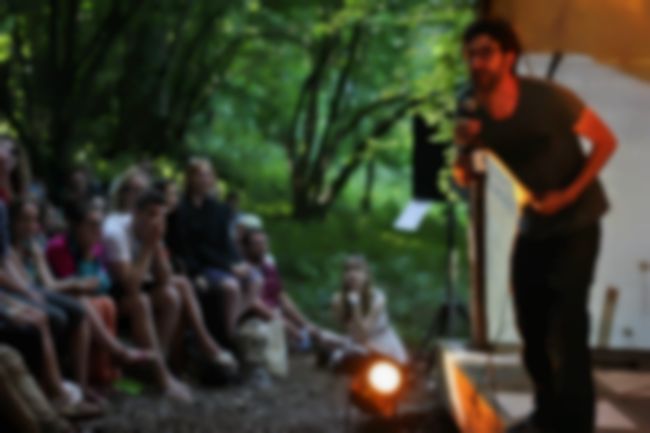 Wandering around the green, leafy site of Dorset’s End of the Road Festival, you’re highly likely to stumble upon something interesting, something inspiring, and more often than not, something with a peacock sat on top of it.

The beauty of the festival lies in the detail, and in the variety of events, activities, sounds and sensations that the EOTR team work so hard on curating with each edition. But with the outstanding line-up of bands taking the limelight, it’s often easy to forget that the festival has a wide range of other kinds of entertainment on offer, so this year, we made a concerted effort to get ourselves to the far end of the site, down a winding path to a forest clearing where comedians such as Robin Ince, Tom Allen and Mark Watson are cracking up the crowd.

A packed audience sits in front of the woodland stage as Mark Watson takes to the stage for a performance which will see him chasing audience members through the woods, mocking men sitting in trees and graciously thanking the audience for being the kind that understand his more ‘intellectual’ jokes. The whole show is rounded off with Watson’s hilarious dinghy punchline (you didn’t hear the rest of the joke? Should’ve gotten here earlier…), so we decided to catch up with the Bristolian to see how his 2013 festival season had been treating him, and to find out about his favourite “indie-kid” festival memories.

Have you performed at many music festivals this year?

I’ve done a few, yeah. Glastonbury, Latitude, Wilderness – there might well be some that I’ve forgotten as well. But now that it’s the end of August, I’m at a point where all of the festivals have blurred a bit in my brain. I used to go to a lot of festivals when I was a student, but it’s a slightly different experience now. My summers now involve being on stages like this, in the middle of the woods. There are more festivals than ever as well, and nearly all of them have some kind of comedy component so someone like me can end up doing a remarkable amount of festival-going these days. It’s like a second childhood for me, when I was 16/17, I used to go around festivals and I’d never dream that I’d be going back one day as a performer, so it’s very gratifying.

Which was the first festival you went to?

I think it was Reading, my first one. In those days you’ll remember that there weren’t that many festivals – not like now – all you had Reading, Phoenix, V and Glastonbury – I did a couple of Readings as an indie kid before I went anywhere else, it wasn’t too far from home and it didn’t feel too scary. It does now! But even looking back, people used to set fire to toilets at night and chuck bottles of wee about. At the time I thought that was just part of it, but today’s festival goer can easily avoid all that! What I went through just to see Super Furry Animals at Reading… I wouldn’t go through that anymore, I could just come to one of these sort of festivals!

This whole school of ultra-gentile, pleasant, family festivals didn’t really exist when we were younger. There were five or six festivals and I went to all of them at various points. And now there are about 50. When you get to the stage where there are two or three festivals in one weekend, it gets a bit ridiculous. But there must be a market, because all of the ones I’ve been to haven’t shown any signs of struggling, so the festival bubble is still expanding. And the weather we’ve had this summer will encourage people to keep going.

What’s the best musical performance that you’ve seen at a festival?

I saw R.E.M. at Glastonbury in ’99 I think, and I’ve been a big R.E.M. fan all of my life. They were the first band I was into when I was about 11, and I only ever saw them that once. Even at the time, I was thinking ‘this is probably it, this is the one time I’ll see them’. It was a beautiful night in a big field in Glastonbury with the moon in the sky, it was one of those moments. And I’m a massive Radiohead fan, if I’d been at the Radiohead gig a couple of years before, it’d probably have been that. But everyone has one Glastonbury moment that they’ll always remember.

Super Furry Animals are a band that I saw many, many times but even in the past couple of years I’ve seen some great things. I saw The Walkmen at Latitude last year. I’ve loved them for a long, long time and I’d never seen them before – they’re tremendous. Seeing a band that you love for a first time at a festival can be a slightly disappointing experience, because not everyone there’s going to be into it and the sound’s not always brilliant, but that was really great. That, and I saw the returning Pulp a couple of years ago at Leeds, so I still have the ability to get excited like a kid by bands in that way. There was a period where, with being a Dad and everything, for two or three years, I hardly went to any live gigs. And because of my own career, I miss everything! But it’s really nice to remember that you can still feel that way about music, there’s nothing like it, really.

Have you had the chance to catch any bands at End of the Road?

I’ve only been here today, and I’m not staying for that long either. Which is a shame, because this is exactly my kind of thing and I’d have loved to have seen Eels and Belle & Sebastian. But my consolation is that I’ve seen them both before, at least. They’re both bands that I used to go and see as a student, and it’s really nice that quite a lot of them are still around.

You always worry that these bands won’t be as good when they come back, I was even worried with Pulp, but you know… Cocker’s incredible. He’s a boyhood hero of mine, and I was really hoping that all these 16 year olds would see how great it was at the time. But with Pulp, no-one had made them do it so it had to be good. It didn’t feel like they were doing it for the money, and they’d been away for ages as well, it wasn’t one of these where people quit and then immediately reformed. So I was confident it’d be good, but you never know! The comeback was very exciting and Jarvis Cocker hadn’t changed at all – I think because he was quite a bit older than us already at that point – by the time he became ‘rock ‘n’ roll’, he was about 38 or something, but it felt like he was a contemporary of ours. That was the thing about Jarvis, you always felt like he was a guy that could’ve been next to you at school. He’s not someone that can ever age.

How did you enjoy your show in the woods today?

It was pretty fun. I was saying earlier that if you looked at this particular area when there wasn’t any comedy on, you’d think it was pretty unwise to put a stage here – it’s just a clearing! But it was a really memorable gig for me. A lot of the festival’s I’ve done have been fun, because you get quite a nice, comedy educated crowd. But this was quite different for me, just because of the setting. A lot of gigs trade on this pastoral thing, in the woods, but to literally be in the woods like this is quite unusual. And the stage is tiny, you really are the closest you can get to performing in a natural environment, so I had a great time. It wouldn’t suit everyone, but the crowd were amazing.

At a festival like this, you get people who really have come specifically – not necessarily to see me, but they knew they were going to see some comedy. At some of the bigger music festivals, people wander in and out, not really sure why they’re there. But here, even the fact that you have to make quite an effort to even get to this bit of the site, no-one was here by accident. So it was really enjoyable, yeah, and I would’ve happily gone on for longer.

And one final question, what are you listening to at the minute?

I’m now months behind – my main thing is Tame Impala at the moment, but again, that’s last year. But I’ve become obsessed with Lonerism, I feel like I listen to it all day. It’s the best new thing I’ve heard for quite a few years and it just keeps getting better – the songs are so complex and strange. I went to see them recently in London and that was great, but on record, the production, the musicianship is just brilliant. And I’m very much looking forward to the new Arcade Fire album. I’m still enough of a music nerd that I’ll look ahead to certain releases, and I’m looking forward to that – that’s been a while coming.