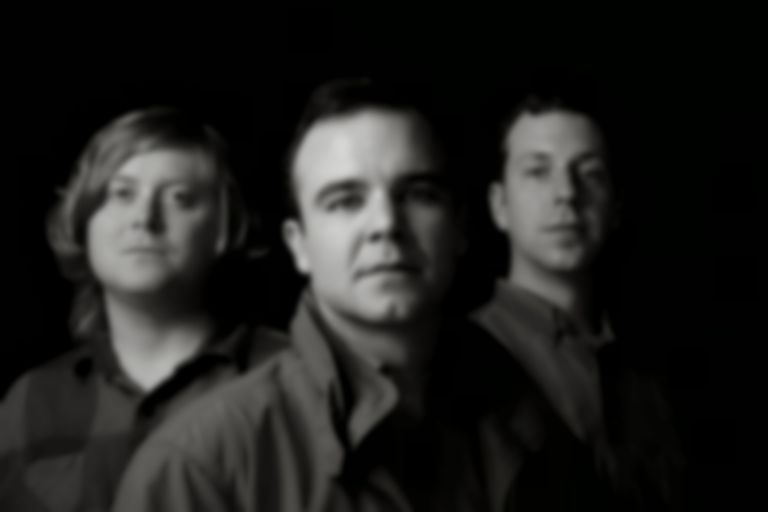 ​For many, the first introduction to Baltimore-based, North Carolina-grown Future Islands will have been the now-notorious Letterman performance. Sliced up wantonly like a med student’s test-cadaver, it’s become GIFified and reduced to memes, with people giggling in mockery or gazing in awe at the debonair dancer. Operatic hand gestures, black metal howls and stylish takes on stage garb have been boiled down like a zesty zeitgeist jus. Frontman and modern-day Baryshnikov Samuel T. Herring isn’t hugely fazed by the inundation of new ears – he takes the ‘any press is good press’ approach – but he is keen to point out that it’s not a one-off.

We got the chance to have a chat with Herring in the wake that followed their fourth record’s release. Singles, their first album on new label 4AD – and a previous Best Fit Album Of The Week – is one of the finest releases of 2014, and perhaps, arguably, the best record of Future Islands’ career. We were also fortunate to talk about their upcoming, sure to be eagerly-anticipated slot at this year’s Field Day on June 8th.

When talking to Herring, it was clear that the man behind the moves is infinitely more interesting. Calm, mild-mannered and well-spoken, he’s the rockstar antithesis. He has a lot to say, and when talking, we often found him hurtling down tangents – albeit utterly fascinating ones – where he ponders the intricacies of life and humanity. He’s got a natural affinity for being a resolute orator, a rare facet, and is able to command the conversation’s mood unconsciously. He’s confident, but as far away from arrogance as you can get. Put simply, he’s a splendid chap.

Our time with him was centred on the froth surrounding Singles, but he has ruminations on festival atmospheres, music criticism and much more too. Here’s the unfiltered chinwag – it’s been tidied up, but nothing’s been omitted or shoehorned. To be honest, we we’d much rather just sit and listen to him talk anyway. ​

So how’s life treating you post-Singles? Has much changed since the release of what many are calling your ‘breakthrough record’?

Samuel Herring: We’re surprised at how well things are going! We’ve had some cool offers for festivals, and to play places we’ve wanted to play for years, and over the past few weeks people who have turned us down before have asked us back. Usually when we play somewhere new we expect like 50 people, and over the last few shows in places like Fargo [North Dakota] and Montana we had like 1500! Even so, ultimately, we’re a band who tour 160 days a year and we meet people first hand. For the most part we’re trying to keep things the same and stay humble.

How do you feel about the reaction it got?

I think for the most part were getting the reaction we hoped for. We really believe in Singles – we feel the same about every LP, but we knew this was the most immediate.

Our previous album, On The Water, is one you need to sit with and think with; in a world where you need critics and peoples’ reviews, you guys [music critics] have gotta sort through so much and in such few listens too, and I feel like it was a detriment there. We knew people would be expecting something upbeat from it and they got this slow-burning LP. We knew it’d catch people offguard but we knew if we put it out against expectation we would free ourselves up for the future. We didn’t want to pigeonhole ourselves and make people expect things.

Singles is an amalgam of everything, the great dance pop and slow-burning nostalgia songs. It’s a complete circle of our styles. I feel like it’s the strongest writing, and definitely the strongest fine-tuned group of songs. We believe that every song has its strength. They standalone with little flourishes, and those touches set each other apart, but in that same sense they all fit together. In the past we have these records that ebb and flow to create ambience, and here it was just about creating the best songs and putting them on a platter.

What was the one thing you feel critics missed? Or were all the bases covered?

On a personal note, some criticism that bothers me that some of the lyrics are cliché, but the whole point is that they’re supposed to be. I’m pushing cliché and making it my own. It’s about trying to boil down pop to its essence by saying something simple in a simple way.

Some people that criticise the simplicity of the lyrics don’t even reference the lyrics in “Back In The Tall Grass”, which is speaking on deep themes. “Light House” is about suicide and having someone talk you out of that situation. They’re so much deeper than some people have realised. It is heavy stuff put out as pop. That’s the beauty. We catch people with brightness you can move to, but with a heavy message you don’t hear for 20 listens or for years later. I – we – don’t always get music the first time. But then again, sometimes we do, and it’ll hit in a different way later. But then people do miss stuff that we find important, but that’s just the way it is, and everyone should have their own opinion.

Do you feel like there’s a lot of expectations for things you do now? Like, do you feel like you’re under more scrutiny in other aspects since having such an acclaimed record?

I usually like to catch people offguard with live shows when they have no expectations. We have high standards and expectations for ourselves, so we push that, but then again we push everything we do as hard as we can. Pressure like that doesn’t bother us as long as we put it on ourselves. It’s important to push yourself and work hard to get what you want.

The tone’s different from previous records, and it’s arguably your “happiest” – not that that’s the exact right word. How did that come about?

There’s a greater deal of optimism… actually, maybe ‘maturity and understanding of life’ is a better term. There are some bright moments – some very bright ones – but I don’t know about happy. “Sun In The Morning” is probably the only ‘happy’ one we’ve ever written. It’s about someone you hate to see leave and love to see in the morning, which we to do have far too regularly as touring musicians. It’s a dissection of those beautiful moments in certain relationships – when I did have that – and with who I made coffee and walked to work. It’s a song about an ideal of love, rather than a physical love that actually exists, so I guess ultimately it’s hopeful. I still don’t know about happy, though.