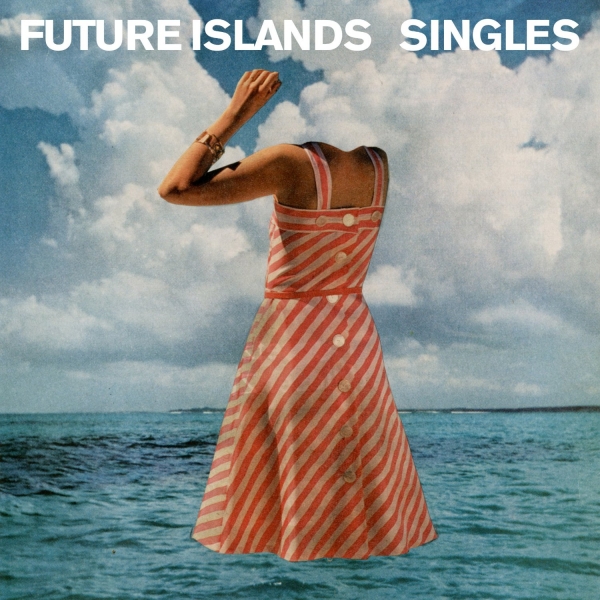 Their previous album On The Water came dropped on Thrill Jockey, but Future Islands – based in Bodymore, Murdaland – for their first record in three years, headed to 4AD to release what’s probably the smiliest (though not that smiley) music of their lives. The majority of the group’s discography, though fantastic, has been in deep-seated melancholia, sparingly tinged with pop and ’80s oomph. Largely introverted and intimate, the noises from the North Carolina natives were never knowingly optimistic, but trading in sadness, they built a successful, plaudit-riddled career. It would appear like something’s snapped inside of the band though, as all these ditties pondering lost love, loss of life and loss in general are now past rather than present. What that means is that Future Islands are done grieving. Well, mostly. They’ve not gone bubblegum or nuffink.

“Seasons (Waiting On You)” doesn’t get as unruly on record as it does live – there’s no black metal roars, for example – but it remains comprehensively wonderful nonetheless. The lyrics are clichéd, but therein lies the charm: it’s such a gorgeously simple song, free of pretension and clutter. It’s equal measures dreamy nocturne and new romantic subterfuge, Pied Piper-ly luring you into a state of bleary-eyed bliss.

“Doves” is stuffed with hooks and ’80s stadium-banger choruses, “Spirits” clanks along with krautrock motifs and hypnagogic niblets, sultry exotica paean “Like The Moon” soothes and synth-sermon “Fall From Grace” revels in shadows (and screams). Despite a very overt over-arcing atmosphere on Singles, Future Islands have ensured that there’s a distinct individuality to every track as well, and that they don’t blur into one homogeneous lump. It’s a thematic anthology rather than a seamless listen, and in all honesty, we kinda don’t want to ruin the surprise by describing every twist and turn. This has the potential to be a very special record that many will hold dear to their heart.

Arguably Future Island’s main draw-cum-USP is the perpetually anti-self-aware Samuel T. Herring. A centrepiece of the synthpop outfit whose voice is somewhere between ham-fisted Shakespearean thesp and a buzzsaw-windpiped headbangin’ metaller, his unique timbre will ensnare your attention like a moth to a flame; before long, you’ll be seeking his wonderfully ear-quenching rubber-band pipes. In terms of appearance (not that you should judge a book by its cover, or more aptly, a band by how they dress) he couldn’t look less like a Topman suited’n’booted frontman that dominates indie-pop/rock nowadays. A cross between Steve Martin and Marlon Brando, he’s 100% atypical. It’s refreshing, liberating and fascinating. It’s endearing too, and rather than alienating like some mad scientist with too many quirks, he manages to be oddly loveable. Just watch the Letterman clip, and you’ll see. It’s this enigmatic charisma that’s the lifeblood of Singles. It’s not by any means the be all and end all of the LP, but it’s hard to miss the frenetic quality he brings.

Singles is an effortless wonder. Each and every track runs its course avoiding any pitfalls: they not once sound laboured or tryhard, and although this is still very un-standard pop, Future Islands fool you into believing this is the bar from which we gauge the charts. It’s got bits that make you shimmy and/or shake, bits to force weeping and bits to grin sans gorm. It’s endlessly positive, even in the darker moments, providing a kind of opiate numbness – it’s all gloriously warm, and no matter what troubles exist in your world, they just fizzle away into the ether.

This is a feel-good bubble Future Islands have created, and they cultivate a dangerous apathy in which nowt else matters outside it. Frankly though, when life’s this good with Singles on, why would you burst it? Why endure harsh reality when you can writhe in subtle pleasures? This isn’t blue pill or red pill, this is blue pill or bleach. There’s shouldn’t be any doubt if Future Islands are an option, so whack this onto your music player of choice and let Earth splutter through its motions as you succumb to melty hedonism.