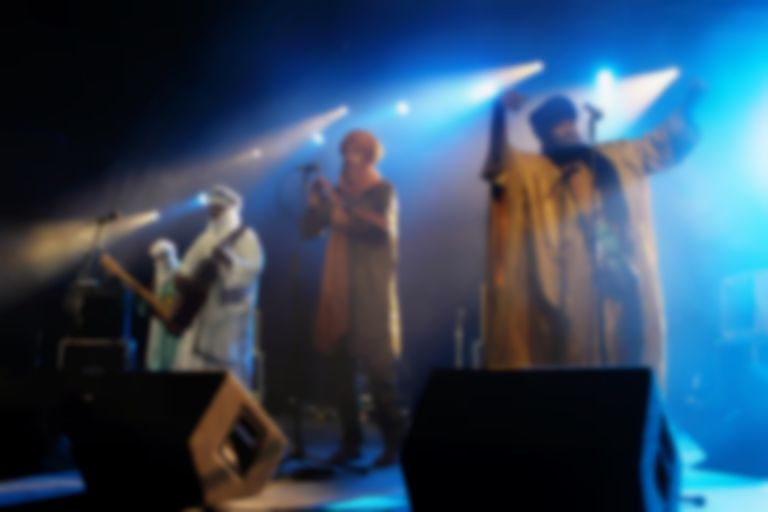 The word "Tinariwen" derives from the Tamasheq language of Mali, and translates in the English tongue as "deserts." It is an apt and no-nonsense monicker for a group founded by members of the Tuareg people in 1979, as they found themselves exiled in the Algerian Sahara after a failed uprising against the Malian state. But anyone presuming this would lead to music as dry and uncompromising as that continent spanning expanse would be sorely mistaken- their music might come from the desert, but its appeal is universal.

To separate the band from the historical and social context from which they arose is impossible, so a quick lesson may be required for the uninitiated. The Tuareg are a nomadic people who have often found themselves at odds with the ruling power of the countries they reside them, be they French colonialists or Arab nationalists. Two years ago, Tuareg separatists seized a significant swathe of land from the Malian Government, but were in turn overthrown by their erstwhile Islamist allies. Tinariwen thus find themselves estranged from many of their Malian compatriots; half that denounce the Tuareg for plunging the country into civil war, half ardent Jihadists who deplore "the music of Satan", which appears to encompass everything from Beethoven to Miley Cyrus. One guitarist was even abducted (but later released), and several other members were forced to find refuge in the United States. This chaos has formed the basis of their latest album Emmaar, with lyrics focussed on the strife besetting Mali, and their outsider status amongst their countrymen.

Of course, not being fluent in Tamasheq, these political subtleties don't necessarily come across in a live setting, although there is often a wistful mournfulness about their newer material. What does come across though is their understated passion, their professionalism and their devotion to finding a groove and running with it. The basic composition of a Tinariwen song rarely differs; a complex rhythm played out on a tindé drum, a simple bassline, electric guitars that never showboat, but play around with variations on a theme. In many ways, their brand of African blues bears some similarity to Krautrock, with its focus on repetition, but there's a hell of a lot more soul here than anything Kraftwerk ever came out with. All of it is compelling, but it's no surprise that it's when they up the tempo that the Roundhouse really comes alive, with many people dancing with an abandon rarely seen at London gigs.

After seeing Tamikrest, another Tuareg band from the newer generation last weekend, I did wonder if Tinariwen were in danger of being usurped by the young bucks. Tamikrest, after all, are more varied in their musical stylings and play with even more energy than the band that inspired them. But after tonight's show it became clear the two bands are doing different but complimentary things- Tamikrest are more open to melding Western rock (and on occasion, even funk) influences with traditional Tuareg sound, but Tinariwen are more authentic, using electric guitars to augment rather than revolutionise the music of their people. So, whilst they might not be the only Tuareg band of note any more, Tinariwen's music remains as dynamic and important as ever, and a reminder that great music can emerge from even the deepest despair.