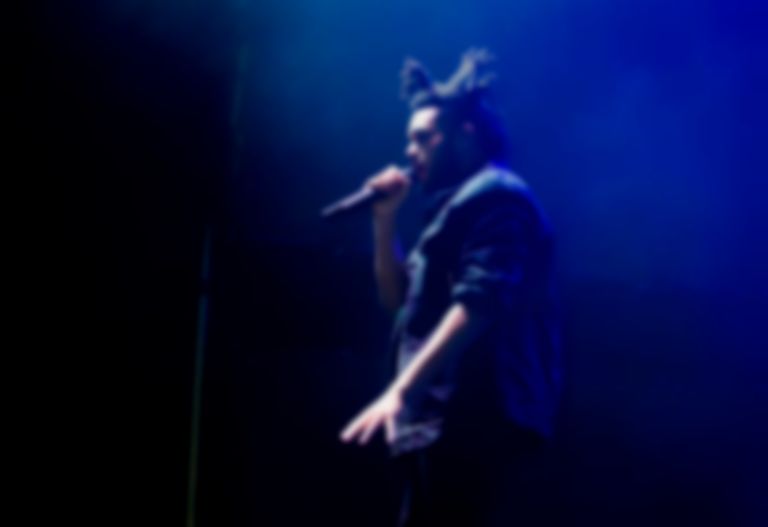 Abel Tesfaye tries to prove his worth at his debut London show. Now with a physical product to shift, can The Weeknd cut it?

Appearances by Abel Tesfaye in the UK have been as selective and fleeting as the fine print on his biography. Nearly two years along, The Weeknd project is maturing nicely but still remains shrouded in a healthy amount of mystery.

With Trilogy finally on the shelves in a physical format and a vigorous marketing campaign in full effect, business is looking rosy although there’s work to be done. The album may have charted (at time of writing) within the US top five but it lies somewhere in the outer reaches of the UK charts. You wouldn’t know it from tonight’s show – there’s hundreds in ready cash for spare wristbands outside but no-one is selling.

Announced only 48 hours ago and largely a fan affair, this ‘secret’ show sees West London’s Supper Club filled to capacity with a mass of devotees. They’re adorned with Weeknd memorabilia – from caps to phone covers to handmade ‘XO’ T-shirts and they know almost every word of every song. It’s not really been remarked on yet just how quickly Tesfaye’s music has connected with an audience and the makeup of tonight’s crowd is multi-racial, multi-generational and multi-tribal.

It helps that Tesfaye is a naturally ebullient frontman. This sometimes jars with the melodrama that’s crucial to Trilogy‘s success but he does the sensible thing and lets the songs, recreated in glorious, accurate sonic technicolor, speak for themselves. The lush vocal that dominates the album succeeds similarly in a live setting, wrapping itself around overwrought lyrical conceits. Elsewhere, it’s his pleasant, smiling Canadian bonhomie that shines through, with home-town Toronto getting numerous shout-outs alongside plaudits to his band members (and even high fives for the audience when it’s all over).

There are glimpses of attachment to the dark themes behind the songs, with a few words claiming ‘Wicked Games’ and the Smiths-sampling new song ‘Enemy’ to be particularly personal. Aside from that, the more conceptual elements of Trilogy are sensibly jettisoned in favour of a show that’s equally ambitious but hits a different series of reference points to the record- those of the stadium greats. There are the beginnings of a very great frontman but Tesfaye is still at the embryonic stage, yet to fully  absorb the art of  showmanship. It’s a minor quibble, yes, but  would transform tonight’s show – fun, technically impressive and well executed – into a truly memorable experience.

It could be shyness and it could be a lack of experience. It could even be the inherent problems with launching a product before you’ve toured (the audience are under his spell from the moment he enters the room). Or it could simply be that sweet Canadian demeanour, the very antithesis of ego and arrogance. Whatever, Tesfaye is reluctant to stand centre stage and embrace the role he’s built from himself through song. There are hints though – by the set’s final third, there’s less movement to the sides of the stage, less banter with the band. By ‘Crew Love’, he’s tilting the mic stand 45 degrees and singing like he’s Axel Rose in Paris in 92. It’s early days – the best is yet to come. And it will.