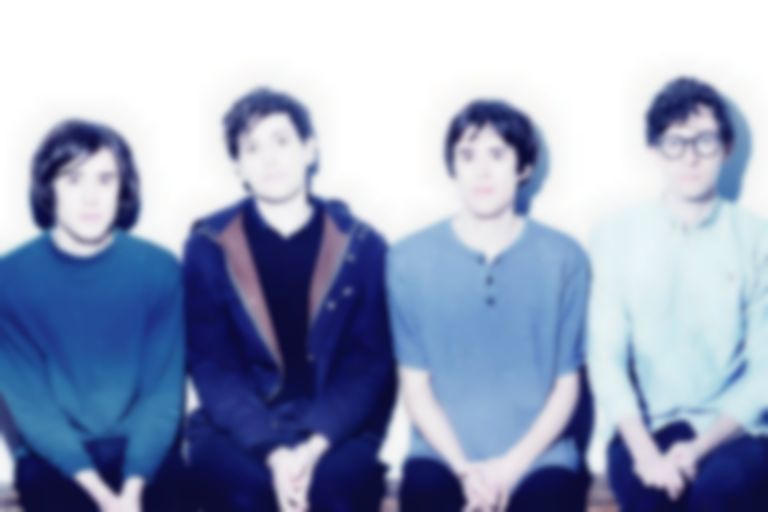 There’s a typical way of starting a show, and then there’s the way The Pains of Being Pure at Heart start a show. A green light illuminates the stage, and instead of the whole band appearing at once, it’s only frontman Kip Berman standing centre stage to huge applause. It’s a brave statement as he bellows forth a beautiful rendition of “Art Smock”, the opening track to the band’s highly-acclaimed third album Days of Abandon. He sings, accompanied only by the electric guitar that he holds in his hands, but delivers the song in such a way that it doesn’t appear that Berman is on some ego trip to steal all the limelight. Rather, the song sounds best when stripped down to its bare bones.

However, it’s not long before the rest of the band come and join him and spread their wings with the shrill indie pop energy that is new single “Until The Sun Explodes”. The stage explodes into a new energy that contrasts spectacularly with the opening number and is a perfect demonstration of the shimmering, shoegaze noise pop that the New York band are best known for. It’s clever, and leaves everyone gagging for a night of indiepop wonders.

The set sees the band explore material from their back catalogue as well as their latest album, with sparkling performances of “Heart in Your Heartbreak” and “The Body”, and although there has been a three year hiatus between the second and latest album, they still receive the liveliest response from the crowd who shriek in satisfaction at the opening riff of every song. It’s as if they never went away. The Scala is packed to the rafters, and some people are literally losing their minds in the ecstasy of the show, and it really seems that the band are truly loved by everyone in the crowd - every word is bellowed back at the stage and dancing ensues throughout.

Berman lets everyone know that tonight is the last night of the tour which has stretched over nearly three months, and in some ways, it really shows. At points, it feels as though the band are going through the motions of what they have done every night for the past few months, which is understandable, as we all know, these things do get repetitive, but it makes the night lose some of its edge. By the time they reach “Come Saturday” - which on record sounds like a noisy blast of spectacular indiepop - it comes across as, well, just a bit underwhelming. It all becomes a bit predictable, as though each song seems to slog into the next, which is a shame, as the show began with such a fabulously understated opening that led you on to believe that there were many more surprises to come. Yet it all ends up feeling a bit safe.

That’s not to say it’s all or disappointing. The bass is so loud it blasts through your skull and makes your hair stand on end, and there are times when Kip Berman and Jess from Fear Of Men’s vocals (standing in on keyboards tonight) are so perfectly matched and intwined that it makes your toes curl with the prettiness of it all. There is no stopping yourself from being dragged into their dance-inducing charm, and the night sees moments that shimmer and twinkle like a disco ball at an indie pop party. It’s just a shame that at times it seems that the disco ball stopped turning.