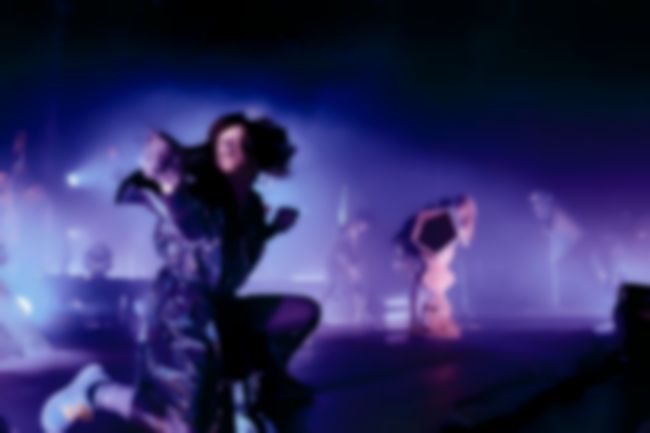 One shouldn’t expect a metaphorical walk in the park from a Knife show. The siblings’ approach to the medium of performance has always been accompanied a certain Scandinavian guile and the ‘staging’ of dance music remains a central concern to The Knife as a live proposition.

That conundrum was tackled with a sense of parody and humour by fellow Swedes Air France and The Tough Alliance – the former veered mainly towards DJ sets while the latter resorted to simply playing back their tracks on the venue PA while projections, lip syncing and swinging baseball bats replaced any attempts to recreate their largely synthetic sounds.

So one shouldn’t try and appraise tonight’s show on a musical level although some skill may lie in the creation of toothsome arrangements that push the blister and pop of The Knife’s sound. It’s largely a moot point though considering the audio is delivered via a backing track and largely mimed vocals for the majority of the evening.

They’ve done this before of course and many have come prepared with that knowledge. Of those who don’t know, the surprise either turns to frustration (there are a few walkouts), resignation or joyful glee at the more conceptual elements on stage.

The band promised “a place, a scene, a moment” aligned to the titular intent of marmite long player Shaking the Habitual for the accompanying live experience and this tour comes come loaded with a manifesto that asserts “this is not every day” and a desire to break the audience out of “the habitual dance of the ordinary, the narratives of the normal”.

Thus the 3,00 strong Roundhouse audience is exorcised out of any metropolitan mid-week lethargy by a session of “Death Electro Emo Protest Aerobics” courtesy of an over-enthused instructor. As a prelude to the main event, it’s an entirely tongue-in-cheek gesture that goes some way to dictating the night’s mood. “I think we will show some humor in our live show…it has to be fun,” Dreijer-Anderson told SPIN earlier this year and at least no-one can accuse her of po-faced pretension.

After ‘Cherry on Top’ provides a cacophonous opener – slow burning until a full band of hooded figures line up for ‘Raging Lung ‘- we get Dreijer-Anderson’s voice operating at full power: a beautifully shrill husk in one moment, an enchanted melodic pipe in the next. But it’s the opening beats of ‘Without You My Life Would Be Boring’ that sees her (if indeed it really is the woman herself – no-one is really sure) take commend of the stage; a joyful, percussive-heavy troupe in glitter and face paint. She drops to her knees in front of them and an aerobicised tribalism shakes the Swede and her band all the way to the track’s end.

It’s a dynamic that permeates the rest the set – a selection of tracks heavy on Shaking the Habitual with a few entirely appropriate additions from the duo’s first three records. ‘One Hit’ strikes a lively note with some of the best onstage action of the night. ‘Networking’ finds a return to the stark lights, darkness and backing track motif of earlier Knife shows. ‘Got 2 Let U’, the one Deep Cuts song given an outing, is accompanied by a gilded projection that blurs those gender lines the siblings love to play around with in a way that’s both hilarious and preposterous.

A closing ‘Silent Shout’ goes some way to appeasing the ambivalent among tonight’s audience. Those at the front might be more forgiving of the backing track and stage antics but the cavernous Roundhouse struggles to accommodate the show’s intentions, especially for the further-back crowd. And what remains at the end is all about the subjective: tonight is an experiment of sorts and fans in thrall to the trebly electro-pop of the band’s 2001 self titled debut or Deep Cuts from two years later are visibly disappointed by the set choices and execution. If you were to claim tonight’s show as the worst thing you’d ever seen, that would be a perfectly valid opinion (and at £30 a ticket, many will). But some will claim the opposite, and they’re kind of right too.

Embrace the fun of the show, get lost in the ridiculousness and maybe you’ll be some way to getting it. Whatever it might be. Escape from the mundane? A bit of colour on a Wednesday night? Or just some frighteningly staged am-dram dancing? It’s all that and more. It’s a place where the Swedish duo feel like they were always heading and although the collision of the abstract and sensory struggles to connect at times, it remains on a basic level just very good fun.