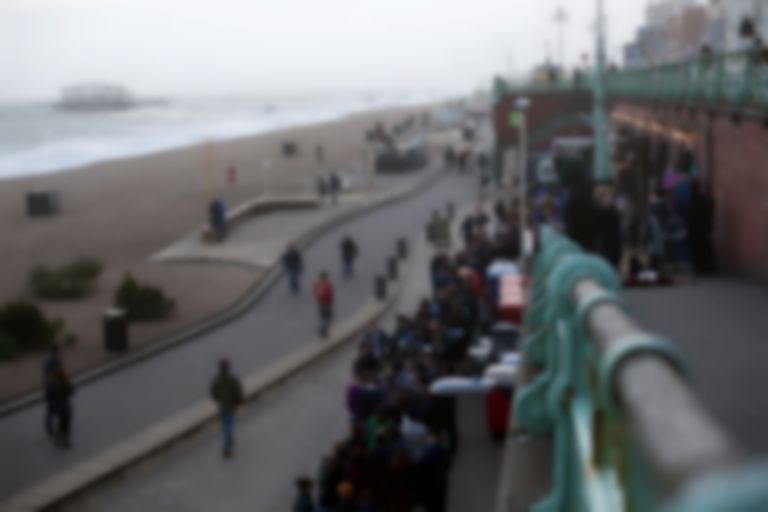 Having safely returned to their homesteads from the blustery shores of Brighton, George O’Brien, Thomas Hannan and Charlotte Krol feed back on some choice performances from the last day of The Great Escape festival while Howard Melnyczuk and India Whiley-Morton send in the photos.

Canadian singer-songwriter Andy Shauf opens the final day of the festival with introspective lyricism and worn-down electric guitar plucks. Guitar and man stand guarded over a packed Blind Tiger Club, Shauf’s delicate palette triggering between deep-seated hums and airy falsettos. As his eyes glaze over the crowd, the natural flow of his clanging guitar and half-sung/half-whispered voice recalls the lone wolf character of Elliott Smith - all haunting and quietly powerful. A somewhat unnerving though arresting start to the day. CK

Also flying the flag for Canada at The Great Escape are dark shoegaze/psych rockers Powder Blue, who take a little nervously to The Blind Tiger’s Club’s stage. The nerves - or mistakable excitement - are superfluous to the utter power of the band’s music. “Dream In Black” is resplendent in drone, tumbling rhythms and flowery guitar lines, topped off with stunning Revolver-era The Beatles harmonies. Admittedly, there’s a tangible lack of confidence that will hopefully be eradicated by virtue of continued gigging, but it does little to take away from the pure enjoyment of watching the band play. Their first release in the UK, “Run”, has an unreal live crunch, with audience members throwing around audible praise at the close. CK

Malpas brought their electro-pop flavour to The Mesmerist. A hitherto unknown quantity, the two Brits are tight and write subtly moreish tracks: drum machines click away beneath FX-heavy looping guitar, mandolin and a The Postal Service-esque vocal. “Charlemagne” stands-out as the catchy highlight from an early set that kicks-off the day with a smile. G’OB

The Wet Secrets, from Edmonton, Alberta, are on a confusing mission to make marching band outfits sexy. The crowd at the The Blind Tiger Club seem understandably bemused by the whole situation, and yet unable to take their eyes off’a it. What with each member dressed as if they’ve been cast in a saucy X-rated remake of Brassed Off, it’s certainly a spectacle, and it’s fun to see their unashamedly kitsch, endearingly ramshackle take on camp rock ‘n roll a la The B-52’s make some new friends. TH

Gutsy rock and roll devoid of refinement but not at all lacking in self-belief or sheer force is Mise En Scene’s game. They earn points initially for being the first people at the festival to not lather their guitars in deadening reverb (if one thing is “in” this year, it’s fucking reverb), and further add to their tally when frontwoman Stefanie Blondal Johnson starts to sing. She has an arresting, wistful yet soaring voice that carries each and every one of their songs to a place lesser vocalists would never be invited. The glam punk vibe is added to with shiny gold jackets and a fair helping of old fashioned crowd baiting – we can only assume the reason people don’t clap along as instructed is that this Blind Tiger crowd are still recovering from Friday (it’s quite early in the day), but will hopefully remember this as one of Saturday’s highlights. TH

The prettiest audience members in attendance this year are the porcelain-faced Icelandic beauties out in force to watch Samaris at Above Audio. This shallow observation may be just that if were not for the stunning music that matches it. Jófríður Ákadóttir’s vocals dance above the sparse electronic arrangements and clarinet billows of her bandmates pÞórður Kári Steinþórsson and Áslaug Rún Magnúsdóttir, sounding scarily close to the sharp, impressive production of their records. Ákadóttir is adorable and self-deprecating on stage though possessed whilst in song; the warped jitters of “Góða Tungl” causing her to close her eyes and throw her chin to the sky. It’s an understatement to say the audience is hypnotised. CK

Cheerleader play with smiles on their faces and their crowd dutifully smile back. It’s difficult to know where to place them; at one moment they seem to be able to channel bands as critically revered as The Wrens, The Shins and Iron and Wine, the next, they’re singing choruses that one could only accurately illustrate with a Dawson’s Creek montage. On their first trip to Brighton, they ooh, aah and whistle their way through a set of densely tuneful indie rock. “Perfect World” is the epitome – like a more muscular Shins, if the image doesn’t disturb too much. TH

Belfast brother and sister duo Southern have been justifiably on the radar for over a year now. Punchy, blues-filled guitar riffs form the centre-piece of their work, with tracks like “Just Think About It” and the fantastic “Where The Wild Are” standing-out at Sticky Mike’s Frog Bar. Rich, folky harmonies bring to mind Angus And Julia Stone while their knack for a hooky chorus - highlighted best by the latter of the two aforementioned numbers - puts them alongside touring partners The Kooks. It may be an unpopular comparison, but the catchiness is undeniable and Southern carry a level of instant likability that the Brighton four-piece lost. Eyes on these two. G’OB

Ever since emerging with what still feels like a monster smash hit, “Real”, early in the year, it was massively apparent that Years & Years were on to something; the frontman’s combination of mind blowing, soul-infused vocal and boundless live stage presence makes him impossible to ignore as the London three-piece bring to mind the likes of Disclosure, Bondax and even moments of SOHN/James Blake production. A rendition of Sean Paul and Blu Cantrell’s 2003 chart-topper “Breathe” is a brilliantly nostalgic, ironically fun cover from the band. It feels like we will see a lot lot more of them. G’OB

LA-based Dutch singer, producer and visual artist Nick Van Hofwegen aka Young & Sick has been something of a mystery over the last few years with the odd collaboration (MMOTHS’, “For Her”) here and there. Since singing to Capitol Records earlier this year, his name has popped up time and time again in the blogosphere, and with good reason. Van Hofwegen’s performance tonight, bouyed with three backing members on keys, drums and synth, is brimming with big electro soul, sunshine pop and RnB, carried confidently by his incredibly accomplished vocal. “Glass” is contagious with bounding funk rhythms, effortlessly cool synth gloops and soulful harmonies - pop at its finest. CK

The songs of Mammút aren’t the most well rounded pieces, but ideas abound. Looking like they’ve recently emerged from a very glittery swamp (when they’ve actually just got off the plane over from Iceland), their music ranges from post-punk with an infectious pop nous - a la countrymen The Sugarcubes – to opaque goth atmospherics that bring to mind The Smashing Pumpkins having a particularly bad time. Humble though she comes across, the focus can’t really be anything other than frontwoman Katrína Kata Mogensen and her remarkable voice, which has a way of cutting through the fascinating fog of her band’s music that one suspects might border on witchcraft. In virtue of being on just before Future Islands, they play to a packed house at Digital, and can count us among their new admirers. TH

Morrissey trying to clear his throat for 45 minutes? Henry Rollins at a disco? Everyone at Digital had their own take on Samuel T. Herring of Future Islands’ inimitable, aggressively romantic attitude to fronting a band, and though many of the descriptions might seem a form of mockery, you can be assured that for these guys, there was nothing but love. To say the songs become a bit of an afterthought is harsh, but Herring is clearly the focal point – even if the tunes were dreadful, to watch him growl, wail and croon his way around any style of music would remain a huge delight. Thankfully, Future Islands’ songs are largely really great. You know that Letterman performance, yeah? He dances like that all the time. And that “Seasons (Waiting On You)” song? That’s not even their best one! That honour falls to “A Dream Of You And Me”, its tale of staring at the sea being gifted an extra poignancy by being performed mere feet away from the English Channel, though “Seasons…” is certainly up to the task of becoming the festival anthem this crowd clearly wanted it to be. After reserving judgement about this much-discussed quartet until I finally got to see them for myself, I’m well and truly won over – this was an excellent, excellent gig. TH