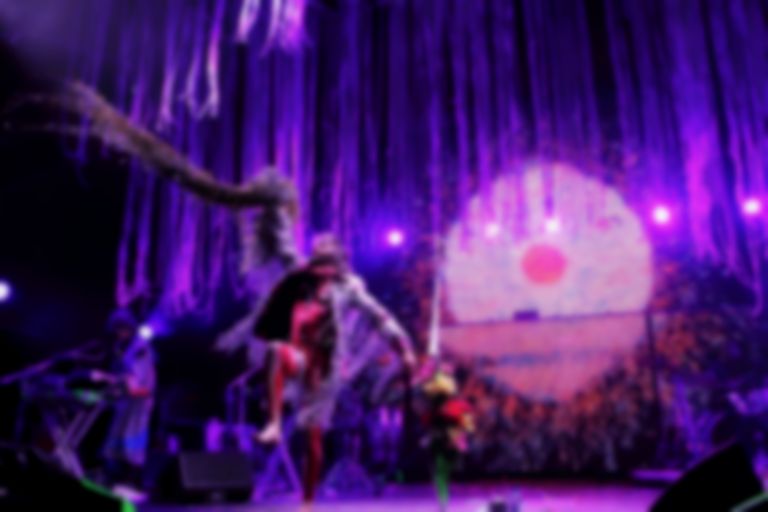 Photo by Photo by Burak Cingi

​Lights, confetti, inflatables, a body suit showing off bones and sinew, the giant hamster ball, glitter…you certainly know when The Flaming Lips have rocked up to a festival.

​As the plaintive notes of “The Abandoned Hospital Ship” gave way to booming drums and riffs, the Oklahoma psych veterans launched a giant balloon with the words “Fuck Yeah End Of The Road” out across the audience and threw themselves into wonderfully communal versions of “She Don’t Use Jelly” and “Yoshimi Battles the Pink Robots, Pt.1”. Confetti continued to fall and giant inflatable maggots danced away as Coyne and co. treated the crowd to a brilliant take on “The Golden Path” (originally performed by Coyne and The Chemical Brothers) and just continued to throw out one great pop song after another. Sure, the band has gone off into “interesting” territory of late with records like Heady Fwends, which are full of psych/noise excursions to the limits of your patience, but speaking before the set Coyne expressed his wish to make festival sets as inclusive as possible (as well as being able to, as a band, watch other acts play and party as much as they possibly could) and he certainly achieved that with the help of his excellent band.

As much as I love to hear Steven Drozd play guitar, I don’t believe a Flaming Lips set truly comes to life until he gets behind a drum kit and from the moment he took his rightful place for “Race For The Prize” and “The W.A.N.D.” the show really came to life, the sound suddenly booming out from the stage as Coyne appeared first in his hamster ball in the audience, then atop a moving platform holding a doll and serenading it with a tender version of “Do You Realize?” before a blazing, explosive cover of “Lucy In The Sky With Diamonds” - while Sean Lennon, no less, watched from the wings.

When it comes to an end-of-the-world party, the only band you’d ever want is The Flaming Lips. This wasn’t the end of the world, just the end of another brilliant night at End Of The Road.