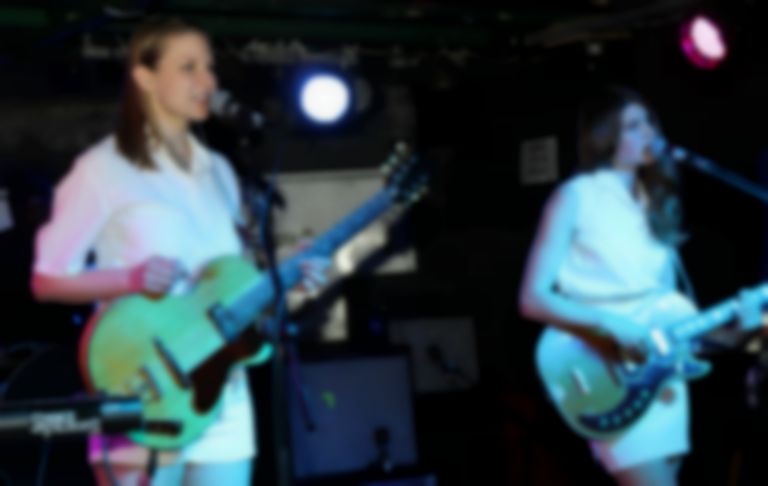 Some eighteen months after having last played this venue, Katherine Blamire – one half of the now London-based duo, Smoke Fairies – recalls having gone out into York before the show in search of some education and history. She happened upon the city’s Jorvik museum and that experience had freaked her out, taking her back into childhood and the recurring dreams she then had of mannequins wanting to set her on fire.

This rather bizarre anecdote – delivered half way through a towering 16 song set – creates a strange resonance with the music of Smoke Fairies. Now almost seven years into a recording career that has already spawned four albums, their sound mines the rich, traditional seams of blues and folk. To that broad template they have added strong elements of psychedelia and pop and laced it all with a lyrical imagery that embraces such themes as religion, isolation and destiny and what are the contrasting shadows and light of the human condition.

The penultimate “Hotel Room” and “Summer Fades” aside – the latter nestling in the middle of the set rather unobtrusively yet almost prophetically given the pouring rain outside and the general vagaries of our British weather – the show is drawn entirely from Smoke Fairies’ last two long players, 2012’s Blood Speaks and this year’s widely acclaimed eponymous release.

Despite the marked shift in musical emphasis that took place between these two records - one whereby the band made a conscious decision to strip back their songs to their purest form, losing much of their more ethereal trademark sound in the process – when this material is played live such differences start to disappear. In their full band format, one in which Blamire and her musical partner Jessica Davies are joined by three gentleman touting bass, the most rousing of drums, keyboards and an occasional violin, the Smoke Fairies’ sound becomes a much more muscular beast transcending all of those early fey folk epithets.

“Eclipse Them All”, all spatial slide guitar and a dirty slithering groove oozes suppressed sexuality; with its plaintive violin, out-there cosmic vibe and the perfect coalescence of Davies and Blamire’s voices, “Feel It Coming Near” edges back into the late ‘60s and the progressive psychedelia of It’s A Beautiful Day; “Let Me Know” reaffirms the fact that Smoke Fairies can really rock out when the occasion demands; and Blamire’s spiralling guitar solo on “Hotel Room” is positively lysergic in the extreme.

Perhaps fittingly, the last track from the Smoke Fairies album - the achingly beautiful, piano-led ballad that is “Are You Crazy?” - closes the set. Though there still remains time for a richly deserved encore of first “Film Reel” and then the spectral apparition of “Blood Speaks”, both of which are far nearer to Smoke Fairies’ original folk roots than any other song this evening and when cast beside all that has gone before reinforce just how far this ever-evolving band have travelled in such a relatively short space of time.

Setlist
Shadow Inversions
Eclipse Them All
Feel It Coming Near
Waiting For Something To Begin
Version Of The Future
SummerFades
Hope Is Religion
Want It Forever
Let Me Know
Misty Versions
Your Own Silent Movie
We’ve Seen Birds
Hotel Room
Are You Crazy?
Film Reel
Blood Speaks