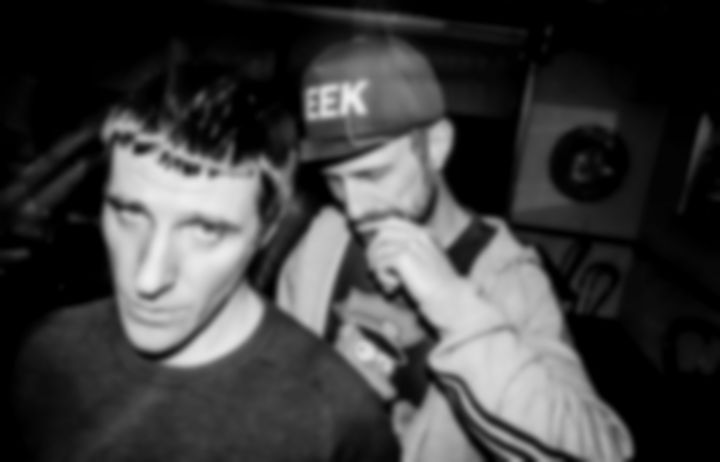 Even on the hottest day of the summer and in one of the worst-ventilated venues in London, it still takes some getting used to seeing Jason Williamson sip from a bottle of water. The 43 year-old voice of Sleaford Mods has built a career on yelling tales of proletarian disillusion and heavy substance abuse, yet tonight he’s a paragon of professionalism. Is this the start of Sleaford Mods: The Yoga Years?

Mercifully the same can’t be said of beat marshal Andrew Fearn, standing beside his conscientious bandmate decked out in a vintage Beastie Boys shirt. On record, the 42 year-old contributes minimal Suicide-style synth productions that are an integral component of the twosome’s lo-fi aesthetic. Live, Fearn knowingly plays on his redundancy, doing little more than gormlessly swig on a bottle of beer and press the play button to get us underway bang on 10pm.

Sleaford Mods spend the next hour doing what they do best, delivering savage stabs of bleak social realism and even bleaker humour (albeit with a disappointing dearth of crowd interaction). All those comparisons between Williamson and John Lydon are certainly apt. On tonight’s evidence though, another point of reference to throw in the mix is probably Colin Jerwood from ‘80s anarcho-punk outfit Conflict.

The thing is, nobody’s ever really made working class alienation this funny before, and it’s here that the Mods have carved out their niche. Williamson couches his spitfire rage in the relatable and the absurd. So on Jolly F_cker, there’s impotent frustration (“I got a job, I rot away in the aisles of the Co-op mate, no prob”). On The Wage Don’t Fit, it’s righteous indignation (“You’ve got a sun tan and I’ve got what? A piss pot and we all get a free cream cake on Friday”).

How remotely relatable any of this is for tonight’s North London audience is debatable. In fact, there’s an uneasy sense of class voyeurism amidst the assemblage of journalists and cultural luminaries as Williamson directs relentless invective toward the drudgery of a lower-rung life they probably never had. It isn’t so much what Williamson is saying that has everybody nervous; it’s the fact that, despite the humour, he does an extremely good job of acting like he means it.

Of course, this is what got the Nottingham-based pair here in front of everyone in the first place. The real question is how they make an impact in bigger venues than the upstairs sweatbox at the Lexington. After all, it’s hard enough to imagine Sleaford Mods’ scruffy backing tracks translating to bigger spaces, but harder still to envisage Williamson delivering his diatribes from an arena stage.

That said, the Mods have apparently already plotted an offbeat tour of places like Scunthorpe and Wakefield for next year; towns where bands like theirs should have no trouble whatsoever making themselves heard.