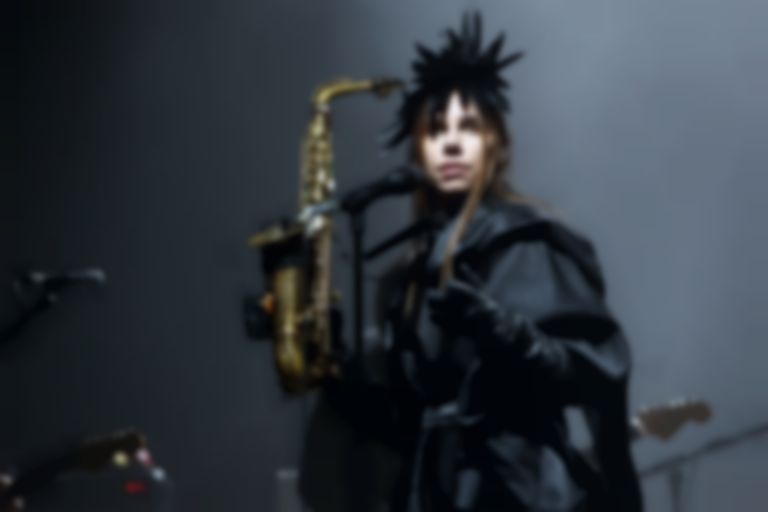 On The Hope Six Demolition Project, PJ Harvey seemed to elevate the album above the common place.

That's not just because of the record’s deeply conceptual beginnings, stark explorations of the human condition, or publically accessible and demystifying Somerset House recording process, but because it saw a full artistic realisation. It seemed to just exist in a way many albums do not.

Tonight (30 October), at London's Brixton Academy, Polly Jean pulls off a similar feat - transforming what could have been just another gig into something so much more; something theatrical, something marked by ceremony, and so full of purpose. In every way, tonight is a performance.

The ominous thud of a solitary bass drum gives way to rattling snares as ten musicians, all dressed in black, emerge in a line as if part of a funerary march. They clutch their instruments close as the saxophone’s deep bellows mark out the opening moments of “Chain of Keys.” From the back seats, it’s not even immediately apparent Harvey is among them – falling into line with the brass section with no pomp and all the poise.

Only when the elongated introduction has run its course does Harvey step forward - a saxophone held casually aloft in her right hand, a microphone clasped in the other. Her voice is perfect, its elegance and power matched only by the singer’s movements. She gestures towards the crowd - the long, flowing sleeves of her outfit emphasizing the drama of such incredibly structured choreography.

As the short lived vocals reach their end, Harvey carefully falls back in line with the brass band. It’s a move she makes a lot this evening - one that feels humble, full of reverence for the music, and respect for her incredibly talented band. The reverence transfers to the audience, whose wild yelps are reserved for moments they are certain a given song is finished, and occasionally for those moments where Harvey, seemingly demanding answers, prowls closer to the edge of the stage.

The stage layout somehow seems to resemble their Somerset House recording studio - that is to say it’s intimate, a little bit insular, and set back from the front of the stage. As the incredible - Hope Six Demolition Project heavy - set continues (with “Ministry of Defense”, “Community of Hope”, “The Orange Monkey”, and “A Line in The Sand”) the sense of drama and ceremony heightens to the point where you feel almost as if you’re watching an Opera.

As songs from her previous album are slowly added to the mix – the shimmering cymbals of “Let England Shake”, the sombre male chorus of “The Words That Maketh Murder” and swaying rhythms of “The Glorious Land” all proving early highlights – it becomes apparent how brutalist and imposing Hope Six Demolition Project sounds in comparison. Just as the stomping saxophone solos give gravitas to the newer compositions, the bands movements give gravitas to the saxophone – each band member turning their backs to the audience to face the saxophonist as a white spot light makes the brass gleam.

PJ Harvey seems to have done something most artists would struggle to do in a venue like this. To have created a space so uniquely hers and to have welcomed us feels like a privilege – as does being treated to a mix of numbers from White Chalk, Rid of Me, To Bring You My Love and Is This Desire? For none of them to feel out of place amongst the newer material whilst being so stridently different feels so rare. But then PJ Harvey is a rarity, and her respect for the craft and artistry is uncommonly evident.

“The Wheel”, “50ft Queenie” and “To Bring You My Love” bring a sense of urgency to proceedings - each intense, doomed, desperate, angry, hopeful, and full of intent.

The lights - which have only been either white or yellow throughout - settle on a final mustard colour as the gospel hums of “River Anacostia” begin to reverberate around the ornate and vast echelons. The synths give an otherworldly surge, whirring against the gentle impending drum beats and providing static through which Harvey’s voice cuts. The imposing concrete brick like structure of tonight’s backdrop, (which must have been designed to emphasise the war-torn, derelict themes of Hope Six Demolition Project), begins to disappear - as if descending into the depths of some hellish underbelly.

Harvey’s vocals almost falter at the highest point of her solo before they fall away and suddenly all ten musicians are at the front of the stage sharing microphones. The instruments subside and the ominous chanting remains. The song finishes and a long pause manifests before they bow, and reform their funerary procession – exiting stage left.

A long-demanded encore offers up “Highway ‘61 Revisited” and “Is This Desire?” in what seems like an attempt to thank Harvey’s loyal fans. In fact, the only words she speaks tonight - other than when introducing her band - are to humbly say thank you at the end. With a final bow and her beaming smile, the spell and fourth wall are broken. Tonight’s performance may be over but the artistic realisation of Polly Jean Harvey will long continue.