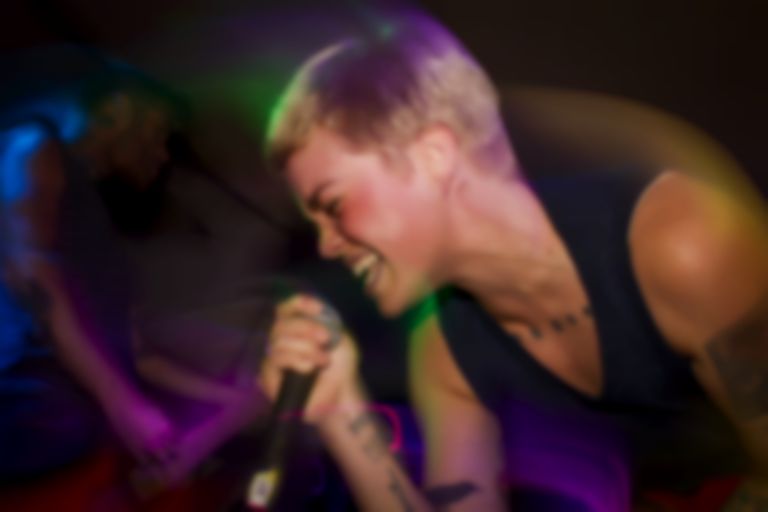 Last Thursday, Syracuse five piece Perfect Pussy stormed through a packed-out show at London's Tufnell Park Dome along with regular touring partners Joanna Gruesome. The Dome is a strange venue that's bolted on to an Irish pub. Perfect Pussy are a politically-charged noise-punk band. The brief set further crystallised their reputation as one that's truly worth seeing.

Charging through a set list that ran, pacing, over Say Yes To Love - the debut 2014 full-length  that you should buy and listen to immediately if you haven't heard it already - Perfect Pussy played violently, and were compelling and energetic. Layers of noise were stacked atop each other, forming the platform for singer Meredith Graves' impassioned and captivating performance.

Occasionally Perfect Pussy would belie what was underneath that screeching, layered surface - uncompromisingly positioning that infectious energy as a block to the structure and melody that's to be found on record. The normally-catchy “Interference Fits”, for example: if you didn't know it well you might not have known it at all. But that is not criticism exactly - it would be absurd to suggest the band sacrifice their performance for the sake of sounding exactly as on record. There are, of course, different kinds of appreciations to be taken from the live event.

An unquestionable highlight arrived right at the end. As the rest of the band began to pack away, Graves stood, surrounded immaterially by hissing feedback and humming white noise, and began to strike herself with the microphone. The room kept itself quiet for what felt like the culmination of everything that came before: populated only by the martial drum-beating Graves had created with her own body. More potent still than the music that preceded it, Perfect Pussy evoked the challenging heyday of industrial and recast it for 2014, ending the evening consistently on a note of highly political, highly personal, and highly memorable.