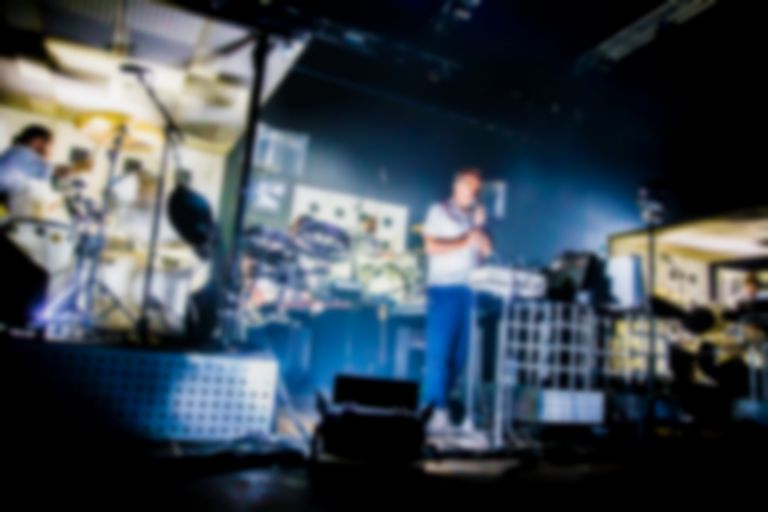 Kraftwerk’s Ralf Hütter has always described his own band as “musikarbeiter [musical workers]”. Having witnessed the Transient Program for Drums and Machinery live show at London’s Roundhouse, that description feels entirely apt for Soulwax.

Working as a reflection of the recording of From Deewee, which in turn was symbiotically inspired by the live show itself, the Transient Program for Drums and Machinery show delightfully exposed Soulwax’s creative tools and processes. Given the stage’s monochromatic, laboratory-like design (of drum booths, synthesizers and From Deewee’s binaural head) and thematic undercurrents of symbiosis between live performance and studio recording, the show moved way beyond the realms of the traditional concert and, in fact, worked as a captivating live art installation.

Seamless in nature, there was a stupefying brilliance to be found in almost every second of their seventy-five minute set. From the imperious stomp and voyaging synthesisers of “Do You Want To Get Into Trouble?” to the graceful and melancholic fade-out of “Goodnight Transmission”, Soulwax’s set displayed a masterful control of tempo and dynamics, analogous to how a DJ may perform an epic and transportive club set.

Sumptuous, hypnotic sequenced grooves (found on the likes of “Missing Wires”, “Conditions of a Shared Belief” and “Transient Program For Drums and Machinery”) were mixed with duelling drum-battles (“Is It Always Binary”), motorik beats (“Here Come The Men In Suits”) and deliciously constructed peaks and drops, through the use of filter sweeps and multi-layered drum rolls. “Krack”, in particular, provoked hysteria amongst an audience dumbfounded by the technical brilliance on display.

Given the seamless quality to their set and the perpetual energy generated by the three drummers, there was very little room for respite. “Glass”, partially provided the set’s only real moment of rest (encore aside) as slow, carousels of harmony bounced across the iconic venue’s rounded walls. Yet as the synthesizers began to spiral into hyperdrive, it became evident that “Glass” only served as the prologue to a breathless and ferocious second half. Set highlight, “The Singer Has Become A Deejay”, showcased waves of percussion and bass, before frantically hurtling into a run of tracks, which included, “Here Come the Men In Suits”, “E-Talking”, “Miserable Girl” and “NY Excuse”.

As “NY Excuse” rose to its awe-inspiring climax - a crescendo of cymbals and frightful electronic stabs - a giant chrome, revolving binaural head arose from behind the central drum booth enveloping the dance-floor with brilliant, refracted light. Although impressive as a seismic design feature, the stage design’s true beauty actually lay within the retro-futurism of their lighting rigs, drum booths, and precise light show.

Stephen Dewaele’s introductory words to the Roundhouse included, “No drums, no synths, no fun without these things”. Soulwax, with their multitude of synths and drums, therefore provided an abundance of fun. To limit one’s description of the show to just “fun” however would be dangerously reductive. In reality, the show was an impressive, artful and exciting representation of how electronic music can be expanded and brought to life. The memories created through witnessing the Transient Program for Drums and Machinery live show at London’s Roundhouse will long outlive the weekend it was performed on. It’s true what Soulwax say - “part of the weekend never dies”.