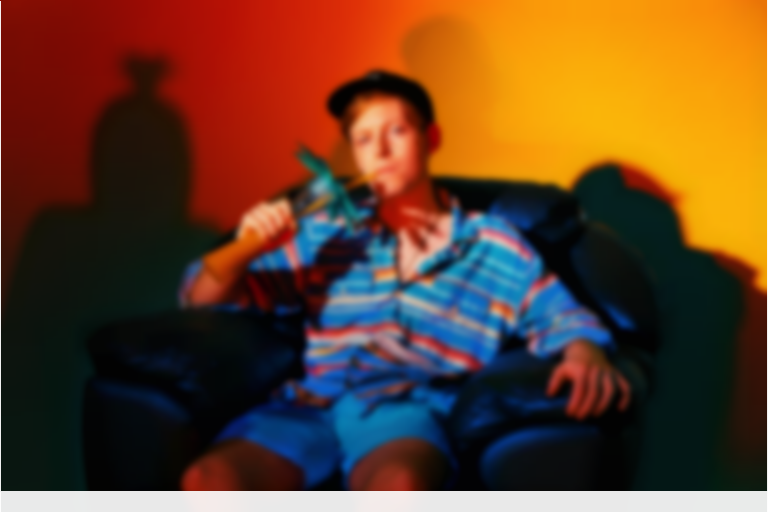 South London’s Niall Galvin, who has caved out a neat technicolored groove for himself under the moniker Only Real, suffered a rude awakening in the run up to his show at London’s 100 Club. Despite having a slew of gigs lined up across the UK, Galvin was forced to cancel nearly the entirely of the tour due the bottom falling out of the funding underpinning it, but he saw fit to go ahead with his schedule London date and, being the very embodiment of the type of buoyant music he creates, it was impossible for the aforesaid (non)touring situation put a damper on tonight’s appearance.

As soon as Galvin stepped on stage he unlocked his box of tie-dyed treasures, swaggering into “Get It On”. Following up with a breezy airing of the majority of this debut album Jerk At The End Of The Line, Galvin playfully finger gunned at the jostling crowed as he delivered a run of stand out tracks by way of “Backseat Kisses” and a storming rendition of “Pass The Pain”, brimming with satisfying teenage exuberance and landing like the musical equivalent of pulling a wheelie on a knackered BMX in front of your new girlfriend.

Launching into “Yesterdays”, Galvin had hit his stride, cheekily grinning at the bobbing pool of day-glo caps that littered the front row, echoing the scruffy, self-referential delivery of the likes of Jamie T. Segueing into “Can’t Get Happy”, a song that saw the crowd emphatically singing along to the point where Galvin was able to leave the mic and high five the front row in between verses, he capped off the night with “Cadillac Girl” to a sea of sweaty whoops.

If last night's show was anything, it was surely a testament that Only Real is living proof you can’t keep a good man down.