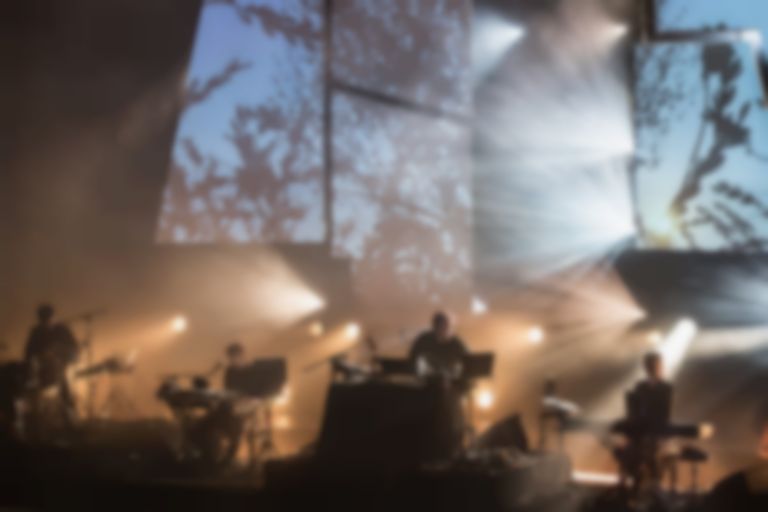 Tonight’s sold-out gig at the Barbican is no ordinary one, a fact not lost on the swathes of people filing into the venue’s sizeable hall. Excited chattering anticipates what is set to be one of the most fascinating performances of the year, a level of fervour usually reserved for more traditional shows as opposed to concept-rich, challenging electronic music. The cult of Oneohtrix Point Never is growing, and the crowd are anxious to watch Daniel Lopatin’s self-proclaimed ‘concertscape’ MyRiad transpire before them.

The stage is minimally dressed; a set of fractured trapezoid and rectangular screens hang at the back, four performance positions are set up in a line, and hanging above are two alien sculptures, sort of like bastardised versions of H.R Giger’s xenomorph, gradually rotating to reveal their full grotesque nature.

The influence of Kubrick’s 2001: A Space Odyssey is clear in both Lopatin’s concept and the visual sensibility of MyRiad; somewhere at the end point of the universe, aliens have become uber-intelligent and wonder what it might be like to be trapped inside a linear taxonomical system of understanding, namely a generational cycle loosely based on the Strauss-Howe generational theory. Lopatin has referred to this as a kind of ‘vague formalism’, a loosely satirical concept which allows his fluid, balletic performance to explode in front of eyes of a curious audience. Too often, musicians attempt to inject a lofty subject into their music, only for it to falter and ultimately drown the entire project. Nobody wants to feel as if they’re being lectured, or be made to feel as if they’re having to play catch up with a convoluted idea. Herein lies the genius of Lopatin’s idea; it can be obsessed over or it can just as easily be ignored. As a listener you can choose to flesh the concept out in your mind, or put it to one side and focus on the music alone. The fact Lopatin ironises the concept to some extent only increases the potential for different interpretations.

Once Lopatin and his collaborators take to the stage, the rapturous crowd are treated to four ‘epochs’ of music presenting the four cycles of the generational theory. These tracks are all built out of the recent Age Of record, and the most impressive feat is how they have been reworked for a live ensemble. The prevalence of that midi harpsichord on Age Of comes alive through Kelly Moran’s key work, accompanied by Eli Keszler’s textured percussion. The decision to have an acoustic kit as part of the ensemble elevates an already very kinetic set of tracks. Moran’s harpsichord sound coupled with Keszler’s use of wood and metal surfaces evoke John Cage’s prepared piano pieces, all shaped by Lopatin’s dramatic electronics which delight and terrify in equal measure.

As with all of the Oneohtrix Point Never projects, beauty and ugliness butt heads. This is the contrast Lopatin likes to present to his listener, and in tonight's deftly crafted show, the dramatic intensity of these elements are increased tenfold. Lush orchestrations of digital and the human voice on “Station” resonate through the hall, wrangling with the brutal onslaughts of power electronics and noise created by keys and foley trigger artist Aaron David Ross. Tracks like “RayCats” and “Black Snow” envelop the audience wholly, the gorgeous tones and textures sweeping through the venue.

If this level of aural assault was not enough to take in, Lopatin’s visuals throughout MyRiad make for an overwhelming spectacle; the screens present some genuinely harrowing images, one of which can only be described as a digital illustration of a skinned dog with its tongue lolling out of its head. At one point, dancers filter in through the back of the hall and make their way to the stage. They are dressed in red leotards, stetsons and facemasks, evoking some kind of dystopian Dallas. One of the final visuals of the performance is the most obvious; a skull with a videotape wedged into its mouth, held in place with chains. A number of people in the crowd chuckle; in a show with such obtuse imagery and loose conceptual ideas, this feels particularly satirical in its blatancy. The fact that many are left wondering whether it actually was or not is testament to the brilliance of Lopatin and his imposing concertscape, an arresting and daringly original performance which will be etched into the minds of the audience for a long time.