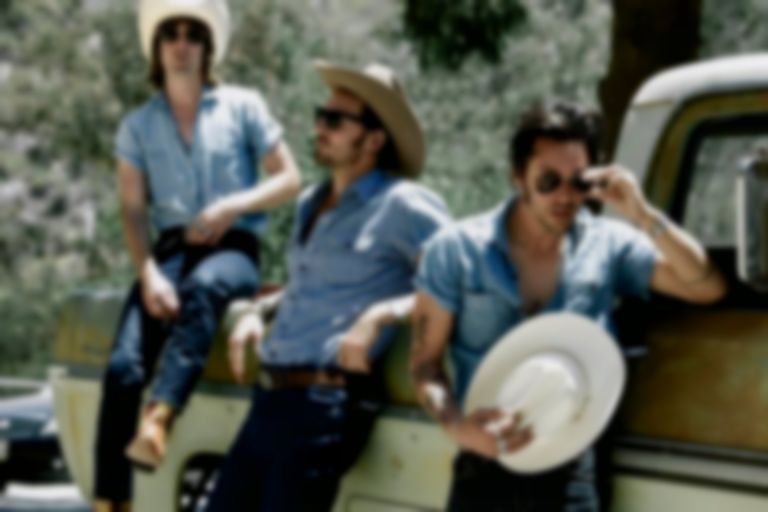 The amount of spare tickets floating around in the bar beforehand suggested that a few had fallen along the way. I’d lost a best friend and a wife to the weekend, too “countried out” to face another night at Omeara watching a band who they’d already seen 24 hours earlier at the O2 as part of the sixth annual Country 2 Country festival. But, this wasn’t the same band that they’d seen play an arena show to 14,000 people the day before. This was Midland, stripped of the arena lights and the Nudie suits, squeezed onto a tiny sweaty stage, drunken and rowdy and everything anyone ever hoped Midland could be when they first appeared eighteen months ago. And for the next two hours everyone in there forgot it was a Monday night and that it was raining outside. After all, it’s like singer Mark Wystrach says, “every night is a Saturday night when you’re in the band Midland”.

In the last few years there’s been a distinct shift in country music, away from the frat party posturing and backwards baseball cap wearing beery chauvinism of Bro-Country towards a new kind of male troubadour – still traditionally masculine, but more sensitive, politically inclusive and thoughtful – throwing back to the stars of the late seventies and early eighties; Midland are drawing from George Strait and Gary Stewart, Smokey And The Bandit and the Urban Cowboy soundtrack, dressed like East London hipsters in their felt Stetsons and Fort Lonesome suits. Make no mistake about it, Midland are country traditionalists. Just like Margo Price and Sturgill Simpson are. Just like the rest of the new wave of neo-traditionalist country artists like Cale Tyson, Nikki Lane, Andrew Combs, Tyler Childers, Colter Wall and Sam Outlaw are. It’s just that a country audience that clamours for “authenticity” is suspicious of Midland because they’re backed by Scott Borchetta’s Big Machine and they used to be underwear models and direct videos for Bruno Mars. Music row mainstays Shane McAnally and Josh Osbourne have co-writes with the band on nine of the thirteen songs on their debut album and this makes people suspicious of them; their rise to the top has been too fast, the climb not steep enough, their dues not sufficiently paid. But country music has been playing with and parodying the idea of authenticity since Jimmie Rodgers jumped off the railroad and none of this makes Midland any less worthy. Tonight at The Omeara they proved that they can more than mix it up amongst the sweat and the sawdust with all the Mikes and the Moonpies of this world. What makes Midland different, and what probably annoys the country purists more than anything, is that they immediately seem to be able to “scale up” to the stadiums and arenas, without losing any of the barroom intimacy of the smaller shows.

Tonight they peppered their one album set with covers of Bob Seger and John Cougar, Tom Petty’s "American Girl" and Mary Jane’s "Last Dance", Springsteen’s "Tougher Than The Rest" and an a cappella version of Alabama’s "Dixieland Delight", as well as a gloriously sloppy version of Bob Dylan and The Band’s "I Shall Be Released" with bassist Cameron Duddy switching to drums. The last night of a European tour that had seen them selling out shows in less than a minute was always going to be a boozy celebratory affair and as the last few chords of set closer "Turn The Page" rang out, Wystrach stumbled through the crowd to the bar at the back of the venue to do shots with the audience, punching the air and singing along as the walkout DJ played "Sweet Caroline". Which, thinking about it, kind of seems like the way every band should end a show really.

After seeing this, I genuinely don’t know if anything can stand in the way of Midland anymore. They have all the ingredients to be absolutely huge in a way that country groups struggle to be these days. With their combination of East Nashville hipster chic, Tom Selleck level hotness, Taylor Swift’s management and some of the greatest songwriters working in country music today, Midland could be genuinely massive. Like Dixie Chicks huge. Shania huge. Maybe even Garth Brooks huge! This could well be the greatest country show on earth, and I wasn’t even drunk.