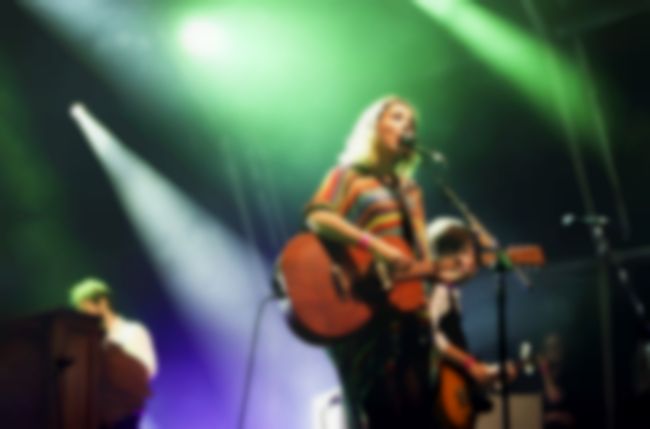 Some commentators have tried to portray Of Monsters And Men as a Icelandic version of Mumford and Sons. This, to my mind, is slightly unfair, as it’s actually possible to distinguish one OMAM song from another. Yet there’s definitely something in the sextet’s DNA that recalls the wholesome liveliness, that calculated but effective elicitation to clap your hands, sway your arms, holler and dance, that has propelled Mumford into the stratosphere (not literally, alas).


They’re certainly not shy about evoking their high-calibre influences. Their set opener, involving a slow build-up of sound whilst silhouetted behind a white sheet, brings to mind Takk-era Sigur Rós. Their energetic yelps and shouts of “hey!” recall early Arcade Fire, before the dourness and Springsteen-lust kicked in. Their thoroughly uplifting, good-time folkishness is so much like Edward Sharpe and the Magnetic Zeroes that sometimes I forget what band I’m watching.

But if innovation is in short supply, tunes certainly aren’t. Even the most embittered cynic would find it difficult to deny the charm of the accordion-heavy shanty ‘King and Lionheart,’ or the wonderful ‘Mountain of Sound’. They’ve got a nice line in sardonic humour (“this song wasn’t on the album because, well, it wasn’t as good as the others”), some excellent drumming, and of course any band with a confetti cannon can’t be all bad.

Yet there’s a lack of spontaneity that prevents them from being a truly essential live act. Their arrangements adhere too strongly to the template of the album; their performance too polished and lacking in genuine drama. Their Europe-wide hit ‘Little Talks’ is bolstered by some great trumpet flourishes, but moments like that are rare and far between. It’s a decent, good-natured performance, and far from a disappointment, but with their kind of talent one can’t help but think they could, and should be, even better.