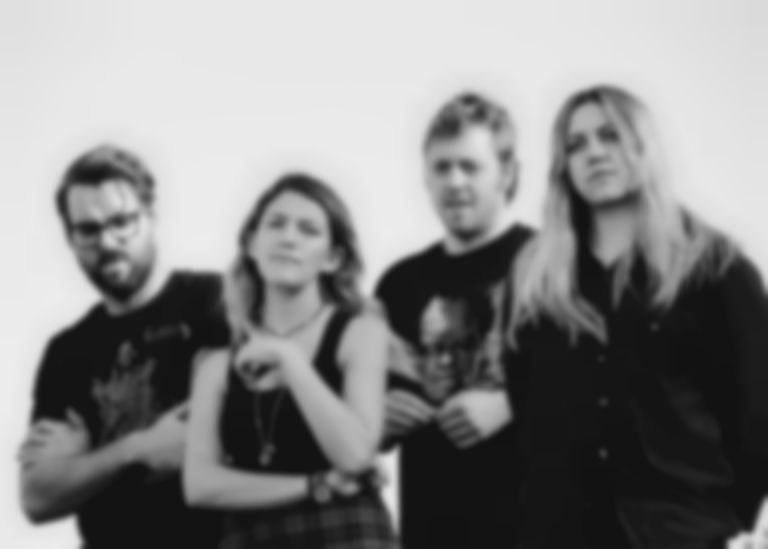 Well, what a fucking shame. Less than forty minutes after taking the stage at Dalston sweatbox The Victoria, Montreal shoegaze quartet No Joy are gone, nary a word said to the crowd and a calamitous set left wheezing in their wake. In fairness, there isn’t much point continuing: a combination of blown amps, buried vocals and sub-par performances all round have long since condemned tonight’s performance as one to forget.

Trouble is brewing right from the start, with the foursome around 20 minutes late owing to technical hiccups. The decision to position bassist Lauren Lloyd front-and-centre and shunt singer and guitarist Jasmine White-Gluz over to the right of the stage and shrouded in darkness is also less than auspicious, as though she’d rather be somewhere else entirely. As it turns out, she probably does: roughly half-way through proceedings she loses the sound of her vocals.

It doesn’t especially matter of course; nobody can really hear her anyway. “We need an amp!” drummer Garland Hastings bellows aggressively, in what will be literally the only exchange of words between the Mexican Summer signees and a patient but increasingly vexed crowd. It’s hard to tell whether the four are in such rotten spirits because of the sound issues or whether they’re just fed-up coming to the end of their European tour. Either way it’s contagious and save for a few isolated whoops of encouragement, the people on the floor are almost as irritated as the people up on stage.

Disappointments abound. Ordinarily, "I Am An Eye Machine" from the group’s latest full-length More Faithful is a towering monolith; layer upon layer of twisted sheets of guitar squall soaring into the clouds and beyond. Here, it’s almost an embarrassment, meekly petering out through what should instead be a deafening crescendo.

Some tracks fare slightly better. "E", the opener for 2013 album Wait To Pleasure, closes the set and almost delivers the scale of its recorded incarnation, pummelling everyone's chests with a five-minute guitar feedback coda that can’t help but instil wonder as to what might have been. Slower, slightly less cacophonous numbers like "Bolas" also allow people to actually hear White-Gluz for a change, too.

None of which really serves to redeem what is a pretty abject showing, unfortunately. It would be unfair to be totally critical of the quartet given the grave sound issues they’re obviously faced with here. On the other hand though, a little bit less petulance and a bit more engagement with the paying punters would surely go a long way. If your band’s frustrated during a bad show, just imagine how the crowd feel.