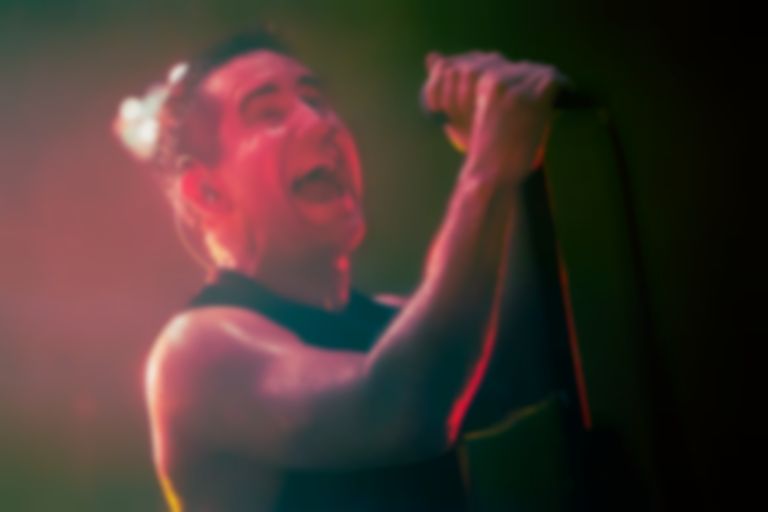 “They’re having trouble shifting tickets,” a promoter friend told me two weeks before this show, and sure enough there’s something of a desperation in the days preceding: one agency is selling at two-for-one, another has seats in the upper-tiers priced at just £2.99, and a sad black curtain drapes out at least five blocks at the back of the arena. It’s an incredible scenario, that a band with this status could struggle to fill a room - a band with tens of millions of record sales, multiple Grammy awards, festival headline slots the world over, one of the most acclaimed live shows of the last decade and an Oscar-winning frontman that Time Magazine once proclaimed one of the 25 most influential Americans, alongside George Soros, John McCain and Harvey Weinstein. Safe to say Nine Inch Nails are pretty damn far from a niche concern.

But then this tour was always going to be a tricky sell - didn’t we only just wave goodbye, across six months of farewell shows in 2009 that culminated in the selling-off of all the band’s equipment, right down to the cables and the memory sticks? It’s hard not to feel a little cheated: we’d done our grieving, dammit. We’d moved on, found new bands. A five year gap and an underwhelming new album doesn’t quite justify dragging us out to the O2 Arena again.

Ah, the O2. It’s hard to conceive of a less appropriate environment for Reznor’s misanthropic binds, his grey-black palette of machine noise and wrenching introspection. All week they’ve been emailing, exhorting me to ‘strike it lucky at Brooklyn Bowl’, to ‘climb over our roof with Up At The O2’ and to book my valet parking, as though these are the natural accompaniments to songs about self-harm and suicide, the essential pre-gig rituals. Exiting the Jubilee line the band’s faces loom down from towers of rotating LCDs, just the first layer of branding on a peninsula dedicated to branding: our tickets alone contain no fewer than ten company sponsors, a marvelous irony for a band that’s been so very vocal in their corporate criticism, in their disdain for rampant consumption.

Valet parking. VIP hospitality suites. £15 burger bars. This is where art goes to die, fused irreversibly to the profit imperative. Five minutes before showtime and Coca-Cola logos ring the entire venue and the rows around get comfy in their stadium seats, hemmed in by paper cups and food trays. Thousands check in to Four Square and Instagram.

This isn’t NIN’s fault, of course, but it’s incredibly sad to see their co-option into the entertainment complex, their music becoming mere television, mere accompaniment to getting drunk and getting fat in a padded chair. The people on my row cease their conversation only twice, for “Closer” and for “Hurt”, and the girl next to me looks up from her phone only fleetingly. The traffic on the stairwells never slows.

NIN are wasted here, on this venue that’s primed for maximum distraction, for perpetual detachment from whatever’s on stage. But theirs is a fierce set nevertheless, a combative set, pocked with stunning moments across a setlist drawn from considerably deeper within the catalogues than might be expected for an arena show: it might be twenty years since we headed down the spiral but the rage here still (largely) convinces, the volume excoriating and the musicianship superb. Stripped back to a four-piece the band move effortlessly from the chorus-driven industrial pop of “Copy Of A” and “Came Back Haunted” to the artillery barrage of “March Of The Pigs” and the minimalism of “Find My Way”, via the moshpit of “Gave Up” and the warehouse rave of “Disappointed”. “Closer” and “Head Like A Hole” get the biggest cheers, of course - heck, some people even stand up from their chairs - but “Eraser” and “The Becoming” provide the strongest moments, massive and uncompromising and still hugely innovative in structure and form.

Rob Sheridan’s production remains as stunning as ever, a meticulous balance of low-key understatement through to end-times assault, from shadowplay and retro graphics through to the full-on dissemblance of “The Great Destroyer”, the screen depicting the UK’s flag glitched and enmeshed with dystopian imagery and fragments of news headlines. Few stage shows have this much ambition, this much effort to imbue every sonic moment with an appropriate visual counterpart.

If a nagging remains it’s with Reznor himself: 49 years old and long sober, he’s a very different person to the guy that wrote most of these songs. Sure, he delivers them with conviction, that scream still potent, but the issue is whether he should be: the emotion of tracks like “The Wretched” and “Piggy” was so raw on record it seems wrong that they should be reprised each night, channeled back like karaoke for a crowd to sing along to. The worst is when “Hurt” - still awesomely, utterly wrenching after two decades - has half the arena clapping along as though it’s some fucking pantomime number, some mere primetime fodder instead of one of the saddest, most aching works ever recorded. The terror in watching Reznor move through the staples of his performance - flinging the mike-stand to the floor, balling his fists to his face - is wondering at what point this all becomes ersatz, all the power in this music wrung dry and the emotion as vacuum-packed and cynical as a Vegas residency. “I am just a copy of a copy of a copy”, Reznor sings early in this set. “Everything I say has come before.”

This is an amazing show, nostalgic but still staggeringly vital, from a band that remain a long way ahead of their peers even as they’re treading material from last century. But as great as it is to hear these songs again that nagging voice never quite recedes: that it would perhaps have been better for them to have been allowed to rest. That this was fun, sure, but that Reznor probably made the right decision five years ago, and coming back can only diminish him.