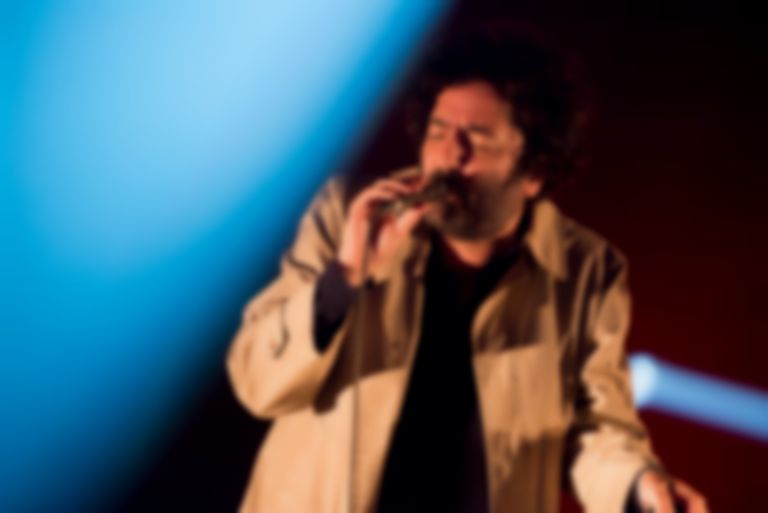 Destroyer began this tour in support of their most recent album Poison Season in September last year. Now, ten months later and having travelled around the Western world, the album has a wonderful, lived-in feel, with the songs evolving in to rollicking jams and frontman Dan Bejar feeling comfortable enough in them to perform with more flamboyance than we've ever seen him display.

Tonight's show at London's Oval Space (15 June) began promptly at 9.15 with "Bangkok" flowing elegantly from the stage as broad daylight poured in from the windows. The darkness of this most perfunctory of rooms and natural beauty of what was just outside gave the gig's beginning a peculiar feel, amplified by the introduction of "Forces From Above", a slinky but masterfully unnerving song described by Bejar as being "about an English sunset". One got the impression he'd have preferred all of us to be enjoying the rendition outside on the balcony instead.

It wasn't until a silky smooth "Chinatown" that Bejar admitted he was "getting in to this aircraft hanger", and the feeling of the band clicking in to a groove was palpable. There isn't a particularly flattering way of dancing to Destroyer - it seems to turn everyone in to Dads at weddings - but yet they make it impossible not to sway along with an inane grin, getting lost in often very sarcastic music in a very sincere way. If there's a joke here somewhere, and it's on me, I don't care.

Poison Season, which made up around half the set, still breathes despite a long tour that could have sucked all the life out of it, the songs now providing this most recent version of Destroyer an opportunity to do what they do best, which is jam like absolute bastards. It's these looser sections, rather than the songs as they stand on record, which feel most invigorating; they point to a band who want what's next, rather than what they've just done.

The overriding feeling was one of the last day of school, as if Bejar, rather than having us study his new record, allowed us to watch our favourite videos instead ("European Oils" was full on, demob bliss). A particularly carefree "Painter In Your Pocket" in the encore was so loose it almost fell apart, carried through by the sheer swagger with which it was delivered. A band somewhat out of time and revelling in it, none of what they're up to is at all fashionable - there are flutes, for fucks sake - but there are few groups I'd rather watch indulge a good old fashioned whim than this lot. A case in point, "Bay of Pigs" - all ten minutes of which closed the main set - could have gone on forever for all I cared.