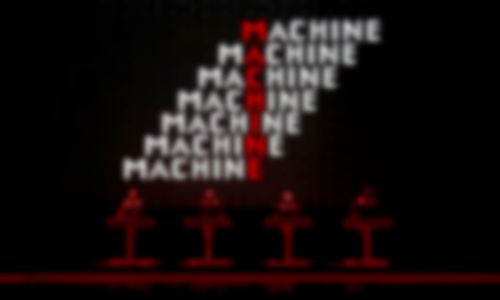 With every album in their vast post-1973 repertoire garnering the title of “modern masterpiece” at some point throughout the decades that lie behind us, it seems more than fitting that Kraftwerk should appear in the company of their contemporaries this evening. And not just for this evening of course, but for eight dazzling, 3D visual-filled nights at the Tate Modern designed to explore their back catalogue one album at a time from 1974′s Autobahn to 2003′s Tour De France.

Tonight though, is all about 1978′s The Man-Machine (or Die Mensch-Maschine if we wanted to be true to their native tongue), widely regarded as the their most accessible record. With specially designed glasses placed firmly over eyes, the glitches of its classic title track begin to ring out, the word “machine” cut in blazing white letters against a black backdrop in front of which four stark German figures stand at their posts. The groups’ seventh studio album, it epitomises everything Ralf Hütter and the now departed Florian Schneider envisioned for their project – a marriage of music and software.

The Man-Machine is a mark of their futuristic vision, one which was never allowed to wallow nostalgia but always pushed things forward, with relentless, often jarring momentum. They were, and still are, pioneers in the truest sense, and as they move on to ‘Spacelab’ and ‘Metropolis’ it’s already plainly obvious that the artistic world has finally caught up with them, giving their music the the visual treatment it deserves, an element that had always been so intrinsic to them personally.

There is of course ironically something wonderfully old fashioned about their minimalist, art deco inclined graphics, but then again they match the simple, almost automated lyrics of songs like ‘The Model’ perfectly: “She’s a model and she’s looking good/I’d like to take her home that’s understood.” It is of course during the beautiful, soaring delicacies of ‘Neon Lights’ that you can feel the audience loose themselves entirely to the bewitching light show.

Curtailing The Man-Machine portion of tonight’s 2 hour long proceedings with arguably their most iconographic number ‘The Robots’, Kraftwerk remind everyone that they don’t just look amazing, but that they sound amazing too. The cyborg like vocals and fluttering, instantly recognisable synth hook punctuating a near indecipherable number of sonic levels.

‘Autobahn’ follows in hazy succession, rivalling ‘The Robots’ for iconography as its VW Beetle projection zooms around the Turbine Hall, eventually making its way towards Dusseldorf. Industrial yet warm, ‘Autobahn’s distorted, slow mid-track tempo makes for the most unlikely of sing-a-longs. It’s not long before the respite is over though and ‘Radioactivity’ takes centre stage, its oppressive core reverberating around the great space. The sound is crystal clear and disorientating in equal measure, the high pitched synths feel like coming up for a breath of fresh air amongst the dirty bass swells. And even though The Man-Machine is clearly main agenda we’re also treated to ‘Trans-Europe Express’, ‘Computer World’, both ‘Tour De France’ songs and ‘Techno Pop’ before Electric Cafe (also known as Techno Pop) number ‘Musique Non Stop’ brings the set to its logical conclusion.

And whilst the musical extravaganza that was Kraftwerk – The Catalogue 1 2 3 4 5 6 7 8 has now come to a close, this isn’t the end for Kraftwerk. They have more milage left in them than anyone because over forty years later they still sound like the future.