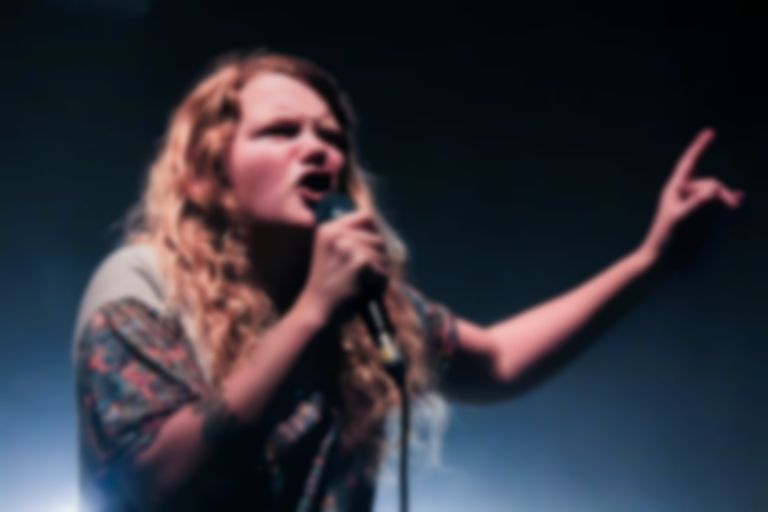 "This is a dream, a fucking dream" Kate Tempest repeats, at tonight's sold out gig at Village Underground. Elsewhere that might seem a tired cliché, but Kate's ecstasy is vivid and palpable. She beams, her chest puffing in each interlude as she breathes it all in. Wide-eyed, she scans the crowd in seeming disbelief, as if she wants to capture each fragment and consign it safely to her memory.

Tonight is very much deserved. Every whoop and every cheer finally the recognition her talent demands. Fresh from a nomination for a Mercury Award, for which she quickly became bookies favourites but lost to outsider trio Young Fathers, she is riding the crest of its publicity wave. It’s about time her meaningful melodic hip hop went mainstream.

"Marshall Law" is the opener, the confrontational first track of her concept album Everybody Down. She is rampant, delivering lyrically clever rap with precision and poignancy while emanating her homespun warmth. Don't get me wrong, the girl has attitude and you wouldn't wanna cross her. Scathing, she scatters her patter from drug-fuelled parties to reality TV, casting caustic critique on what's wrong with the world via the stories of her London dwelling characters.

Vociferous with ferocious velocity, she pounds through her poetry, twisting her tongue at startling speed. From observation and pontification to contemplation and defamation, her words are a stream of consciousness that express the angst of a generation in London's hipster rat-race. They manage to rise above the everyday laments of the woe-ridden youth; they are sculpted, eloquent and dulcet.

She skips and stomps and skulks around the stage, embracing her four piece band like old friends as they drive a zealous energy beneath her vocal performance. Then at times they stand silent, leaving Kate a capella, tuneful and mesmerising. She rapidly rattles through rhymes, at times, her on beat street lingo so nimble we are left astounded. With a whimsical smile and cock of her head she remarks: "I went fast, that was all that that I did there".

A graduate of poetry, her work is concisely crafted, a synergy of elaborate alliteration and woven modern fables. She tells us that this, her first headline tour, "shows that you don't have to sexy and pretty and singing someone else's lyrics to be a female on stage". Its greeted with a cheer, which feels a little awkward, like we're commending her self-declared unsightliness. With golden curly locks and bright blue eyes, she's hardly a beast.

Yet in jeans and a t-shirt, she hasn't conformed to the beauty parade demands of commercialism. Her face contorts as she performs and the emotion of each word is eked out on her face while her hands scratch her chest or clench in angry fists. On her leg is stuck her Access All Areas pass, worn like a badge of honour. A sly joke perhaps, or maybe she had genuine concerns that she might not be recognised as she wandered onto the stage.

For "Heist" the crowd are whipped into a frenzy by a hectic drumbeat and dramatic keys, and Kate thrashing in a strobe light. She spits, "You've got to do what you've got to do, until you get it done" with a belligerent swagger. "Circles' is the pop end of her spectrum, with its singalong chorus. The crowd join in with their arms lassoing in the air, and are greeted by a swell of pride on Kate's face that sees her fierce storytelling armour dissolve in delight.

This is a girl who has spent 12 years pursuing just this, her creative dream. "I have busked everywhere, at the bins outside festivals, I have worked my ass off." Despite her astute social scrutiny, sardonic wit and lyrical dexterity, it has evidently been a long hard slog. Even now, amid the much awaited public adulation, she still worries for how she will be perceived and in a recent interview voiced fears that she will sound "like a wanker".

You're not a wanker, Kate, you're a legend. A 28-year old who has not just followed her heart but masterminded it and self-driven her dream to success. You've worked for this, take it, it's yours.