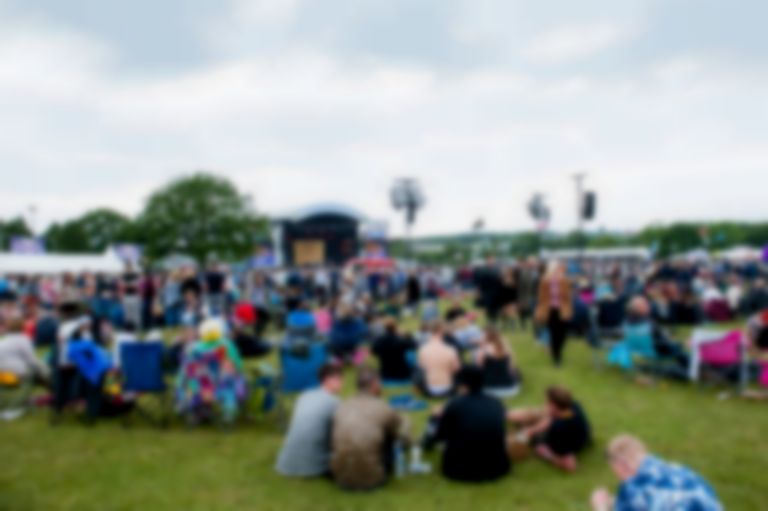 Isle Of Wight Festival, although organiser John Giddings probably won't admit it, has long had the reputation of something rather commercial. For years it's been struggling to find its niche; Is it a hippy shangri-la with throwbacks to its '70s roots? Is it a Download opponent? Do they want to champion new music or old hits? Is it basically V Festival?

It may have taken over a decade of tinkering with the formula but IOW 2015 felt like Giddings has found what he'd been searching for and managed to reclaim the joy of its historical forebear in the process. Adding in plenty of side bars, tents and shows, some plucked from other successful galas and some from his own mind, he's managed to create a four-dayer with genuine variety and pop nous. Nitrous canisters were few and far between, technicolor spews banished, and lager louts of yore seemed all but consigned to the annals of 2008. Families are in abundance, kids frolic, babies nap – we didn't feel we had to be on our guard anymore.

If it seems that Giddings is on a roll – an upward swing – that's nothing compared to his headliners, all striving to prove their worth in one way or another. The Black Keys return from injury after many tour cancellations; The Prodigy roadtest new material and challenge naysayers; Blur offer a mixed bag for all comers – hardcore fans and casual hits-lovers alike; Fleetwood Mac defy the odds to offload an experience that leaves jaws so agape the crowds are tripping over their own tongues. 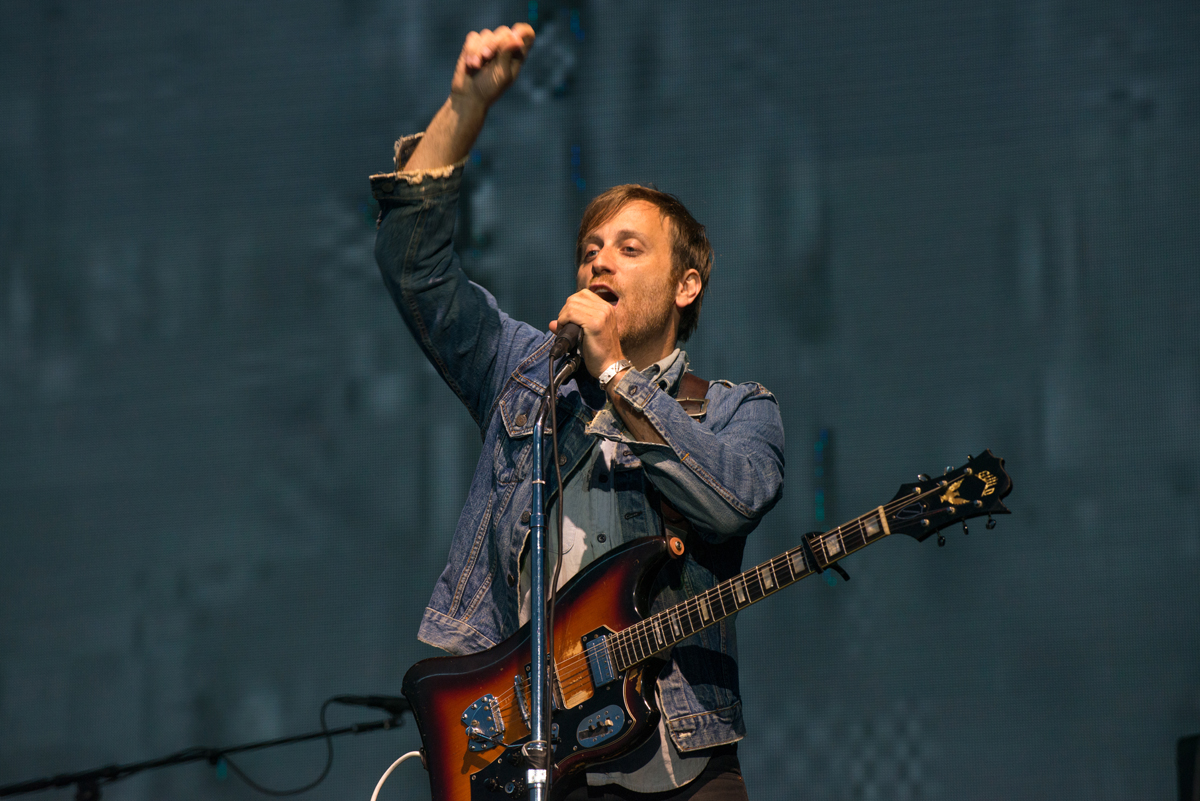 Friday co-toppers The Black Keys - reassembled after the spectacular dislocation of drummer Patrick Carney's shoulder and their subsequent mass cancellation of tour dates - arrive in a downpour. It's reported that a full month's worth of rain fell in two hours, and those deciding to depart could be forgiven as the ground turned into a sludgy brown vacuum, all-too-willing to suck the wellies right off your feet.

But they soldier on, performing a set mostly comprising El Camino and Brothers numbers, much to the elation of the sodden before them. Carney is apparently over his hiccup, and The Black Keys provide a tantalising showcase of what we can surely expect at the top of festival bills worldwide in the next few years. They've been out for a few months, but no recuperation’s needed for them to refind form. On with the show, it seems.

Dance freaks The Prodigy, the other headliner on the proper opening night, are no strangers to these shores (they've headlined twice before: 2007 and 2009).  Recent album The Day Is My Enemy, their first since 2009, is no The Fat Of The Land, granted, but each track offers enough rave-rock gumption to gee up those still dripping from the downpour, and “Ibiza”, featuring Jason Williamson of Sleaford Mods, gets its live premiere too. When the hits – “Breathe”, “Firestarter”, y'know, the usual suspects – get an airing, people go bananas. The reaction to the newer material is more muted, but not gone, and it proves than anything with energy, strong beats and heavy bass will get people moving.

Relevant in 2015 or not, The Prodigy are crowd pleasers, and while their own shows and albums might not be the hellraising offerings they once were, they still have plenty to offer high on a festival bill. You want a band to galvanise thousands of wet party-goers? These guys'll do the trick for years to come. 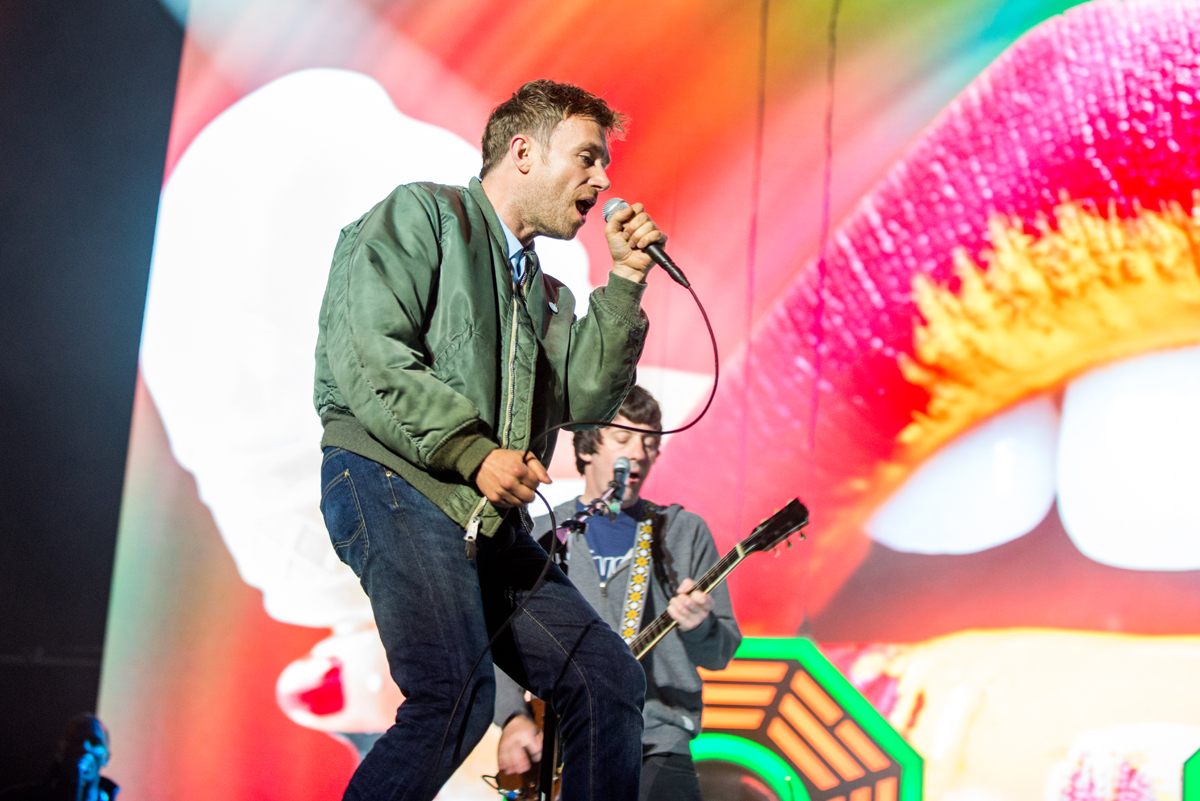 Saturday night is headlined by Blur – the second headliner to, by all accounts, pick Isle Of Wight over Glastonbury – a band who's catalogue of hits is thicker than molasses and sticks with you longer. They play most of them, bar “Country House”, but instead of sticking to well-known material for the most part, Blur do a right-angle turn and chug through diehard fan favourites like “Trimm Trabb”, “Trouble In The Message Centre” and “Out Of Time”.

And, of course, many numbers from The Magic Whip, the band's first record as a full four-piece since 1999's 13, got a showing. The LP has catapulted Damon Albarn, Graham Coxon, Alex James and Dave Rowntree, back into the spotlight of the UK, and though the band have undergone many personality shifts, new cuts like “Ong Ong”, “Go Out” and “Lonesome Street” are wonderful additions.

The band are backed by brass, strings and a choir, and many of Blur's tracks are more lugubrious than the baying masses who want “Parklife” eight times in a row might have expected. Despite this, and despite the distinct lack of Albarn's laddy cheekiness, he summons immense reactions – he's still a born frontman through and through. Dipping to the barrier, held back by security that looks mighty, mighty terrified, the front rows are clearly enamoured, with outstretched arms begging to touch Albarn.

During “Tender”, an epic, rousing ode with one of Blur's most unsung singalong moments, Albarn kisses Coxon and James on the cheeks in an overly tender (sorry) moment. He's as caught up in the emotion as he was in that famous Glasto spot, and it's heartwarming – here's a band so fraught with differing opinions and strong minds, butting heads on the regular, that still make it through, content in each other's company, at least for one, brief evening.

Only one band could top it, and unfortunately for Blur, they do.

Fleetwood Mac; ah, Fleetwood Mac – the band that less than a week prior had cancelled two shows due to unspecified 'illness'. True perhaps, though speculation was rife (Rumours, you could say) that they'd just pissed each other off (if that were true, they did a swell job of masking their interpersonal squabbles). That week became a loose kind of mini-metaphor for the last few years, maybe even decades. Basically: will they or won't they? But they did.

Oh they fucking did.

Fleetwood Mac, at the top of their game still/once more, what have you, will go down in history as one of the top Isle Of Wight Festival headliners; this was an 'I was there' moment if there ever was one.

Even minutes before Stevie Nicks, Lindsey Buckingham, Christine McVie (back for the first time since 1998), John McVie and Mick Fleetwood take to the stage, there's an air of assumption that the masses – many tens of thousands of eager revellers – that the legendary folk-rock outfit, pushing 60 years together as a band, would bail. There's a misplaced assumption that we've all been stuck up, despite the numerous statements categorically proving otherwise. It might be that precise lowering of expectations that pushed their rapturous appearance to giddy heights unassailable my many bands; the reasons for jettisoning 'heritage headliners' are many and just, but Fleetwood Mac barge back with plenty of genuine reasons for older acts to demand top billing. They've got the catalogue, the proven experience, and, crucially, the unadulterated adulation from generations of fans.

“The Chain” opens, barely audible above the wide-eyed, legless and frenetic throat-tear screaming. That barely wanes through the quintet's honed two-hour set, reeling off massive anthems like “Rhiannon”, “Dreams”, “Everywhere”, “Little Lies”, “Tusk”, “Say You Love Me”... the list goes on. Buckingham even slides in a three-song acoustic digression, to the delight of fans, but perhaps not his hand, which he shakes vigorously as if to uncramp it. “Go Your Own Way” is every bit as triumphant as you'd expect, and the closing encore of “Don't Stop”, backed by a monumental firework display, echoes out over Seaclose Park with calculated grace.

Every second is heady and addictive surely recalling the euphoria of the original festival's run. Groups join and swoon and coo and sway together; tears stain sozzled cheekbones, washing away neon paint; Fleetwood Mac conjure a kind of happiness that only films capture. It sounds cheesy as hell, but in those moments, it feels like all is right. It's pure escapism. Magic.

Following their encore they whip away, thieves in the sulphur-stank night, ne'er to be glimpsed again on these rocks (probably). Then, Mick Fleetwood returns to the stage to deliver an impassioned, hat-wringing speech. He's a tad nervous, it seems, talking to a crowd of what's gotta be roughly 50,000, but succinctly speaks of peace, ending on the booming line: "Take care of yourselves, and more importantly take care of each other; we love you very much!"

The Isle Of Wight Festival in recent years has rarely sold to its capacity of almost 100,000 – not even grazing the original run's draw of 700,000, which was roughly seven times bigger than the population at the time – but if John Giddings continues to be a canny ear and a cannier mind, then it's not a stretch to imagine a Golden Age for the festival will soon return.

Check out our live galleries of days one, two, three and four by Gaëlle Beri..