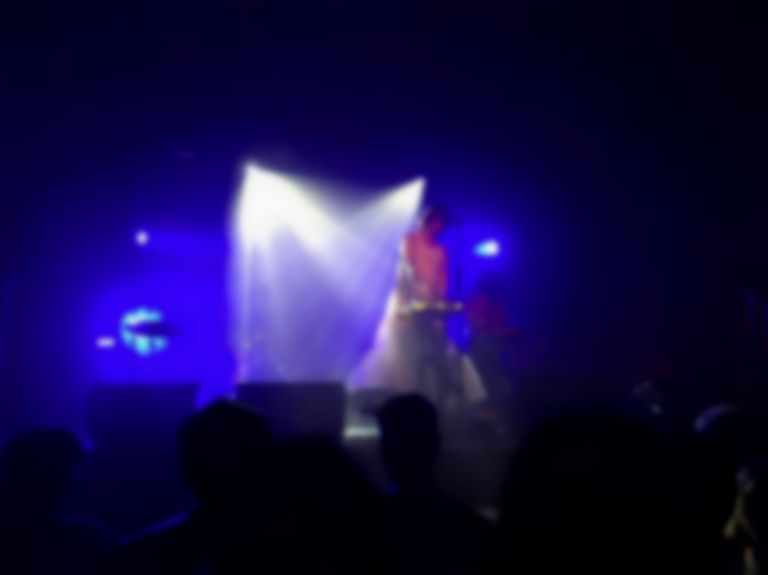 Accoutred in bridal dress, Angus Andrew took to the stage at London’s Heaven to join the congregation in celebrating the recent musical union between himself and Liars’ two new touring members, Blaze and Reid Bateh. Crucially, this union has provoked Liars to return to their true nature - delightfully unhinged and relentlessly raucous.

Employing new touring members to any group can have varying results. Liars themselves have experienced the negative effects of numerical expansion. In 2010, they fell foul to a rather sedate performance at Shepherd’s Bush Empire in support of Sisterworld, when performing as a five-piece. Ironically, on that evening, Liars’ disquieting, post-punk sound had its greatest impact when they reverted back to the beloved three-piece (of Andrew, Aaron Hemphill and Julian Gross) to perform the encore.

With TFCF’s disorientating use of naturalistic samples and electronic sounds, Andrew may have chosen to present TFCF alone with the use of samplers and electronic instrumentation. Instead, he has taken a risk in replacing the likes of Gross and Hemphill with the Bateh brothers (members of the Brooklyn trio, Bambara). This risk, on evidence of their performance at Heaven, has proven to be fruitful, revitalising not only the Liars project within the live setting but also Andrew himself as a frontman.

Separated from the electronic equipment necessary to bring much of Mess and WIXIW to life, Andrew appeared rejuvenated, relishing the opportunity to confront and connect with the adoring crowd. Prowling the stage with his imperious physical presence, Andrew resembled a possessed Shaman, manically gyrating and gesticulating to the agitated beats. His energy acted as an infectious catalyst for a crowd, which initially needed appropriate arousal.

Be it potentially the concert’s early start or a post-prandial slump, there was a palpable sluggishness to the set’s opening section. Unfortunately, TFCF’s “Emblems of Another Story” and Sisterworld’s violent “Scarecrows On A Killer Slant” fell somewhat flat as the audience were yet to be fully awoken from their early evening slumber.

Nevertheless, on account of Andrew’s aforementioned energy, Blaze Bateh’s explosive drumming and a set list, which predominantly focussed on the heavier elements of Liars’ back catalogue, Heaven’s front rows were subsequently transformed into a sea of flailing limbs. Specifically, an incendiary mid-set trio of “Cred Woes”, “Mr. You’re On Fire Mr.” and set-highlight “Mess On A Mission” induced pandemonium.

In fact, there was little sonic or emotive respite to be found throughout Liars’ seventeen-track set. The deranged pop of “Houseclouds” from Liars’ eponymous record proved to be one of the only moments of relief within a set characterised by the stomping “Cred Woes”; the brutally crushing “Plaster Casts of Everything”; and the feral “Broken Witch”.

Furthermore, the paranoia of “The Overachievers”, suitably followed the anxiety-heightening “It Fit When I Was A Kid”, which featured apocalyptic drums and funereal organs. Even in the set’s quieter moments, there was still a highly hypnotic and sorrowful quality to be found within the drones of “Drum Gets a Glimpse” and the looping “Can’t Hear Well”.

Although arguably short on material from TFCF, it was a sheer delight to witness Liars exuberantly delve into their chameleonic back catalogue. In this new live incarnation, Liars have been given a new lease of life, and at Heaven, Angus Andrew - in tandem with the Bateh Brothers - reaffirmed Liars’ status as a truly vital live band. May this union be long and joyous.