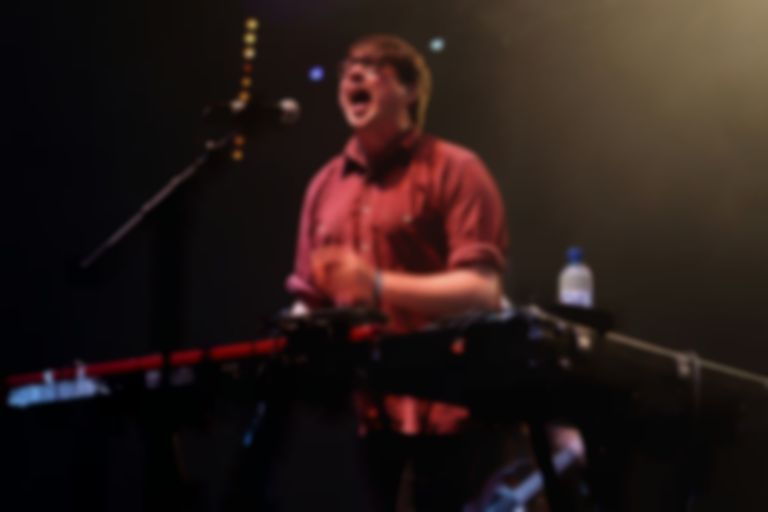 Few bands make every second of their onstage lifespan feel so vital as Hookworms, and little prepares you for their live performance unless you've been through it before. Last time for me was pure fortune: stumbling across an isolated festival tent whilst trying to avoid Rudimental introduced me to a hypnotising, terrifying intensity I've not forgotten since. Around 40 of us were blown away that night; the band only pausing for MJ to politely ask everyone to get closer. Everyone did – but not without a second or two of hesitation. I don’t really remember anyone clapping, or individual songs, just sound from a tiny yellow tent that you would never imagine possible.

Several years on, a worthy sell-out at Oval Space makes for the enticing prospect of hearing that sound again in a much bigger space. Supported on this tour by Virginia Wing, the four piece did a stellar job of warming up the crowd with their own pop-tinted post-punk, a reverberating and impressively versatile vocal present throughout most of their warmly-received set.

But once Hookworms started and slowly accelerated into full force, their sound hits like a truck and I immediately forget about taking notes or the drink in my hand or doing anything other than let my ears be melted by texture. Playing mostly from late 2014's The Hum, a record which, much like the band’s performance, rarely pauses, it only takes a song and a half for the crowd to break into a kind of hipster mosh, the band seemingly indifferent about anything other than their instruments. Once onstage there's an unsurprising lack of chit-chat - on occasional downtimes there might be a flicker of MJ’s attention, but in general Hookworms seemed to barely notice the crowd. Such is the concentration, it’s MJ’s afterthought to acknowledge - looking up from gear, just a glance or a hand – which could have been to say thanks, or simply to apologise for hunched attention to a particular part of his complex setup.

It feels unfair to the rest of what is an exceptionally well-tuned band to place so much focus on the lead vocalist and knob-tweaker, but MJ's performance is impossible to ignore. Initially appearing with shirt neatly buttoned and quiet, absorbed determination, it takes only a few minutes for this control to tear itself apart. By the close a t-shirt remains, a drenched, weary tangle of hair.

The band's performance rarely breaks - if just for a shift in pace. The calmer "Off Screen" whilst bathed in the red of a usually busy visual display, proved cathartic for both band and crowd, until once again the band kicked into another attack on the venue’s foundations. But for the most part songs effortlessly blend together, an hour of music flies by with the main noticeable change being room temperature. There was no encore, nor was it particularly expected - you could tell the performance was meant as a single piece. It feels like there could be one person watching Hookworms or 10,000, it wouldn't matter. But if they keep on performances like this, it's only going to rise from here.