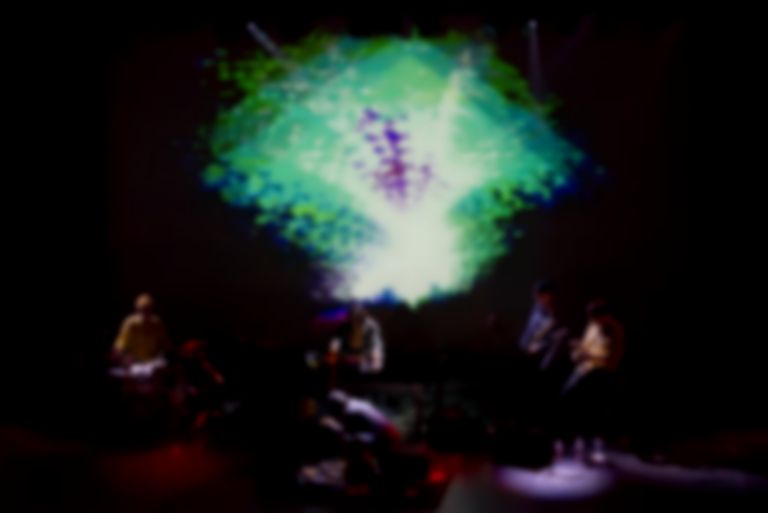 When James Holden released The Animal Spirits earlier this year, one thing became clear, and that was Holden’s towering ambition to continue to push the boundaries, both in what it means to make a dance record and how different instruments should interact with one another. Many of the ideas that were present in 2013’s The Inheritors were still in tact, but the dial had been switched up and the entanglement of inspirations further entwined in the percussive polyrhythms. Tonight’s show is the debut exhibition of that highly ambitious record, and it does not disappoint.

Taking an album that is so heavily transfixed on intricate experimentation and taking that into the live setting might seem like a hefty task, but it is one that Holden evidently takes seriously. The stage is decorated with the ribbons from the album cover, and from the minute that the opening bellows of "Incantation for Inanimate Object" begin, it becomes evident that Holden is creating more than a mere show. It’s all about the experience. It’s built to take you away from this world and into another, even if only momentarily.

Holden takes centre stage with his synths whilst his fellow musicians surround him in a wider circle, making him appear almost as a cultish ringmaster and conductor of the Animal Spirits themselves. Amongst those musicians is Rocketnumber9 drummer Tom Page, whose drumming is something to behold in itself and to which much of the energy from the evening spouts from as he drives the pieces forward or provides the perfect meditative backdrop.

The set is built around panting, heaving mega-mixes of sounds that one wouldn’t normally piece together that constantly walk on a tightrope between working perfectly and falling apart. But it’s when that level of tension is pushed that the real excitement can be found. However, those moments are rare as the each track gets stretched to the maximum, with the climax being constantly teased but rarely reached.

Take "Pass Through The Fire", for example, which feels like a mounting fever, or experiencing some kind of ritualistic trance. That effect is only heightened by the deranged lighting backdrop that flips through colours and shapes behind Holden’s shadow. It all builds and builds, becoming louder with the saxophone, oboe and synths all bouncing off of one another in excitement. Yet, amongst all of the clattering and intensity there is still the sense that something is being held back and this seems to be the theme for the evening. It is a constant tease of a set that leaves you gasping and holding out your hands for more.

It’s probably not the kind of show that is going to be for everyone, as its complexity demands a level of concentration that you need to follow and a momentarily lapse can leave you feeling lost in the drama of it all. However, it is exquisitely presented and expertly imparted. As the final melodies of "Go Gladly Into the Earth" play out, there is a real sense that everyone in the room has just experienced something special, and ultimately, otherworldly.