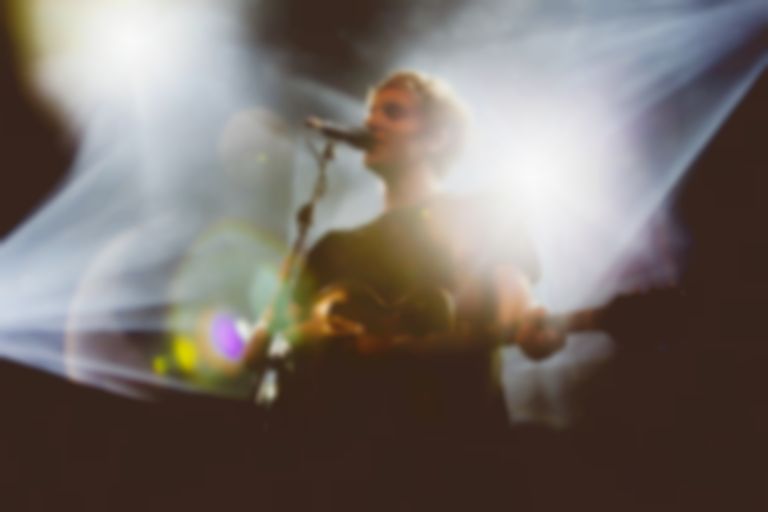 The Somerset House Summer Series gigs bring with them a bit of a strange combination of people, from music fans to what you could simply call ‘music observers’. The setting within the courtyard is truly spectacular and without a doubt makes the night feel a hundred times more special than simply seeing George Ezra play down Brixton Academy. This is positively majestic.

Originally from Hertfordshire, Ezra has certainly earned his place atop the British singer-songwriter heirarchy, having sold one million copies of his debut album Wanted On Voyage in the UK alone over the past year. He’s at the stage where headlining a night of the Somerset House Summer Series is the perfect arrangement.

Supporting Ezra was Flo Morrisey, a fellow up and coming English singer-songwriter who's just released her debut album on Glassnote in June this year. She carries off a '60s folk vibe flawlessly, and with a captivating persona. With a fairly bustling early doors audience it was difficult to fully hear her whimsical vocals, while a full band including a cellist accompanied her. Despite this, Morrissey proved herself to be an artist of many talents, jumping from keys to guitar and singing with an effortless grace. It must be said that her band were also incredible.

The moment that George Ezra walked on stage of course, the previously rather insipid audience was brought to life - although ,due to the rain, there was a ruckus occurring over umbrellas as he began to perform the extremely catchy "Cassy O" (also known as the one about everyone’s favourite watch). It was an energetic way to start off his set before diving straight into personal favourite “Stand By Your Gun”.

Blokes with guitars remain ten a penny, but Ezra's voice (his singing one, not the Hertfordshire accent) is what makes him so unique, especially live, with his deep vocals effortlessly resonating throughout the expanse of the 3,000 capacity courtyard. They shone especially brightly single "Listen To The Man", which was followed by discussions about Ian McKellan, who comically appears in the song's video.

We were gifted a lovely acoustic treat in the form of a cover of Bob Dylan’s "Girl From the North Country" before going back into his own material - albeit briefly - and picking up the pace with "Leaving It Up To You" and "Blame It On Me". Yet possibly the best part of the night occurred when Ezra dropped in a cover of Macy Gray’s "I Try", a reworking which had everyone taken aback at first but was resoundingly nailed.

Unsurprisingly "Budapest" was the biggest crowd pleaser of the night, however it wasn't to be the end to the evening. Ezra’s encore began with "Blind Man In Amsterdam" and went into one of his most impressive numbers "Did You Hear The Rain?", a euphoric song to hear live with a full band behind George pushing him on. It really did feel like a memorable night, and exactly the kind of thing that the Summer Series aims at achieving - gigs that are as impressive as their idyllic setting.