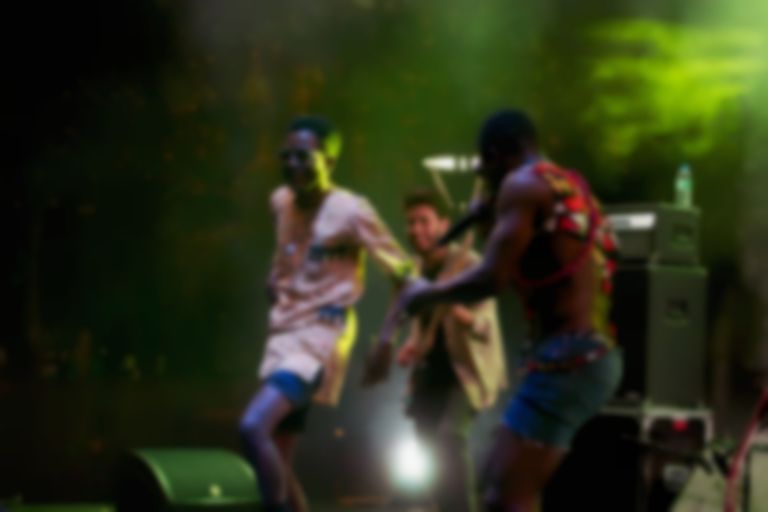 On the same weekend that David Cameron headed into Europe to renegotiate terms, and the pop world descended on Vienna for the Eurovision song contest, I headed to Clermont-Ferrand in the Auvergne region of France to the Europavox festival, now in its 10th year

The brainchild of François Missonnier, who is also responsible for Rock En Seine, the festival aims to bring together artists from around Europe in order to promote the vast array of musical talent therein. Tired of Europe being a dirty word, the mission statement is to display “Unity in Diversity”. To date the event has featured over 450 bands from 30 countries, in front of over 120,000 people. This year the festival also booked a tour for featured artists around France, with hopes of expanding across Europe at a later date.

Arriving in Clermont Ferrand late on the Friday evening, within minutes of leaving the station it became apparent that town had something about it. The home to the world’s leading Short Film Festival, and to one of the finest French record labels, Kutu Folk, the city seemed to have music and art around every corner, be it choral music drifting across from the spectacular Gothic Cathedral or the numerous car-park dance parties that seemed to be happening in every space big enough to fit a car with a sound system.

Thursday and Friday saw performances from Meshell Ndegeocello and Carl Barat and The Jackals, but the festival proper got underway on Saturday. Located just off Rue Serge Gainsbourg (of course), the festival site contained 4 venues all within walking distance, allowing the most eager of festival goings to maximise their gig going activities. Set amongst the trees a free open air stage also played home to the Kids festival. Les Frères Casquette’s colourful cartoon hip-hop got things off to a not-so-serious start with costume changes, synchronised dance moves and plenty of smiles from young and old alike.

The 4000 capacity Polydome played host to the larger acts during the festival, the dedicated lining up at the front with banners for the likes of Placebo or Selah Sue. We arrive towards the end of Denai Moore’s well received set. Shortly after Moore’s set finishes the stage gains a long white fringe, and fills with smoke in anticipation of the French/Finnish collaboration that is The Dø. The band’s debut album A Mouthful was the first English language album by a French band to top the national charts when it was released in 2008, and most recent record Shake Shook Shaken was awarded Rock Album of the Year at Victoires De La Musique earlier this year. As the house lights went down, a green laser cut through the smoke and hung over the crowd, catching the stages newly acquired fringe and splitting across the back wall. As front woman Olivia Merilahti kung-fu kicked her way onto the stage with a look that can best be described as Audrey Tatou (a Clermont-Ferrand native, as it happens) goes Kill Bill, the crowd erupted. Moving on from the looser feel of Both Ways Open Jaws, The Dø present slick synth pop writ large and from start to finish they had the crowd in the palm of their hands. Singing in English, French and Finnish, and having a great time while doing it, The Dø seem to be the embodiment of Europavox’s vision of “Unity and Diversity”.

The sheer diversity of acts on display at Europavox is a testament to François Audigier, the booker of the festival and of the Cooperative de Mai venue in the city. An ideas man with an infectious energy, he is the kind of person who honours ideas laid out in long, sprawling 3am conversations. Indeed, it is as a result of one such conversation that at one point during the festival we arrive at the Ski Resort of Super Besse, some 50km from Clermont Ferrand, to see Belorussian post-punk band Super Besse be introduced to the Mayor of Super Besse under the watchful eye of French television. He’s also responsible for the ‘red thread’ band playing all around the festival, British beat-box blues band Heymoonshaker, who perform on pretty much every stage at the festival, as well as plenty of impromptu sets around the festival grounds.

Audigier is also the man behind the festival’s first Metal showcase, headlined in gloriously thrashy fashion by French heroes Gojira, and after hours Club ElectroVox, which hosted of The Dumplings (Poland), the retro-futuristic visions of New Wave Syria (Slovenia) and Etienne Jaumet of Zombie Zombie amongst others.

With a line up as wide and varied as Europavox, it is inevitable that some acts will not work, or translate as well as others to a new audience, and indeed this was the case. However, failures were the exception rather that the rule and for those with an open mind and ears there was plenty to discover at the festival. It is perhaps fitting given the festivals ethos that some of the best reactions (and biggest dance parties) of the weekend came when artists explored different cultures and collaborations. Copenhagen’s Alo Wala whipped the crowd into a frenzy, coming back to play ‘Cityboy’ for a second time after running out of songs. A Punjabi-Indian rapper from Chicago who set up her own NGO in Guinea Bissau to encourage local rappers, teamed with producers from Denmark and signed to Portugese label Enchufada, the fusion of Global bass, dancehall, trap and juke proved to be a heady mix. Portugal’s Throes and The Shine brought the party even harder, fusing Angolan Kuduro with rock and electronics and high energy raps for an all out sonic-assault on all the senses that leaft the outdoor arena in a sweaty mess by the end of their headlining set. It was clear in the moments after the end of Throes and the Shine’s set that Europavox had achieved its goal of people acting, living, playing and dancing together, regardless of age, nationality or background. The joyful smiles said it all.