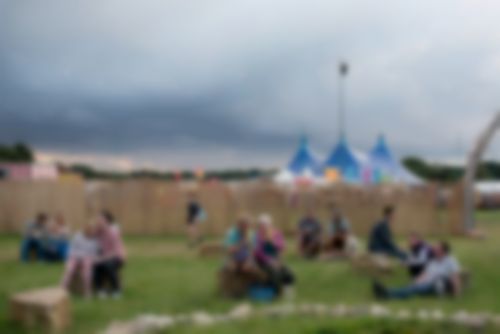 Our tents packed and our homeward journeys made, we look back on the last day of End of The Road Festival.

It would seem that Damien Jurado wasn’t quite expecting the sun drenched setting in which he’s playing today, as he speaks with the crowd about where he’d be able to find wellies for his over-sized feet were the weather to turn. This laid back chat lands in between a diverse mix of songs lifted from the Seattle troubadour’s extensive back catalogue, topped off by his most recent effort, last year’s Maraqopa. It’s a gentle and beautiful mid-afternoon set, with songs such as ‘Museum of Flight’ and his latest album’s title track journeying between the sorrowful and the sublime, as a captivated audience sits attentively in front of a sun-laden Garden Stage. Francine Gorman

Caitlin Rose takes to the Woods stage as we say a final reluctant goodbye to the sun that’s smiled down all day. Her sweet, country-kissed folk provides a bedding for the joyously American lead guitar and couldn’t be a more perfect fit for this Sunday evening. ‘Pink Champagne’ is real stand-out from her upbeat set, but Rose’s performance is entertaining and totally compelling throughout. Often reminiscent of June Carter’s playful on-stage persona, her exclamations (“Oh, mercy!”) puts wide grins on the faces of the quickly-swelling crowd as the general atmosphere shifts to one of total contentment. Merlin Jobst

Whether tapping out twinkling glockenspiel melodies in the air or unfurling stories about manically stalking Kirsten Dunst through the night, Jens Lekman’s demeanour is totally endearing. His peculiar, charming narratives evoke richly detailed visions of his quirky world from Sweden to Melbourne. Weaving together the band’s thoughtful, bubbly folk-pop with his enviable knack for a great hook and his idiosyncratic magnetism, it is basically impossible not to grin ear to ear at. When the tempo picks up, most of the crowd is united in synchronised dance routine in one of the most heartwarming highlights of a endlessly heartwarming festival. Sam Briggs

“It’s a pleasure to be back at one of the finest, if not the finest, festival in Britain” says Frightened Rabbit’s Scott Hutchinson as he greets the enormous crowd before him. The Scottish frontman’s performance has gained significant zeal over the last few years, and a great deal of his time on the modestly-decorated stage tonight is spent jumping back and forth between the microphone and his band, dealing out an effortless flow of humorous chat. Newer songs, such as the frantic ‘Lonely’, are received with as much warmth and enthusiasm as the classics, tonight including the infectiously fun ‘Old Old Fashioned’ from their lauded album Midnight Organ Fight.

The riff-heavy ‘December’s Traditions’ showcases the extent to which Frightened Rabbit no longer merely merit the ‘folk’ label they’re often predominantly associated with but have moved into heavier indie territory, and this distinction has had a hugely positive effect on their live sound – which is now tighter than ever. Scott’s love for the festival is not downplayed; he departs by professing “I really don’t mind talking behind Reading’s back; it almost made me want to quit my fucking job. Thank you, though – you’ve re-invigorated me”, and playing the set out to strong cheers. Merlin Jobst 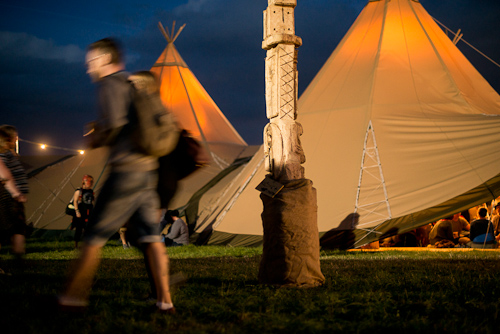 The second half of the Scottish brace to close Sunday night come with strength in numbers. Belle & Sebastian’s seemingly 15+ member band lend bombast to the newer, poppier cuts off their latter day career, whilst never overshadowing frontman Stuart Murdoch’s charisma or the tracks aired from their first three albums. It’s a predictably infectious blend of everyday poeticism and the romantic, twee breeze their back catalogue is so recognised for. In the light of their career, tonight’s set might feel a little lightweight, but their apt booking at this “Bugsy Malone of festivals” comes through in their ability to hit the nostalgia revelling thirty somethings whilst delivering a sweet sheen perfect for the festival’s younger dynamic. As the festival’s founder, Simon Taffe, takes to the stage with a band of young companions for a arm waving dance routine for ‘The Boy with the Arab Strap’, and the band return for a encore of ‘Get Me Away From Here I’m Dying’, there’s a blooming optimism emanating from the stage ensuring a euphoric end to this year’s festival. And by end, we mean, we’re heading to the Forest Disco now. Sam Briggs

You pretty much want two things from a festival headline show; you want to see the band loving what they’re doing, and, more importantly, you want an abundance of “The Hits” in rapid, glorious, succession. The bit where, closing The Garden Stage, Dinosaur Jr play ‘Just Like Heaven’, and follow it immediately with ‘Freakscene’ is 100% a band doing festivals right. Played with a pure joy and raw commitment, they wrap up proceedings in thrillingly noisy and celebratory fashion before we run off into the forest searching for more dancing and late-night pop thrills. You never really want End Of The Road to stop. Dave Rowlinson