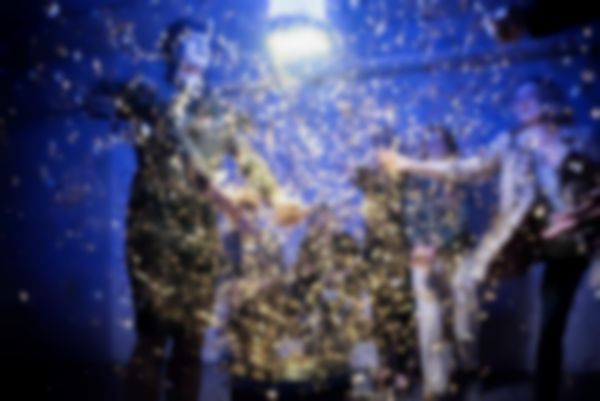 It begins in disorienting, sensory-depriving darkness and ends – variously – with a woman crawling the floor with an axe in her hand, a man with a fox’s fur covering his crotch, another topless smeared in mud and clay, and many of the small audience’s foreheads and faces caked in oil and gold glitter.

The Danish band Efterklang, with a supporting cast of singers and musicians, are the deranged minds responsible for this singular concert experience which took place in a cold war bunker – The Atom Basement – some way below Copenhagen’s old municipal hospital.

LEAVES – The Colour of Falling is an opera of sorts, an experience that is at turns hilarious, moving, frightening and delirious. Composed by Efterklang’s Casper Clausen, Rasmus Stolberg and Mads Brauer (no stranger to the unusual when it comes to the recording of albums or putting on a unique concert experience), along with Karsten Fundal and with help from the Copenhagen Opera Festival and the Sort/Hvid theatre, it purports to tell the tale of “a group of people who have gone into exile underground, in a cultic universe where unknown forces prevail, performing experiments to gain eternal life”. As we descend the stairs into the bunker and we’re plunged into darkness, it’s as close to a purgatorial waiting room as you would ever wish to get.

Then, as eyes adjust slowly, things start to take shape. We remain unguided, no boatman to take us through hell’s waters, and as we wander along corridors whose ceilings birth exposed wires, LED lights and sacs filled with white liquid, some of the rooms begin to expose their curiosities and horrors. In one, a giant ball of fur is lit by glowing wires. Another reveals shelves of watermelons wrapped in film, another has a woodpile lit by a red throb. As the wandering continues a seated figure turns out to be alive, shrouded in a death mask and elicits gasps of shock and recognition as we shift slowly, then quickly, past. After all this we’re greeted with the banality of a waiting room of sorts – furniture all covered and padded in white material – where fresh coffee brews. 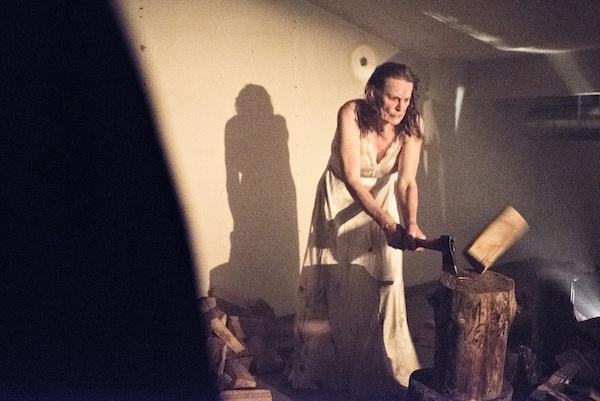 It’s at this point we realise music is actually playing and we’re here to witness an opera. So as the sound swells and builds, we’re guided into a golden room and invited to sit on patio furniture, facing the players. There’s around thirteen on stage, the rhythm led by Stolberg’s solid bass, and each and every one of them sports black dress and gold glittering lips. The lolloping beat and xylophone percussion is instantly recognisable as Efterklang, but as the voices of sopranos Katinka Fogh Vindelev and Lisbeth Balslev mix with the bass and countertenor of Nicolai Elsberg and Morten Grove Frandsen (who is a terrifically camp and magnetic presence throughout) we’re taken somewhere entirely new. The sound is incredible, bouncing off the concrete walls and it’s the most euphoric moment of the night, before we truly reach the bottom of the abyss.

This act lasts for around twenty minutes or so before the players disappear out the door, leaving us once again to our own devices. This time, though, music continues – Brauer conducts proceedings from a handheld devices – but it’s punctuated with voices echoing along the corridors, and not all of them sound welcoming. Investigating, we find new ways to be shocked and fascinated….

One room has a cellist who eventually collapses on her back, playing as she undergoes a sort of seizure. Another has a trio of string players surrounded by bubbling liquids while elsewhere Elsberg, shirtless, grabs audience members, covers members of the audience in oil while doomily intoning in the form of a pagan ritual. In a polar opposite, Frandsen trills beautifully while operating an industrial fan which sprays the room with gold leaf, smearing our lips with glitter as he sashays out of the room. The show is stolen by veteran opera star Balslev, though, who flails and crashes her way through the padded bar, shot glasses of vodka being downed and thrown here, there and everywhere.

It’s clear we’re experiencing personal purgatories here, and as shocking and unsettling as they are, the audience cannot help but be drawn to each experience. Maybe it’s because we think safety in numbers is better, maybe it’s the cultish feel or the powerful aura of these players which pulls us in…whatever, it’s close to overwhelming. 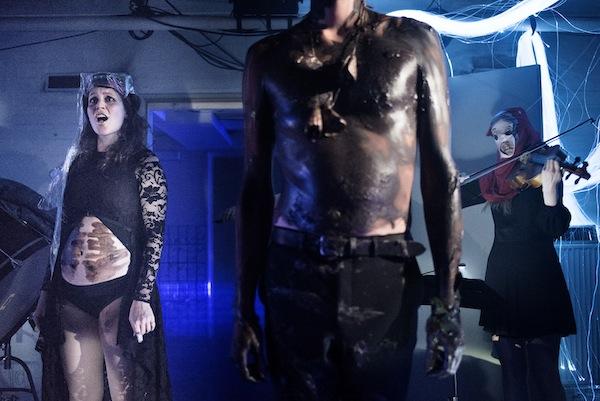 The last act is to return us to something approaching a concert setting; there is a band set-up of sorts but that’s unbalanced by Elsberg smearing himself in mud and attaching leaves to his torso. Then Balslev’s character appears again, going full Wagner with clanging axe and pleading, piercing vocals and looks, crawling in front of the audience and locking eyes. You want to look away, but you just cannot as she and Elsberg sing of the first, second and third abyss as marimbas, bass and accordion reverberate around the small room. Then, as all the players once stand in front of us, repeating a lullaby of falling leaves we almost approach some kind of peace; that feeling is heightened as one by one the group walks down a corridor lit by blue lasers singing a dirge about being taken to the next world, bringing this spectacular event to a close.

All this could be an allegory for the destructive power of climate change, or perhaps it’s simply about our capacity for self-destruction in the face of attempting to have our cake and eat it. The key lies somewhere in these subterranean rooms, hidden in this theatrical, immersive and interactive experience. As we walk the streets of Copenhagen back to our own lives away from the world of LEAVES, there’s a pervading feeling like we’ve woken from a dream, unable to tell if the last two hours really happened. The tar and glitter says yes, you have physical evidence. Psychologically we’re left unsure: unsettlingly beautiful, touching and funny, Efterklang and company have left us with the most gorgeous, unforgettable scar.