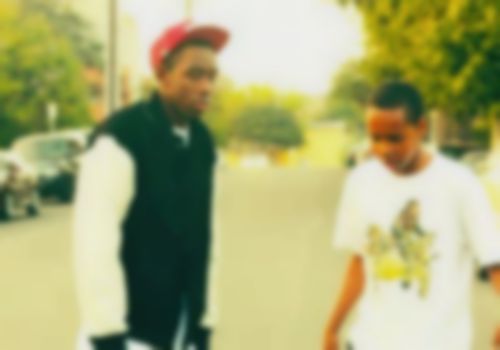 It’s not as easy as you’d think to get rid of a spare ticket for Earl Sweatshirt and Tyler, The Creator. It can probably be put down to everyone who wanted one – and there were lots of these people – having already made sure they have one, such is the devotion the pairing seemingly inspires in their fan base. That, and the fact that everyone who didn’t want one – and as I found out, there were lots of them too – seems to either not understand the fuss around the Odd Future duo, or absolutely hated them.

Being a pair who thus far into their career appear to have put as much effort in to being deliberately confrontational as they have their music, that’s probably how Tyler and Earl like it. Their concern for their detractors has always been negligible, but their appreciation for their fans is tangible – both Earl and Tyler really can’t seem to believe the reception from this crowd of Koko kids, who rarely stop jumping, clambering on each others’ shoulders and hanging off balconies to get a better glimpse of them. One of the most diverse crowds in terms of gender and ethnic background you’re likely to find at any gig, even in the capital, the atmosphere is one of nothing but abandon. Tyler and Earl feed off it, and it feeds off them, allowing the show to take on a life of its own.

This isn’t a reflection on the clientele, but I’m reminded of that bit in Brass Eye where there’s footage of a bus load of flies going on holiday to Africa (“they’ll enjoy Somalia, but should they?”, comments Chris Morris). If you listen to the words, well, there are the reasons the duo provoke such disgust. Whether you think they’re joking around or adopting characters or whatever really, there are stories of rape, violence towards women and such creatively foul phrases that even the most avid Viz reader would have to look up on urbandictionary.com. Should people – especially in a crowd this young, this impressionable – be singing along to this like they’re cheering the winning goal in a cup final? Assuming you’re a relatively together person, looking at the subject matter here, what exactly is there to enjoy about it? It’s… sick, isn’t it?

Here’s the thing – it’s the music. The actual music is great. And I mean really, really great. It’s hip hop that sounds fresh in a way that will be scary to anyone over their mid twenties but resonates with an ever present bass sound that taps in to something far more primitive, and won’t stop shaking my nose for the whole gig. I completely get why everyone here is losing their shit to it, and if I wasn’t so preoccupied wondering what Caitlin Moran would think about all this I’d probably have lost mine too.

Being neither a signed up member of the Odd Future haters nor one of their ardent adorers, I found myself here out of curiosity. Going back to Brass Eye, I didn’t want to be like one of those politicians who called for Chris Morris’s head without having even seen the pedophile special they were supposedly so enraged about. I’m glad I came, and not because it gave me a reason to be angry. This seemed like a pretty joyous experience to me, and was even more so for the hundreds of kids uncontrollably excited about it (“Oh you naaaaasty”, Tyler kept telling them, to their delight).

Tyler, too, seems pretty thrilled – mostly to be back performing with his friend Earl. He regularly refers to this evening as “Earl’s night”, as if it’s the first time his pal’s been able to let off any steam since returning from his elongated exile in a Samoan boarding school. Earl gets to choose which Tyler tracks they perform under their collaborative title ‘Earlwolf’, and when it’s Tyler’s turn, he almost always plumps for something from Doris, Earl’s new solo LP, often selecting the most downbeat tunes from what is a particularly downbeat record. But all the same, everyone reacts as if a wedding DJ had just dropped ‘Come On Eileen’.

Tyler is a commanding presence physically – or maybe that’s just how he looks when he’s got his arm around the pint-sized Earl – but also vocally, his voice seemingly getting lower and lower each month, so much so that soon he won’t have to pitch it down for comic effect at all (a trick of which he’s particularly fond). ‘Pigs’ is made all the more terrifying because of the huge grin it’s delivered through, and a rampant run around his ‘Domo23’ gives the gig its first instance of crowd members losing their voices, but Tyler’s right about it being Earl’s night. This kid, right… wow.

Earl Sweatshirt stands at about five foot tall, wears this hugely oversized white t-shirt emblazoned with the name of his own album, has a voice that sounds like exactly what he is – a kid – and yet is the most astonishing rapper and completely commanding presence this stage could wish for. He’s a nimble chap who can bounce off PA systems like the most athletic of his OFWGKTA compatriots, but when he’s stood static in the middle of the stage, delivering verses from the slick, brief autobiography of ‘Chum’ and the grief-stricken ‘Burgundy’ a cappella, they’re the only times this crowd goes silent, stays still, and just listens. Tyler, staring on whist stood on the speaker to stage right, seems to find his buddy similarly mesmerising – on these numbers in particular, he spins yarns with a skill beyond his years.

So it’s not just from a purely musical perspective, but also a performance one, that Earlwolf gigs are great. You might think they’re stupid to say the things they say, but there’s no arguing over whether these are skilful MCs and consummate showmen. They are not idiots. As Steve Albini noted when talking about OF, to be a really effective asshole, you’ve got to be quite intelligent. And this pair are expert assholes, enjoyable in the same way as it is to watch Christian Bale be so hateful yet charming in American Psycho.

Films like that are prime examples of why it’s fine for art to include mentions of horrible things. What I suspect those who’ve really thought through their opposition to all things Odd Future take umbrage with however is that Tyler, Earl et al seem to make no attempt to really grapple with such issues in any way. They’re just mentioned, left there to hang, fester, do what they will. They’re shouted at an audience, and then shouted back like a chorus.

Upon leaving, I wonder about the people who love them, the people who hate them, and whether either is correct to do so. Both seem justified in their reasoning behind their positions. Tyler and Earl are supremely talented people who enjoy saying often extremely unpleasant stuff. As for whether the skill with which they say it elevates it to a level of art where you can justify its content… I’ll be in touch when I’ve developed the requisite courage to descend from this fence.