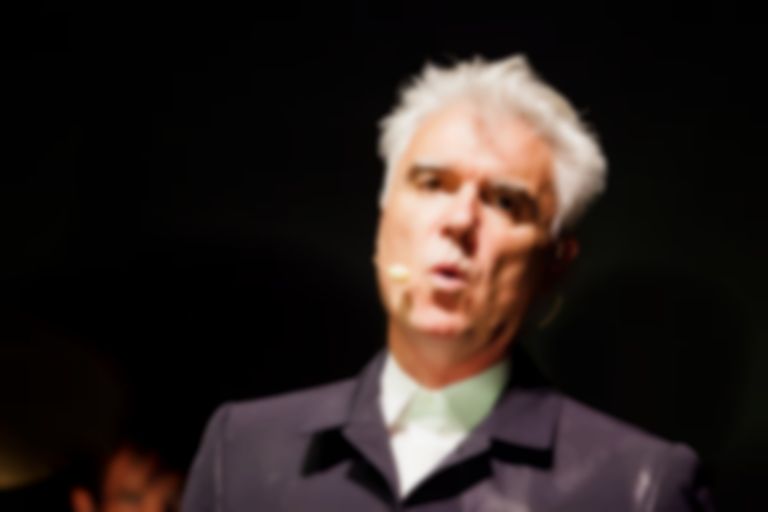 My favourite moment from many high points in the career of David Byrne and Talking Heads is the Jonathan Demme directed 1984 film Stop Making Sense; to me, that film and the music is the real ending of Talking Heads as a band. Sure, they released more albums but they never toured again after that artistic high point. Onstage, just before launching into a cover of the particular track at the heart of her story, Annie Clark, aka St. Vincent, revealed to the audience in Glasgow’s Royal Concert Hall that hearing ‘Burning Down the House’ during Revenge of the Nerds started a lifelong love of Byrne’s music, culminating in their collaboration on the Love This Giant album and tour. And it’s kind of a combination of that tourfilm and that song that we’re treated to onstage tonight: kept are the synchronised and choreographed dance moves (watch Byrne and guitarist Alex Weir step in time back in 1984), while the energised funk of that song is adapted and expanded by a stunning seven-piece brass band who step, jive and jump for close to two hours behind the duo responsible for this incredible musical spectacle.

It’s amazing to think that this elaborate stage show comes barely twelve months after music files and ideas were sent across the world between Byrne and Clark, finally coming together as Love This Giant. As good as that record is – and it’s very good indeed - this version surpasses it by miles.

As you might expect, the performance is dictated by Byrne, resplendent in all white, with a gleaming pair of spats and that shock of white hair present as always. He reprises his dance moves from Stop Making Sense as some kind of awkward band leader/principal dancer while Clark, bottle blonde and dressed immaculately as ever, teeters upstage and down in her heels like a balletic marionette, calling all sorts of noises from her electric guitar in the brilliant style we’ve come to expect and love from her solo records. The stage show takes its cues from the studio version, but Byrne and Clark run with their initial ideas of avant-garde ragtime, marching bands and go big: the brass stabs of opener ‘Who’ sound brasher and sharper, the awkward angles of ‘I Am An Ape’ are rounded off to smooth funk and when ‘Forest’ and ‘Ice Age’ follow one another there’s a danger of the roof of the venue flying off in as the brass goes atonal and Clark’s magical guitar work threatens to tear a hole in the space/time continuum. At the other end of the scale, the music hall swing of ‘The One Who Broke Your Heart’ and ‘Outside of Space and Time’ are sweetly intimate as show closers.

The real highlights and bonus treats come, though, from Byrne and Clark’s back catalogue: Talking Heads’ ‘This Must Be The Place (Naïve Melody)’ languid funk is accompanied by some goofy Byrne footwork, ‘Lazy’ gives you a grin like it always has done, and ‘Wild Wild Life’ lets each of the backing band take turns on vocals as they conga past the microphones. Clark trumps all that, though, with a wonderful rendition of ‘Save Me From What I Want’, a stormy ‘Marrow’ (which sees two lines of brass close in on her as she sings), a version of ‘Cheerleader’ which has Byrne and the band lying prostrate on the stage, a comic Theremin battle with Byrne on ‘Northern Lights’ and, finally, an utterly swoonsome, waltzing ‘The Party’ during the second encore. Judging by audience reaction we’d probably best call it a draw though as Byrne – aided by Clark, just as she is backed by him throughout, and there’s no doubt she’s his best collaborator alongside Brian Eno – gets everyone up on their feet with killer versions of (a request for ‘Psycho Killer’ is met with a growled “I AM the psycho killer!” by a shrouded-in-darkness Byrne) ‘Burning Down the House’ and a euphoric set-closing ‘Road To Nowhere’.

I’ll go on record and say that I’m unlikely to ever experience a show like this again in my life; as much a contemporary dance performance as a pop concert Love This Giant is an unqualified triumph.
Photograph by Jason Williamson in London.