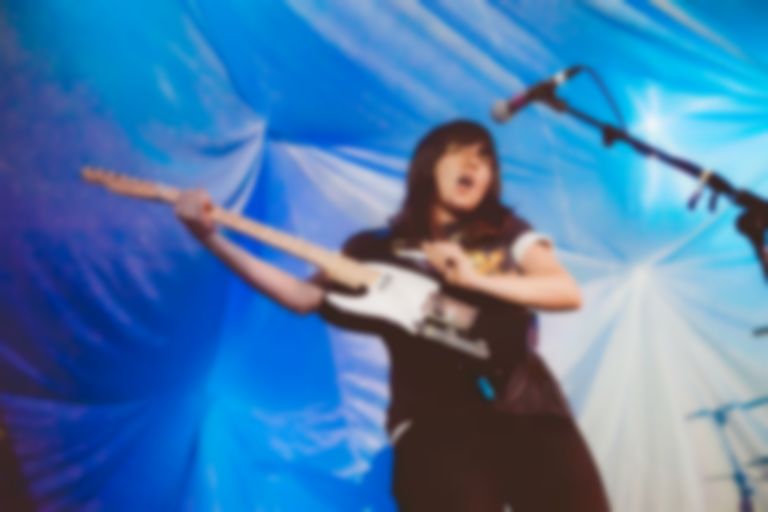 It’s not because of the song’s lazily drawled opening lines: “I masturbated to the songs you wrote. It doesn’t mean I like you man, it just helps me get to sleep”. Instead, the insouciant chords indebted to Nirvana’s “Dumb” disintegrate into a full-on meltdown of squally feedback which lasts almost ten minutes. Barnett, the girl who couldn’t be bothered to fix her TV for four years, is headbanging and soloing on her knees, all three band members wringing every last drop of noise from their instruments.

The ear-splitting din will be a surprise to those who bought a ticket tonight on the strength of Courtney’s mercurial current single “Pedestrian at Best”. Even more so for those who came expecting an evening of slouchy alt-grunge in the vein of “Avant Gardener”, her breakout single, a track which tells of a panic attack during a half-arsed attempt at gardening. Barnett, it seems, is a performer with no interest in the predictable.

It’s one of the many reasons she’s a breath of fresh air. She couldn’t care less about money - she recently called it “gross” and operates her own record label, Milk Records, on a shoestring budget with some mates in her hometown of Melbourne. She has no time for posturing. Her sharp wit and imagination will prove her fortune.

Tonight is Barnett’s second, consecutive sold-out night at the Ballroom and zippy opener “Elevator Operator”, from recently released debut Sometimes I Sit and Think and Sometimes I Just Sit, immediately sets out her lyrical stall: candid and richly observational commentaries on life’s ordinary happenings. “Oliver Paul, twenty years old, thick head of hair wonders if he’s going bald,” she deadpans in her signature talk/sing style. Later, on the bluesy and chunky “An Illustration of Loneliness (Sleepless in New York)” she describes every last detail of an insomniac’s thoughts as they stare at the wall unable to sleep; “Counting all the cracks backwards in my best French/ reminds me of a book I skim-read in a surgery/ all about palmistry/I wonder what’s in store for me.”

On record, the sole focus is Barnett’s wry, languid delivery but onstage these songs impress sonically too. “Dead Fox” and “Are You Looking After Yourself?” are played with a Darling Buds-like wavery guitar tone which sounds gorgeous. Things are also a hell of a lot beefier. Live, she’s less a solo artist, more the front woman in a tightly-oiled band and together with bassist Bones Sloane and Dave Mundie on drums they’re capable of creating quite the racket. A closing duo of “History Eraser” and “Pedestrian At Best” has her tripping over the lyrics at breakneck speed. By the end of the latter, the chorus most people came to hear – “Put me on a pedestal and I’ll only disappoint you” - has been reduced to shouted noises with Barnett more interested in battering furiously at her guitar.

Unafraid to let things sound a little messy and ugly, it’s heartening that Courtney’s ramshackle rock has caught the imagination of so many people. In a world full of oversexed and over rehearsed pop stars, she sticks out like a sore thumb in the best possible way. Rare and raw, the music world could do with more people like her.