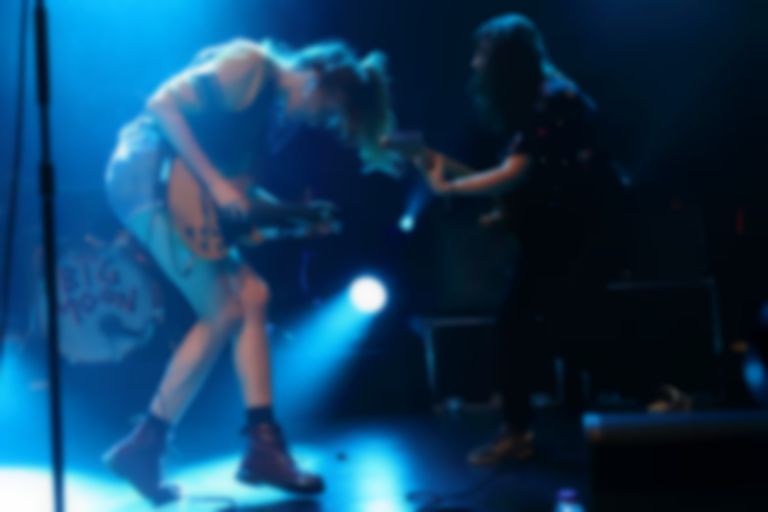 It’s hard to believe that The Big Moon released their debut album just six months ago. Not only because they’re already such an accomplished live act, but because the instant-hit of the album (earning itself a Mercury nomination in the process) has turned these zippy rock songs into anthems already. Tonight, in a packed KOKO, people are overjoyed to see this band, absolutely packing this place out, pogoing around, and raising their arms while aloft on each other’s shoulders.

Partially, they tap into certain seams of nostalgia, with lazy comparisons to bands like Hole and Elastica all too easy to make. And true enough, stripped to its basics, there’s a simple enough formula at play here: guitar and drums, single line refrains delivered with aplomb, ripping a middle route through ‘90s grunge and ‘00s indie. On record, the sound is loose and ramshackle enough, but tonight it goes into overdrive - volume, tempo and power all kicked up a notch, delivering a delightfully fierce live show with both precision and personality.

One of The Big Moon’s most impressive tricks is their ability to pair dense, driving grunge textures with such light and crisp pop songs. At one moment, they’re deep into glamorous guitar runs, pounding and shredding into each other in a cluster at the centre of the stage. The next moment, over the top of it all, they soar into three part harmony, with a bullseye hit of a chorus.

Tonight, there’s the a clear sense that The Big Moon are joyously riding the wave of their own making, feeding off the momentum of a critical hit, the Mercury nomination, a slew of successful summer festival shows, and now a victory lap of a tour. It’s great to see Juliette Jackson stood at the front of the stage, fingertips tickling the sky, hurling herself into the front row of the crowd for barnstormers like “Bonfire”. The sense of joy is infectious. If you had told me six months ago that I’d have any tolerance for a four piece rock band covering “Total Eclipse of The Heart”, I’d never had believed it. But I was charmed, as were hundreds of others, belting it out like it's the national anthem.

The set closes with the song that kicked this all off when it was released as a single a couple of summers ago - “Sucker”. Jangling into life with a scuzzy, country twang, it builds to its cool and ferocious chorus, closing out the night with bravado. Bassist Celia Archer earns herself a round of affectionate boos for revealing that this is their last show in a while, but if that means that they’re starting to think about a follow up record, it’s hard to grumble. Celia calls this year “the greatest year of our lives”, and tonight makes it easy to see why. They’ve been delivering one of the best rock shows of 2017, and there’s no reason to think 2018 won’t be even better.