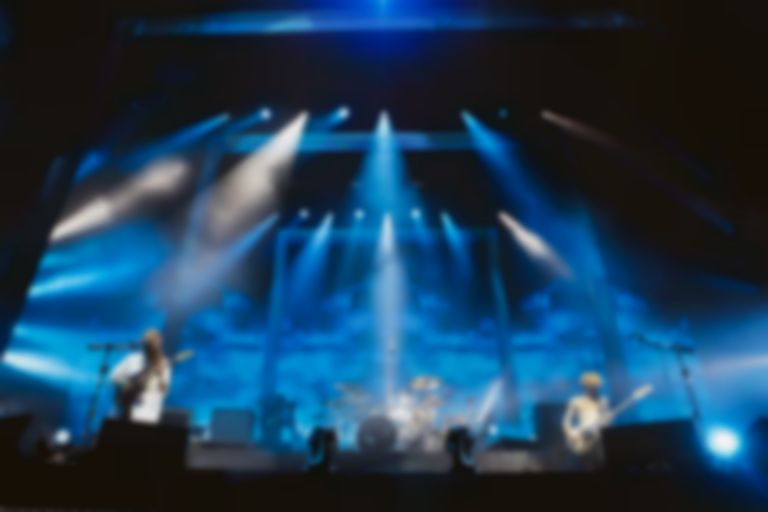 Biffy Clyro have been owning arenas since 2009’s Only Revolutions propelled them into rock’s upper echelons.

But it can’t be lost on Simon Neil, the band’s bare-chested frontman, that as he gazes out on a rammed O2 tonight (8 December), he's looking at the reward of 20 years hard slog. The Scottish trio’s ascent, along with twin brothers, drummer Ben Johnstone and bassist James, was a slow and steady one, from scrappy beginnings in Kilmarnock, to winning over the underground on their way to the country's biggest venues.

Tonight they couldn’t look more comfortable, kicking off with the bombastic “Wolves of Winter” from new album Ellipsis and “Living Is A Problem Because Everything Dies”, an opening salvo that’s so grandiose it almost tears the roof off. The band have brought with them spectacular production; giant concentric squares, ramps and platforms that match the epic scale of their back catalogue. Pits open during an explosive “That Golden Rule” while “Howl” incites a sea of pogoing heads. Lasers flash during an incendiary “In The Name Of The Wee Man” which has Simon and James thrashing their guitars like madmen and by the end, sweat is dripping from Simon’s unkempt locks.

The downright weirdness of Biffy’s jagged early material, that experimented with labyrinth-like melodies, fiendish riffs and schizophrenic anthemia, meant that when success came knocking, it was a surprise. Since then, the band have softened their sharper edges, alienating some of their fans in the process, but tonight’s performance promptly silences any arguments their critics could throw at them. Listen closely to “Different People"’s skittering beats and out of step vocals, or the shifting riff of “Sounds Like Balloons” and it’s clear that the idiosyncrasies of vintage Biff are still there bubbling under the surface. It’s just that the band have mastered the art of making the challenging digestible. For those who say the band aren’t as interesting as they used to be, there’s the mariachi horns of “Spanish Radio”, while the unsettling “9/15ths” puts paid to any sniping that they’ve stopped being hairy weirdos.

On the flip side, the more brazen pop of “Bubbles” and “Mountains”, have been well and truly embraced by the fans, inciting huge sing-a-longs, while hearing 20,000 fans chant the name of Simon’s late mother during the chorus of “Folding Stars" is about as wonderful an immortalisation as you can get. Looking at scenes around The O2, from groups of blokes in Biffy Fucking Clyro T-shirts bouncing with their arms around each other, to the lady on someone’s shoulders bellowing the words to “Black Chandelier” with life-affirming force, to the mature couple next to us who shoot to their feet for that first “WHOOO” in “The Captain”, Biffy unify the masses with raw, heartfelt emotion like no other band in Britain.

As chants of “Mon The Biff!” ring out it’s hard to believe that the idea of them as a mainstream, arena behemoth was ever a strange prospect. Right now it seems like the most natural thing in the world.