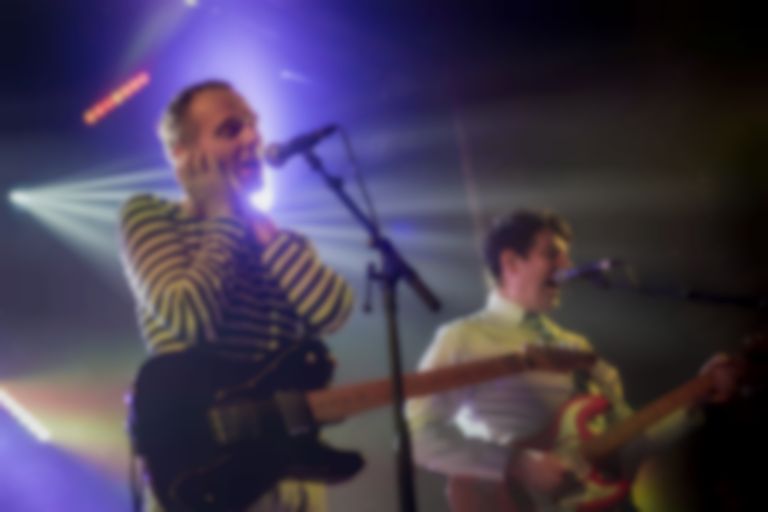 It could have been a brilliant career, but Belle & Sebastian are much too complicated a band for simply that.

We’re not even two songs in and introductions are yet to be made but enthusiasm has already overcome Stevie Jackson. Clad in an office-dad shirt and tie combo, an involuntary gyration has worked his guitar lose from the strap holding it around his neck. Someone - perhaps his mother? - has ran on stage to assist in re-holstering it and he is once again able to provide the jaunting riffs with which he has become synonymous, whilst stood next to Stuart Murdoch, who is dressed like a sailor friend.

Suffice to say, they've never been a ‘cool' band - a point they’re more than aware of, after twenty years together. The fashionistas haven’t afforded much attention to the Glasgow outfit - never the recipients of hype. As a result, they’ve found themselves without any significant explosions in popularity throughout a prolonged career. Instead, they’re much more a band who’ve slowly gone about their business, convincing us one-by-one, through word-of-mouth, until they’ve infiltrated us all.

Stuart asks “do you remember when we took Franz Ferdinand on tour with us? And when Snow Patrol supported us?’. Going on to say “we get them on the way up and we’ll get them again on the way back down too”. Murdoch is aware of his band’s longevity. Indeed, he is about to openly celebrate it with a series of shows at the Royal Albert Hall. Twenty years on from the original pressing of 1000 copies of Tigermilk on vinyl, they now sell for around £400 each. Proclaimed masterpiece “the red album" sounds every bit as glorious today, as it did when you first discovered it, be that in 1996 or otherwise. To think those two records were released only six months apart and as debut offerings, is something that’s hard to understand in the age of two year plus album cycles and over-thought promotional campaigns. I wonder if we’ll ever see their likes again? So celebrate them, we must.

As this evening shows, there’s a lot more to be celebrated in addition. Part of what makes Belle & Sebastian so engaging is their mystery. With a prolific and vast back-catalog, they’re able to surprise the most die-hard fans with unheard gems. They have an odd knack of making B-sides that outshine the A-sides - the song "Tigermilk" didn't even make it onto the album from which it got it's name, for god's sake! Somehow, a song can seemingly go from never before performed, to live show favorite in under three minutes. This is all happening tonight (13 June) in Glasgow Uni’s Debating Hall - the perfect venue for tonights show, as the old stomping ground of the bands formative years. Stow College - in which those first demos were recorded - is only a mile and a half on the bus away. I can almost believe the mythical all-night cafe in which the band supposedly formed, to be just round the corner somewhere.

Murdoch has struggled with aspects of his career. God protect you if you refer to his band as 'twee'. Over-simplistic and clumsy as that definition may be, it has stuck with the band, much to it's leaders dismay. Murdoch has also been frustrated by constant attempts to make a chart-topping, break-through pop album. Truth be known, his band is too quirky to deliver anything bound for mainstream success and I hope he's able to come to terms with that. What Belle & Sebastian have managed to do however, is bore the deepest of holes into the hearts of indie fans, not just on this tiny island but the world over, as the Australian standing next to me proves. They might not have had the greatest of commercial success but as the foreword on If You're Feeling Sinister points out, they are the product of botched capitalism, so you'd hope they'd be happier with riches of the soul, anyway.