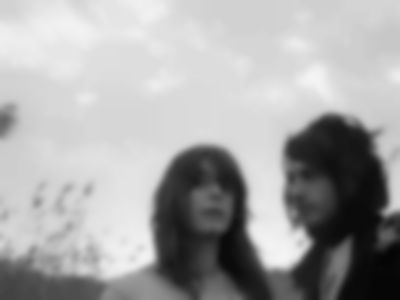 In this, King Tut’s 20th anniversary year, the venue has managed to book more interesting names than it has in some time, including tonight’s sold-out attraction, Beach House.

The Baltimore duo, adding a session drummer live, weave through a set of shoe glancing, but unselfconscious and charming, pop hooks. Most of Teen Dream, released on Bella Union at the end of January, is on show, opening with the hypnotic ‘Walk In The Park’.

Keyboardist Victoria Legrand’s pure, clear vocals are idiosyncratically different from recordings but nigh flawless, Nico comparisons made by much of the press making relative sense. The synthetic beats and sounds are juxtaposed to the organic feel of her voice. The live percussion is effective, the backing vocals carefully multiplied for ultimate effect. The ethereal harmonies evidenced on record are present live, slithering over the droning, hypnotic soundscape and simple, steady rhythms shown in new songs ‘Zebra’ and ‘Silver Sou’.

Alex Scally’s delicate, undulating guitar work is adept throughout, eerie tones layered beneath a cacophony of children’s keys and typically slow tempos. ‘Heart of Chambers’, with its lilting beats and breathy melodies, still tuneful and on-point, provides solace for those unfamiliar with the newer material.

Undoubtedly one of the main attractions of Beach House is Legrand herself, catcalls of “I love you” are fairly common place, met with humility and modesty from the band. Yet, it’s about more than her pretty visage, fringe coquettishly draped over one eye. Admittedly a difficult set for fans yet to extensively experience the newer material and in less intimate surroundings than their previous Glasgow shows, Beach House still win out. It is clear that, as a majority of the packed audience stand quiet and enraptured, that this plain but incredibly thought out pop music works because, live or in records, it communicates with hearts and souls of those who choose to hear it.