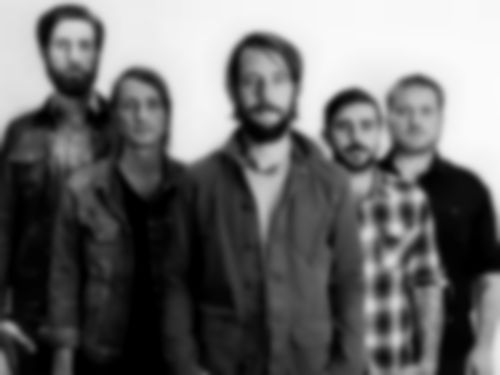 It’s been seven years since Band Of Horses’ debut album Everything All The Time announced the group’s arrival: a raw mixture of dustbowl country rock, meaty riffs and sonorous, A.M-friendly choruses. Their enjoyable, if unadventurous, performance in the august surroundings of Somerset House provides a decent cheat-sheet for those that nodded off through the intervening period.

The band has all too often trod carefully. Cease To Begin had moments of excellence, but was marred by too much filler. Infinite Arms made one giant leap for the middle of the road and while last year’s Mirage Rock was an improvement, it honed in on the band’s more plaintive side, rather than the heady combo of tenderness and excitement of yore.

Ben Bridwell’s beard is as trim as I’ve seen it as he takes the stage (his signature trucker hat remains), with the sun making its way to its resting place behind the western wing of the magnificent Neoclassical courtyard. When the band first emerged, he carved out a reputation for being an on-stage contrarian: often berating his audience for filming and photographing gigs. The Bridwell of 2013 has, it seems, come to accept such documentation as an irreversibly evil trend in modern performance. Not even a scowl is raised at the plethora of Apple gadgets hung hungrily in the air.

The set kicks off promisingly. The band launches into ‘Monsters’, one of the enduring moments of the debut, with Bridwell sat at a pedal steel, stage centre. It barely raises a holler from much of the audience, though, a polite mixture of young families, linen shirts and keenly-tended beards. ‘Laredo’, one of the standouts from Cease To Begin raises a slightly louder cheer, and the momentum is continued with ‘The Great Salt Lake’, perhaps Band Of Horses’ finest recorded moment.

But as the show goes on, there’s a real sense that the band is playing with the handbrake on – perhaps a reflection of the elegant surroundings and mild-mannered audience response. Cover versions, suggested to the band via its Twitter feed, provide some of the most interesting moments. In particular, a beautiful rendition of Gram Parson’s ‘A Song For You’ showcases the band’s finely-tuned harmonies wonderfully well. The opening bars of ‘Funeral’, inevitably, see couples embrace, and alarmingly large swathes of the audience turn its back on the stage, in pursuit of the ultimate selfie, while Bridwell beats a tambourine on the playful ‘Everything ‘s Gonna Be Undone’, one of the highlights of Mirage Rock.

Covers aside (and they are a real highlight), it’s arguably only on a souped-up version of ‘St Augustine’ that sees the band change things up dramatically: a previously gentle ballad injected with some real pace and vigour. ‘Ode to the LRC’ provides a nice singalong moment before the set, barely 90 minutes in, is cut frustratingly short. With no encore, there are plenty of grumbles from a sellout crowd as it mills back over Waterloo Bridge. There was real excitement about the Summer Series at Somerset House, especially now that the weather’s arrived to fit the occasion.

Here’s hoping the tepid nature of tonight’s show doesn’t seep into the rest of the fortnight’s festivities.