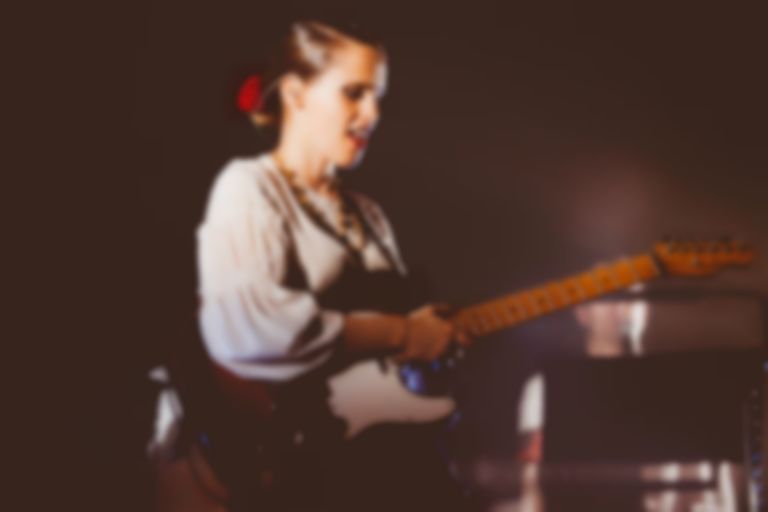 Now in its 22nd year, there’s something magical about the Meltdown Festival, where a series of musical luminaries select a range of artists close to their heart. Sometimes this can go spectacularly wrong - one can only imagine what Morrissey was thinking when he chose The Ordinary Boys - but tonight (22nd August) David Byrne’s choice of Anna Calvi proves inspired.

The Queen Elizabeth Hall, one of London’s most gorgeous venues, is perfect for what Calvi has in mind, where her phenomenal voice and guitar-playing is joined by a 12 piece choir from The Heritage Orchestra.

Byrne takes a seat in the stalls, excitedly chatting with members of the audience like a captain at golf’s Ryder Cup, following his picks across the greens, or in this case a variety of venues on London’s Southbank.

As the lights go down a gentle peal of a hymn fills the room, except it’s not coming from the stage. The choir, who are all wearing white cloaks, enter from the side of the auditorium and make their way down the stairs to the stage, singing a Capella without microphones, where they form a semi-circle around Calvi. With such drama created before she’s even sang a note, it’s clear that something special is about to happen.

They open with “Sing To Me” from One Breath, but whilst on the recording Calvi provided the spectral backing vocals, tonight the choir take on that role brilliantly and all thirteen voices dovetail around each other, coiled in a beauteous web.

Calvi, wearing a white shirt to match the choir’s attire, stands at the front of the stage for the start of the second song and unleashes a series of blistering guitar notes with such fluid ease she effortlessly debunks the ridiculous myth that the guitar is a man’s instrument, a subject that has rightly vexed her. It’s one of many times tonight she gets completely lost in the music, the choir join her and they drift into “Blackout” which sounds incredibly cinematic. Her songs were born for this type of interpretation.

With “Suzanne and I” the composed restraint is unshackled; with the choir looking into the whites of the audience’s eyes. It ends with her voice spiralling into the heavens and if there wasn’t a roof in the venue you could imagine the final vocal flourish making its way to the moon. It’s that good.

A cover of Bruce Springsteen’s “Fire” sees Calvi taking the lyric and making it sound like something she could have written herself, with the sensuality of the line "You can’t hide your desire, when we kiss, oh, fire" sounding full of longing, emotion and delight. The choir’s conductor sombrely stares into the audience with his hands clasped and it feels like a religious rite is taking place on the stage.

And then one of the things the whole room was hoping to happen comes to pass. Dressed all in white, Byrne joins Calvi to sing their collaboration “Strange Weather”. Standing side by side they look majestic; there’s a wonderfully natural rapport to their singing. Calvi doesn’t seem remotely cowed performing with a living legend and given the mesmerising nature of her stagecraft, why should she?

The choir leave their microphones and surround Calvi in a tight cluster as an electronic pulse throbs alongside the bass drum to herald her cover of Suicide’s “Ghost Rider” which is an absorbing treat interspersed with deliciously mercurial slide guitar. As it ends she rightly receives a standing ovation.

For the encore "Jezebel" she ramps up the theatre and matches the grandeur of Edith Piaf’s version. The way her voice veers into falsetto is astonishing and with the final flourish she works the word "Jezebel" through a range of notes with which reminds me of the similar power of Scott Walker’s masterful singing on “The Seventh Seal”.

Closing with the rarely played “The Bridge”, the choir sing a lament in Latin whilst Calvi stands stock still, looking upwards. The breath-taking choir build a mood of beautiful intensity and finally Calvi joins them. The song fades out into a filigree of hushed singing and they depart to another standing ovation.

Tonight Anna Calvi embraced flamenco, rock, blues and opera and seamlessly fused those genres to a choral approach, surrendering herself to the themes of the music, both emotionally and physically. In the process she delivered a performance that was as jaw-dropping as it was magical.