If yesterday had been a fairly early start, by now I had learnt from the regulars what had to be done for a close up spot at the main stage for this final day. So there I was at 4am huddled up in a sleeping bag, guarding an area mapped out for my friends. I tried to dress this up as an act of altruism in thanks for their hospitality, but there was no disguising the fact that it was done purely for my own satisfaction. Luckily by the end of the day they too had fallen under the spell of Emmylou. Luckily waking up naturally at 3am because of jetlag helped, and by now I had made some new friends amongst the familiar faces.

As the sun just about chased the morning chills away, there came what was probably the highlight of the weekend – a full band sound check from Emmylou that was virtually an intimate mini-performance for a couple of hundred punters standing round with their mugs of coffee. Half an hour of songs and chat (she’s a funny chirpy lady as I discovered) starting with a bluegrass arrangement of “Love And Happiness” (not performed later) and a gorgeous “Snowin’ On Raton” – an old but unissued (until the recent “Songbird boxed set”) Townes Van Zandt song that was delivered in the evening (with a shout-out to the ‘sound checkers’) along with his more well known “Pancho And Lefty”. This was almost too much of a good thing for any Emmylou fan, plus I got the chance to chat to people who had been watching her in bars in the early 70s with Gram Parsons.

The final day proper got off to a mellow start with Denver band Flexigrass – Pete Wernick on banjo, wife on vocals, and a bluegrass jazz fusion sound heavy on the vibraphone. Normally the two words jazz fusion would have me searching for the exit, but they weren’t overly serious, and it was a set I could let flow over me largely horizontal as I conserved my energy after the early start. Then Hazel Dickens – a name that had meant nothing to me, but was the start of what was to be a bit of a bluegrass history lesson at this stage this afternoon. A fan club was gathering specifically to see her, and Warren came out to announce the woman who was one of his inspirations for the whole festival concept – and has affected his political views with her provocative pro-union, feminist stance. She was one of eleven children in a poverty stricken mining family in West Virginia, and is 72 years old. Those who have heard Loretta Lynn’s vibrant collaboration with Jack White on “Van Lear Rose” will get some idea of the spunky little package of energy that wonderful lady possesses, and Hazel would easily take Loretta in a fight. When she walked into the middle of her band and curtly ordered “Hit it boys”, we knew we were in for a good time. There was high lonesome yodelling and there was classic picking from her boys. Only occasionally did the surprisingly chilly wind (despite the sun) get to her voice, and the other excuse she had was that she had been up singing way too late at Warren’s party the night before. What a trooper. For one of my friends she was the highlight of the day. 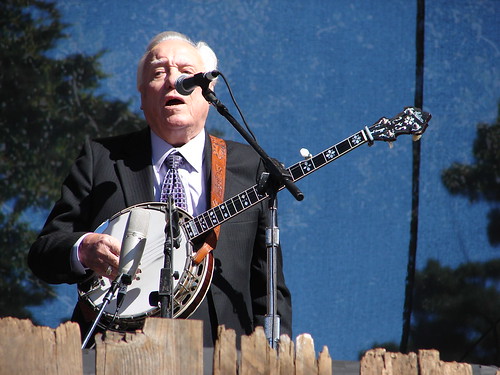 I was ready to enjoy the David Grissman Bluegrass Experience – especially as they featured former mandolin player from the Foggy Mountain Boys Curly Seckler (Grissman is a mandolin maestro himself), but that coincided with a blip in my mangled sleep patterns and today’s hillbilly dancer invasion, so although the music was great, I was feeling slightly below par sitting with a view of thrashing bare legs for the most part. I should have been dancing. Thankfully that passed, and another living banjo legend took the stage – Earl Scruggs – who has almost defined the bluegrass style since the 40s. Even if you do not realise it, you will know the instrumental “Foggy Mountain Breakdown”, and it was a treat to hear it, note perfect, live. The only other old timer I had wanted to see was on another stage that afternoon: Charlie Louvin, but he’s in the UK shortly as part of the Electric Proms season. And elsewhere the relative whippersnappers The Sadies and former Yorkshire punks The Mekons were doing their thing.

Next the elder statesman of the whole event – 84 year old Doc Watson from Deep Gap, North Carolina – the acoustic guitarist and singer who today put the white man’s blues into bluegrass. Blind since before his first birthday, his playing was beyond fantastic and he is one of the ultimate mountain musicians, playing banjo and harmonica as well. Just as marvellous as the music was his between song stories of Appalachian life and struggles with guitar sounds before electric pickups were invented. I could have listened to him all day long. If you ever get the chance, give this man the respect he truly deserves. 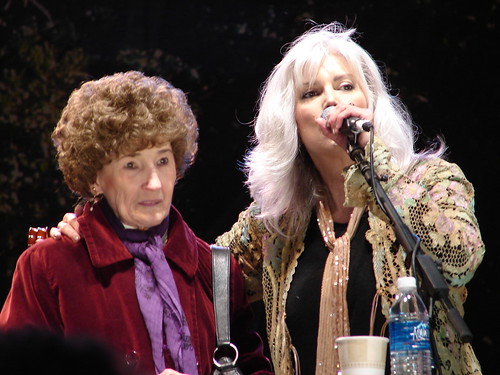 Jason Isbell from Drive By Truckers was headlining not far away, but as the festival came to a conclusion, most people’s minds were turning to its customary finale – Emmylou Harris at sunset. I had seen her with a full electric country ban over a decade ago, with her ‘new age’ setup at Cambridge folk festival last year, but this was to be my favourite configuration – the acoustic instruments of backing band Carolina Star could not drown out but only complement her incomparable voice with all its texture and sweet frailty.

All my travelling friends had returned and we were all set for what turned out to be a faultless memorable performance. Her almost signature opener “Songbird” started a set that was thick with older tunes – plenty of songs done by or with Gram Parsons and with a few gospel numbers, as it was, so she said, Sunday after all. A stunning a capella “Calling My Children Home” left me to pick up my jaw from the floor. Fellow musician fans were crowding the sidelines, and Warren always makes a point of coming out into the crowd to watch – he jumped over the barrier to find a spot around 5 yards from me. We’ve got a lot in common – shame it’s not a few billion though. At one point David Rawlins came round the front but was shooed away by unknowing security, so had to retreat to the side of the stage where he sat delightfully grinning like a schoolboy. For the last song, security urged the crowd to stand and move forward to ignore the strictly maintained access corridor and come right up to the barrier. We didn’t need a second invitation, and partied away to that last upbeat bluegrass number – with the black bouncers dancing away too in what for the younger lads had started as mock goofiness but soon turned into as much enjoyment as the rest of us. Emmylou – an absolute musical treasure, by any standards, across all genres.

Warren made a speech of thanks in what was expected to be the gap before the encore – and was roundly adored by all those present who realised how much they owed to his generosity. He is a humble and likeable man. Then Emmylou welcomed Hazel Dickens on stage and presented him with a banjo signed by the performing artists and many more from around the world. With this done there was no time for an encore, but it had been such a special day that it hardly mattered. Each day largely everyone had scrupulously taken the trouble to take all their trash home – the success of the festival and its continued residency in the park means that much to them. Or maybe Americans are simply much nicer than us. In San Francisco they are anyway. Lucky bastards.