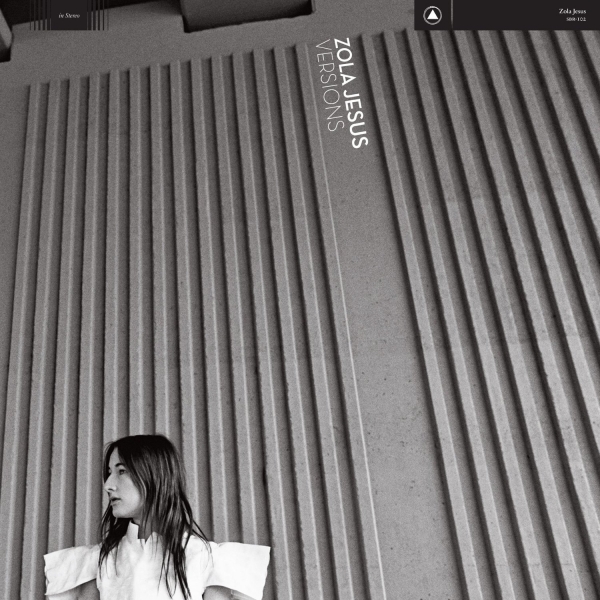 Nika Rosa ‘Zola Jesus’ Danikova has such a distinctive voice that it’s usually the centre of attention, but Versions’ brave re-working of nine of her previous tracks thrusts the gently avant-garde orchestral arrangements of JG Thirlwell and the Mivos Quarte into just as much limelight.

Somewhat of an oddity, Versions represents Zola’s fourth full length, although UK debut Stridulum II was more an edit of her previous EPs, further proof of her restless sense of experimentation and perfectionist tweaking existing material.

Stridulum II and its perhaps more straightforward follow up Conatus were critically acclaimed (and rightly so), but despite Versions technically not being new material, by doing away with the usual dark, semi-industrial synths it sounds sufficiently different and worthwhile. Production wise, it feels clearer, more striking, and more polished, the atmospheric swells and the robust, rich timbre of Danikova’s vocals benefiting hugely as a result.

Nowhere is this more perfectly exemplified than in her reworking of ‘Night’, the opening track from Stridulum II, stripped down, drawn out and made even more melancholy by the sumptuous strings. ‘Hikikomori’ is another good example, the original featuring faint strings behind thumping beats that were always crying out to be set free, and in so doing elevate the track to one of her best. ‘In Your Nature’ is also given bright new life by staccato violin stabs, rolling drums and almost uncharacteristic frivolity.

This is the crux of the issue. Any Zola Jesus fan will appreciate the change in perspective, and the Mivos Quartet deftly mix in some tactical dissonance with the more traditional soaring cadences keeping the record from feeling too saccharine and still in line with Zola’s playfulness, but equally will likely be left hungering for brand new tracks. Overall it’s probably her most accessible record, and thus represents the best starting point for any new listeners. It’s just difficult to wonder whether the time was yet ripe for a cheeky ‘best of’. Hopefully it’ll prove more of a stop-gap than a fully fledged mile-stone and we’ll see another new release that continues to step out into uncharted territory.

Regardless, taken on its own merits Versions is a record by turns beautiful, haunting and light-hearted, and is her best so far, if a little predictably. Danikova doesn’t go in for the easy melody and it’s not a catchy album by anyone’s standards, but more than ever she mixes up her tone and dynamics, lending the record a hitherto unseen depth and versatility. A successful experiment, a great record in its own right, and (hopefully) a great primer for a subtly evolved next effort.