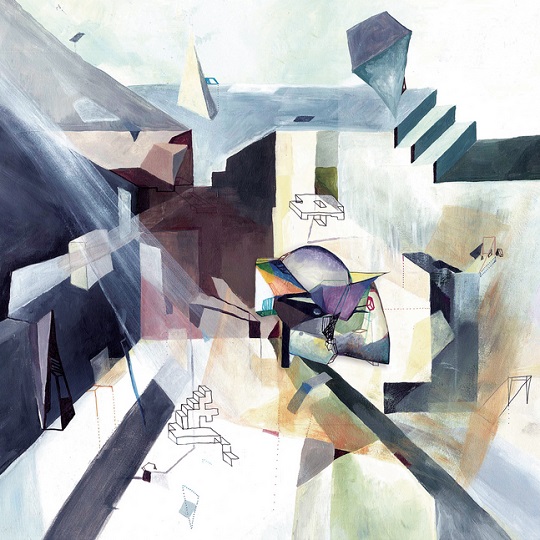 I’ve never been there, but from what I can tell in my infallible Internet research, Benton, Mississippi is a miniscule town in the middle of nowhere with population less than that of many large high schools, about an hour north of state capital Jackson. It’s the type of place that one would gather doesn’t see many outside visitors; a place where one could see “Steve Polyester” appearing, fully formed from thin air, one day only to disappear at the peak of the townsfolk’s burgeoning curiosity as vapourously as he’d arrived.

Benton certainly wouldn’t seem like a setting for five Brooklyn art/soul/pop/blahblahblah/etcetcetc musicians to light upon for writing and recording an album. But here we are, Ava Luna’s third LP, Infinite House. I fantastically imagine Benton to be like so many other anonymous backwoods towns in the United States in that it’s a bit like Hotel California – packed with a mystical allure whose sedation you don’t come to from until it’s too late to get out. Fortunately, Ava Luna did make it back to Brooklyn, but not before Benton had tattooed their souls, evident in keyboardist Felicia Douglass’ Escher-aping cover art and the album’s title, paying homage to a dilapidated and labyrinthine house where the band spent some time while in Benton.

Make no mistake, though, Infinite House is still unabashedly NYC despite the locale of much of its creation, which, to the band’s credit, is a great achievement, really. After a pair of albums where Ava Luna made no bones of their penchant for experimentation, slowly drifting toward cohesion and accessibility but not entirely congealing, it seems Benton’s Southern-fried pathos was the roux needed to thicken the sauce. Having straddled the line between the uncivilisation of America’s backwaters and hypercivilisation of New York City, applying what they experienced in Benton to their lives back home in Brooklyn, provided focus for the band to latch onto a high level theme and unified feel while still retaining a dizzying level of musical and lyrical adventurousness.

While lead songwriter Carlos Hernandez’s, as well as songs contributed by Douglass and guitarist Rebecca Kauffman, are impressively inscrutable, enough shards can be uncovered to appreciate the gist of what the band is saying on Infinite House. From the top, Hernandez and company pile drive opening track “Company”s cool groove with a pounding, red-throated chorus of “do you appreciate my company?!”  Amidst all the distractions these days that allow us to coast through our interpersonal relationships, it’s a pointed, valid question to shout at ask someone.  Hernandez alludes to this again in the wild, twisted funk of “Best Hexagon”, intimating he’d been “in the Babel of the humours” – in other words, the intoxicating but asphyxiating morass of voices, opinions, and attitudes that today resides at our fingertips – asking his confidant to just talk, to “sit for the conversation”, an act that has become so anachronistic it seems now, that he or she “might be shocked at what [they] see”.

Lead single, the feverishly creeping “Billz”, runs undertow to this suggestion and desire to stop and pause, to actually attentively communicate with each other. Once we’ve resolved to step more than ankle-deep into a relationship, past the texting of small moments, the fact-checking, past using “the language to impress you”, we can’t escape the cruel realities we’ve neglected in our pursuit – “our love ain’t gonna pay my bills”.  And what of the enigmatic saviour of Kauffman’s sly, spoken word piece, “Steve Polyester”? Is he truly the embodiment of all the disparate things we gawk at with desire or does he just seem that way – does it even matter? Perception is reality, increasingly so, as we abolish grey areas by anonymously creating fact out of what we passively “see” rather than what we experience.

Life is indeed an infinite house, be it at one of only the several crossroads in Benton, MS or stacked in flats ten high and three deep in Brooklyn, NY. There are endless rooms, each in different colour, with assorted decor, setting its own mood. So it is across Infinite House’s 11 tracks as the album runs rough shod over genre pigeonholes. Some might consider it messy, and the old adage is, life is messy; well, the latter is true, which lends it its exhilarating beauty. Hernandez yelps, quavers, yowls in his falsetto; Douglass croons with peerless soul and Kauffman drawls with effortless ease; all the while Ava Luna glide, float, mash, twist, twerk, yada yada yada – and it’s exhilaratingly beautiful.