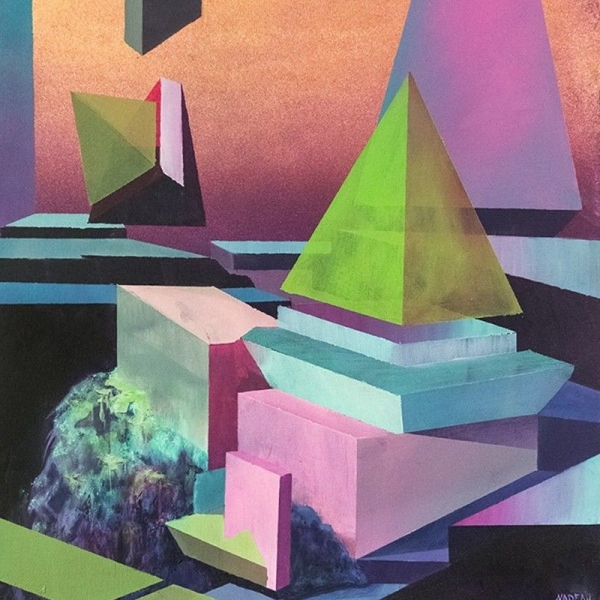 First things first: Xander Harris won’t eat your brains. Not anymore, at least. The Austin synth sorcerer – AKA Justin Sweatt – who had something of a cult hit with his 2011 debut lovingly spoofing B-movie horror has matured in the years that passed, and returns with a record that appears more and more opaque with each listen.

As on previous records, California Chrome is littered with nods not only to macabre electro forebears – Goblin and Skinny Puppy are often cited as inspirations – but also legendary videogame composers like Yasunori Mitsuda and Kenji Yamamoto of Chrono Trigger and Metroid respectively, both in sound and in concept: everything about Urban Gothic (with the song titles -"First Body", "Tanned Skin Dress", "End Credits") was an expertly irreverent homage, but the kitschy samples and the play-doh guts and gore were strung together with a very genuine appreciation for narrative and atmospheric complementarity. This carried – to varying degrees – through CHRYSALID and The New Dark Age of Love, the latter of which saw Sweatt take on a project that critics agreed was a more solemn and consciously introspective affair.

It’s this strand that Sweatt picks up on California Chrome: the recurrent penchant for heavily modulated film samples is there on ‘Predator State’, a malevolent and louche cut that percolates like a foul mist across seven minutes, with snippets of dialogue including “You’re an inhuman bunch of fuckin’ little bastards and bitches” and “Are you a worshipper of the devil?”; and so too the danceable pop lock beats on July's teaser ‘Buckle Bunny’, its glowing prismatic shapes obscuring a plaintive avian wail. But we’re a long way from Urban Gothic, and the grainy horrificata Americana is pupating into a sound that skirts the edges of grandeur: in a 2013 interview Sweatt professed a love of cyberpunk and the songs here feel much more Akira than C.H.U.D. The will to melody balances unevenly on the tendrils of the underlying milieu in highlight 'Straight Up Satan', brushing against one another in passing, mapping seedy cityscapes where manhole covers exhale ghostly fragments of code.‘The Scarlet Deception’ hums and crackles with neon warmth, its beats measured like the distances between streetlights on broad and empty inner city roads, and can’t shake the creeping fear of pursuit that dogs the cut and reappears in closer ‘Dirts’, set to the rhythm of a deafening heartbeat – or are they footsteps? Everything begins to slide out of alignment and California Chrome reaches its wavering, warbling, distorted end.

Urban Gothic, true to its cinematic muses, was refreshingly decisive and linear, but since then Sweatt seems drawn more toward tracks that swell and hiss with complexity. The disavowal of simplicity works when it produces tracks like these that build into eerie anti-crescendos, slipping deeper into anaesthetised sleep. This isn’t synthpop à la Kavinsky, and there are no bangers here, or - if we're honest - much that will imprint itself upon you when you've played it through a few times. Sweatt speaks of wanting audiences to "feel something in a personal way that might scare them a little, something they're afraid to face within themselves." In the anonymity of California Chrome's metropolis, you might never find exactly what it is that you're afraid to face. And that's a pretty scary thought.