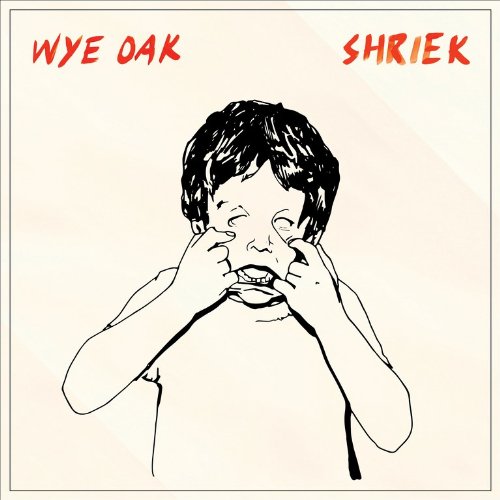 It’s been a monumentous (yep) few weeks for Baltimore. Back at the ass-end of March, we had Future Islands’ flawless Singles, a pop tour de force with heartfelt clout and a drizzle of ‘80s new wave. Now, as we near April’s dusk, fellow Marylanders Wye Oak are dropping Shriek, their fourth studio full-length, and their first since 2011’s Civilian (which went supernova in the TV OST world).

Baltimore is an oft-overlooked city in global media, for some reason – considering it s cultural output, it should be star-shaped on maps: John Waters, Julie Bowen, All Time Low, the guy behind Elmo, Mr. Pineapple from Counting Crows, Parker Posey, The Hoff, Phillip Glass, The Wire, Frank Zappa, Sisqó... if these aren’t enough to finally make the city a bona-fide East Coast hub, then the two-pronged assault of folk duo Wye Oak should do it.

The most obvious change over the past three years is the overall timbre of the twosome. Gone are the acoustics, guitars and hallmark folkisms; with Jenn Wasner swapping six-stringer for bass guitar, the tone of Shriek is a far cry from that on Civilians. For the most part, this new LP is electronic – not often employed by wandering minstrels and similar purveyors of folk – yanking the pair towards unbroken ground. This fresh sound is the product of intense instrumental experimentation and separate writing sessions; the tactic has led to a blossoming synthpop not unlike the sweeter moments of Chairlift. It’s hazy, smoke-addled electricity – there’s a distinct lack of quaint, charming or rural noises here, and despite the lurch away from familiar territory, it’s fantastic.

Lead single “The Tower” resembles a spasmodic 2014-style St. Vincent jolt. Offbeat synths and grunge bass licks mingle behind the swarms of wooze; Wasner’s vocals are characteristically sublime, and thriving in this alien environment. “Glory”, another pre-release cut, is a shimmering pop charmer. Again heavy on the bass’n’synth relationship, there’s a similarity between this dulcet pop tone and Arthur Beatrice‘s moody indie-disco. They’re not exactly alike, but the tones and structures are linked: dark and brooding suddenly erupts in technicolour glory. This is huge synthpop, pure and simple – there’s absolutely no reason to be put off if you’re a massive fan of their prior style, as this is simply grand. It’s still the same Wye Oak weaving immense sonic tapestries, but they’re approaching it with spangly methods, guile, and poise.

Of the ditties that haven’t been released yet, there’s a multitude of wonder: a rollicking, QOTSA-dark desert-rock bassline underpins unhinged, gravelly chaos on “Paradise”, bright-light melancholia is the name of the game on “Logic Of Color”, “Before” splutters with arrhythmia, heavenly drones and staccato bass, and the title track’s tropical bliss floats on for eternity. Shriek is a varied record, riddled with experimental tangents – nothing that explores completely new territory, but it’s new for Wye Oak, and they approach every digression and discovery with wide-eyed tenderness. It’s not naivety, but rather a genuine sense of awe and enthusiasm. They’re never heavy-handed when it would be oh-so-easy to do so – that’s that trademark Wye Oak restraint chaining them to their former selves – and Shriek prefers to dabble in subtleties, even when the pop is whale-sized.

Wye Oak’s fourth album has been in gestation for a hefty dollop of time. In those years, they’ve evolved leaps and bounds as musicians. On Shriek they giddily explore all manner of virgin realms, straying far from their roots when it comes to instruments and genre. However, they’re still very much the same band in some ways: chiefly, that they are keenly aware of when to hold back and when to let go. Their sense of suspense and timing is impeccable, and it allows them to craft gigantic pop tunes with a deft touch and sheer class. Shriek is perhaps not what we expected from a Wye Oak record, but it’s blinding nonetheless, and, while destroying any preconceived notions of the band, lodges itself near the top – if not at the top – of their canon.