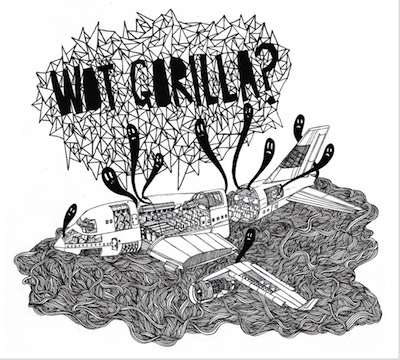 It seems crass to open a review of a promising EP with a flurry of related name drops but it’s necessary, and certainly not to Wot Gorilla‘s detriment: Meet Me In St. Louis, Mutiny On The Bounty, This Town Needs Guns, Minus The Bear, Colours, Tubelord.  I am of course referencing the best in (mostly British) math-rock, because Wot Gorilla are certainly carrying the torch.  Math-rock is one of those genres in which the conventions are quite defined, but it’s also a case of ‘not where you take your influences from, but where you take them to’, and these guys aren’t stuck in the past.

This EP, entitled New Arrival (whether a statement of intent or allusion to something else is unclear) certainly borrows plenty of beats from all of the above.  Yet, crucially, the end result still sounds like ‘Wot Gorilla’ as opposed to a crude amalgam of their favourite bands.  Sure, some of the polyrhythmic guitars lines sound like Minus The Bear and the at time softly crooned vocals call to mind Joe Tubelord’s, but this quartet from Halifax have made a smart choice.  In not trying to succeed purely by dint of having more of everything, Wot Gorilla artfully combine parts that are stripped down in their own isolation.

The effect is very, very listenable, as their song-writing approach isn’t so scatter-gun that you have to listen each song ten times before you start to get a handle on the hooks and structure, but nevertheless there’s plenty of dense, intricate passages to slate your melodic math-rock thirst.  From the almost ‘Battles’ esque percussion and cyclical riff of EP opener ‘Fear Of Flying’ to the excellent, frenzied opening followed by compelling vocal melody of ’3 DAB’s And A Chang’ that calls to mind a less regional and more catchy Hot Club De Paris, this EP has a plethora of music ideas that can be dissected or allowed to wash serenely over you, and remain as effective either way.

Whether you’re an aficionado of the genre or not, I think it’s fair to say that with this kind of music it’s more evident than ever if you’re not confident and if you don’t know your shit.  Wot Gorilla’s second EP is a confident and rewarding effort and suggests the band will grow to be worthy successors of the recently too-quiet british math-rock scene.  Despite the annoying band name and pitch-perfect crypto-nonsense song titles, the music still stands tall.  Depending on your relationship with those bands in this review’s introduction, this EP will either scratch a fairly long-standing itch, or act as an accessible entry point into the scene.  Either way, it comes much recommended.