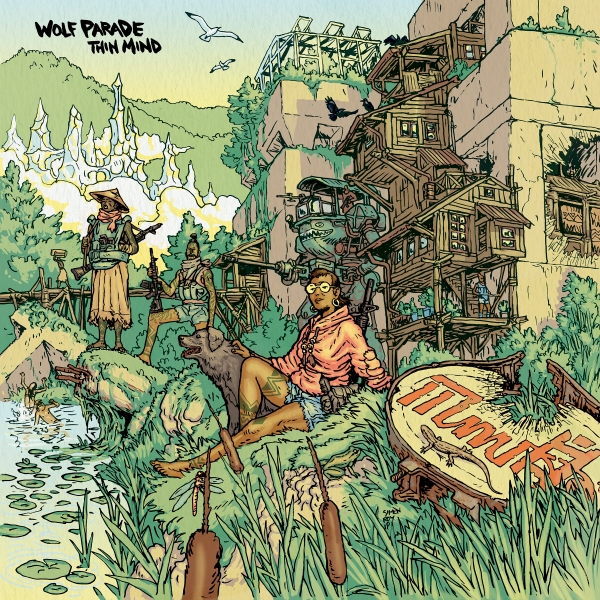 Montreal’s indie-rock flag bearers tackle the challenges of a rampant tech age, while championing the synth-powered singularity that made their name.

Thin Mind’s concept is rooted in what can be described as an ever-increasing over-dependence on technology; a transparency of substance and general emptiness derived from the online world. Inescapable access to digital content and its myriad effects on humanity is a topic firmly on the collective radar at the moment; MGMT notably exploring the premise on Little Dark Age’s “TSLAMP” - a satirical swipe on the smart phone’s all-consuming glare. In a similar vein, the Canadian trio tap into issues broadly underrepresented but proving increasingly ripe for consideration.

Twinned with a sound redolent of their first three records, Wolf Parade revisit a phase that earmarked them as one of the more sublime acts of their cohort. Initial standout “Julia Take Your Man Home” kicks the album into a triumphant, full-throttle resurrection of the band’s retrograde power-pop peppered high notes, flushed with driving synth and guitar licks; Dan Boeckner’s commanding baritone grandeur remaining in fine-tuned reverential form. Nudging murmurs of At Mount Zoomer and to a lesser extent Expo 86 emerge as guiding forces; frantic, wavering, ominous tones that eschew the atypical path trod on Cry Cry Cry.

Elsewhere, the electronic dazzle of “Wandering Son” leans on late '70s/early '80s post-punk, reminiscent of bands such as The Cars and The Tubes; themes firmly plugged into a contemporary, Blade Runner-riffing dystopic state: “Everything you do is automatic / No one really needs you now / And all your days will wash away like tears in the rain”. Disco-dabbling “Under Glass” bounds with Blondie-esque glitz, while a flood of synth juice pumps through “Forest Green”, accentuating rather than undercutting its focus on environmental loss: “Farewell to Forest Green / No more oasis in the Anthropocene / Only flat black glass”.

Drummer Arlen Thompson has framed the latter track within the context of a competing interplay between ecological and business interests; a relationship drawn from personal experience on Vancouver Island, which has figured as the band’s base for several years. In this respect, a pervasive sense of loss and future fear trickles through the band’s fifth album – the modern condition presented as a precarious conflation of foreboding emotions; a balancing act between insecurity, jeopardy and resignation. The latter can admittedly be attributed to several Wolf Parade releases to-date, but Thin Mind confronts an oppressive existence that is not only imminent but unfolding.

In reverting to the original gang of three, Wolf Parade have symbolically and sonically returned to a template that feels as organic as it did with their debut, fifteen years ago. Thin Mind speaks to the concerns of an age fraught with ennui and commodification; much-needed social commentary scored with the understated, melodic, often allusive edge that is the outfit’s creative stamp.