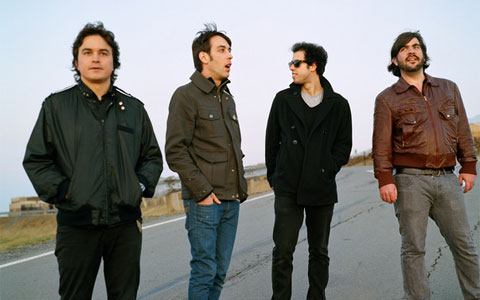 Surfing the Canadian, Pitchfork-induced alt-rock wave with indie pedigrees such as Arcade Fire and Broken Social Scene, Wolf Parade’s debut, Apologies To The Queen Mary was as damn near perfect as an indie rock record could ever hope to be. Sublimely teetering between Arcade Fire’s affably raucous rock and Broken Social Scene’s hazy, hipster noodling, it managed to be both as bulky as any Springsteen anthem, and as sugar-paper flimsy as any Cocteau Twins coo. And was there ever a musical pairing as dynamic and divine as Krug and Boeckner? Together they were perfectly symmetrical, Krug’s moon-faced flights of fancy perfectly balanced by Boeckner’s sleazy, bluesy riffs – put simply, in that fleeting summer of 2005, they were absolutely perfect.

Three years later, and things aren’t so simple. On Apologies’ follow-up, the tortured and gauchely-titled At Mount Zoomer, the scales tipped. The album zig-zagged catastrophically between bucolic, sweetly epic electronica (not dissimilar from Krug’s main band, Sunset Rubdown) and colossal classic rock, redolent of Sleater-Kinney’s The Woods or the more jagged strain of early 90’s brit pop – although it wasn’t without it’s moments (the triumphant, stately ‘Soldier’s Grin’ being one of the few bright patches in the otherwise grey mesh of incongruities and uncertainties) it still had the sour tang of two song-writing monoliths bickering over each other’s disparites, almost like a divorcing couple dividing up their shared belongings – Krug kept the gauzy, spaced-out bleeping and Boeckner kept the raw, rough-edged riffs – all this posed At Mount Zoomer as a tragic farewell rather than the foundations-shattering comeback it should’ve been.

So, onto ‘Expo 86’: Imagine if Bruce Springsteen hadn’t have been as stadium-floodingly popular as he so obviously is; envision him instead as an artfully disenfranchised young student, his rage at the hopelessness of the American dream funnelled through the lissome prose of classic literature, and you have Wolf Parade’s third offering. It’s the same, paradoxical formuale of poetry and brawn that plauged Wolf Parade in their sophmore release – but unlike Zoomer’s lurid disjointment, Expo 86 finds Krug and Boeckner finally shaking hands and reaching some kind of reconciliation.

The album opens on the racous ‘Cloud Shadow On Moon Mountain’ – which, depite having the kind of title you’d expect a group of weed-reeking proggers to come up with- combines the shattershot call-and-response vocals that graced Arcade Fire’s ‘Laika’ with the kind of lyrical surrealism that made Krug’s oblique Marimbas and Shit-Drums EP equal parts willfully bizarre and insatiably compelling – “You gotta jump over the island like a new long-legged gazelle!” Krug bleats. “But you will never be reborn as a scorpion.” Alright Spencer, whatever you say…

Whimsy aside, there’s a supple grace in Wolf Parade’s lyrics that infuses with their music, no matter how much Boeckner might toy with dragging Wolf Parade in the bleak vincinity of the dreaded bar band –  take Krug’s sensuous description of holiday towns as “giant shining earrings against the cheek of the sea” on the barbed ‘What Did My Lover Say? (It Always Had To Go This Way)’ which shimmers through the Boeckner’s grimy riffs and Krug’s yelped vocals like a clean, brackish sea breeze, wafting from behind a great hulking oil rig.

Expo 86′s case is significantly aided by some balls-out brilliant songwriting – take ‘Little Golden Age’, which finds Boeckner churning out some seriously mega riffs, and Krug eulogising “A place long, long ago/ where nothing moved and time went slow”. As usual, he’s as potently evocative as ever, his lyrics providing musical snapshots rather than wan narratives – the verse “then you left town feeling pretty down/ with your headphones and your coat and your dirty graduation gown” reminiscent of Matt Berninger’s devastating lyrical sparseness – and late-album highlight and recent single ‘Yulia’, who’s tinkling guitars and yelped “WOAHS” swagger along like The Edge jamming with Avey Tare.

All in all, Expo 86 is the album Wolf Parade were always meant to make – neither buoyanced by the incredible serendipity that preceded Apologies To The Queen Mary nor the abhorrent lack of focus that flagged At Mount Zoomer, Expo 86 finds Wolf Parade finally settled on a middle ground- and by God, it suits them.

Wolf Parade: ‘What Did My Lover Say? (It Always Had To Go This Way)’ 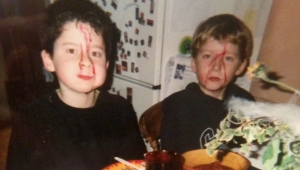