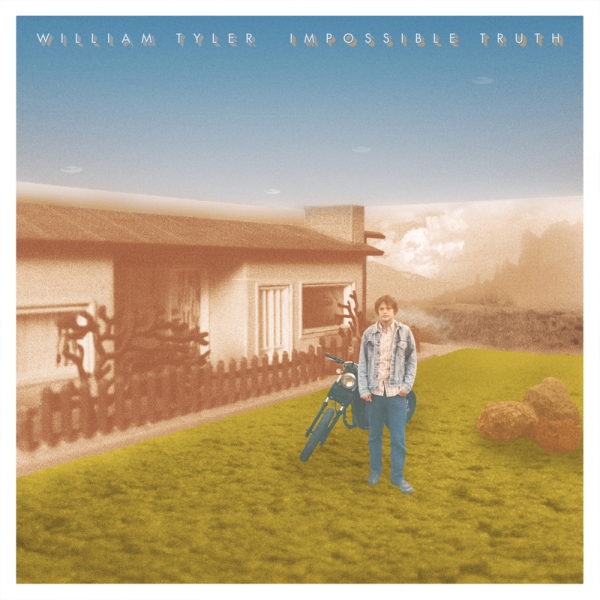 For a relatively young man, Nashville’s William Tyler has seen a fair bit of action in his time as a musician.

He’s perhaps best know as a decade-long sideman for Lambchop, Bonnie ‘Prince’ Billy and The Silver Jews, which gave him limited room to show off his exceptional talent as a guitarist while letting him tour and record with kindred spirits who share his interest in a certain strand of Americana. Since then he’s released his solo debut Behold the Spirit: a discourse in six and twelve string guitars and a look at myths and legends, ostensibly a “folk” record that led to whispered comparisons to the great John Fahey (William, I promise that’s the only reference I’ll make to that artist) but also to current fellow travellers such as Ben Chasny of Six Organs of Admittance. On second album Impossible Truth Tyler looks again to the past for inspiration, but this time the more recent past.

The album finds a post-Carter USA under the microscope. Tyler was born in 1980 as a new America took shape under the Reagan Administration, and alongside those changes a series of books inspired the music found on this record: Barney Hoskyns’ Hotel California and Mike Davis’ The Ecology of Fear (two books about the sunshine state, that take extremely different looks at a disintegrating society), but also Cadillac Desert by Marc Reisner, a look at the devastating effects of land and water development policy on western USA, and James Kunstler’s The Geography of Nowhere which speaks of how the country’s desperation for advancement led to the death of community. It’s a certain brand of nostalgia, sure, and Tyler is certainly fascinated by the late ’70s and early-to-mid 1980s but focusing on those aforementioned influences means it’s definitely not a romanticised version of the period. You might think it’d be hard to create a song cycle about the decline of the American empire on what’s a purely instrumental (and almost completely guitar-based) record, but over the course of 54 fascinating minutes Tyler takes us completely into that world without any disconnect, on a brilliant journey into the recent past.

Opener ‘Country of Illusion’ is a bluesy beginning, with Tyler operating between intricate finger-picking and short, punchy strumming that goes from British folk to US country music and back again, then the stirring ‘Geography of Nowhere’ has a pattern that echoes ‘Paint It Black’ in its flamenco melodies. ‘Cadillac Desert’ is a beautifully hopeful track that shimmers with pedal steel as it builds and fades across six minutes of inspirational playing; this track and the following ‘We Can’t Go Home Again’ – with its barrelling folk riffs – recalls David Pajo’s work as Papa M on his excellent Live From a Shark Cage record. It shares an urge to reference then deconstruct the past, turning something old into something fresh and new, and it succeeds beyond all expectations. The latter track is joined by ‘A Portrait of Sarah’ in being a solo showcase for Tyler’s stunning virtuoso playing: it’s been a long time since I’ve been so enraptured by solo guitar, and time seems to bend and shift while listening to these passages of music. Six minutes seem like two, and a record that lasts for nearly an hour seems to pass by in the space of an album of ten three-minute pop songs – now that’s full immersion in someone else’s world.

The crowning glory of all this is the ten-minute closing track ‘The World Set Free’. On this, Tyler begins with simple acoustic patterns before building with electric guitar, pedal steel, then brass and some spluttering drums as a melody appears out of the haze. It moves from undoubted gorgeousness to a squalling psych rock conclusion and never once outstays its welcome.

Impossible Truth seems made up of melodies, chords and patterns that have always existed, whether it’s now, the ’70s and ’80s, or even earlier. What William Tyler does is reach back into the past with complete honesty, and by doing so he’s able to create new and exciting sounds from the social, political and geographical changes of a particular period. He’s a towering talent, not just as a guitarist, but as great American storyteller.