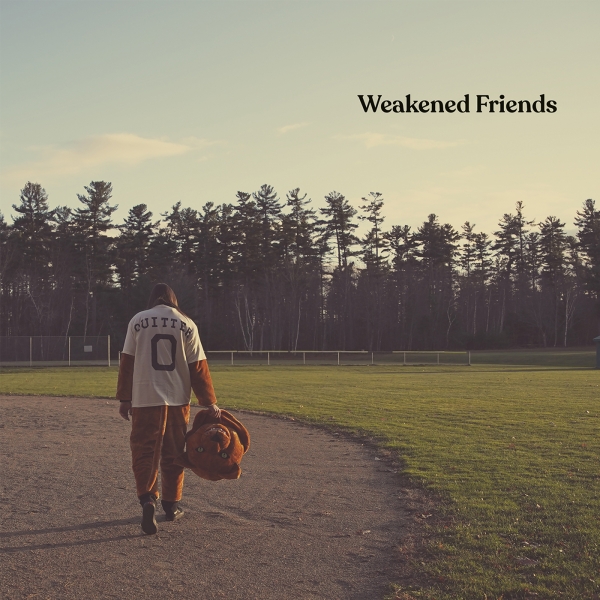 ​​​​“If it’s all for a purpose / why do I feel so burnt out?” asks Weakened Friends frontwoman Sonia Sturino on “Quitter”. While it’s referring specifically to almost thankless grind that comes with being in a band, it’s a familiar notion for almost anyone who works in the music industry as well.

It’s also the narrative backbone of Weakened Friends’ second record Quitter; the empty threat of quitting music to “grow up and get a real job” both a central theme of the album, and a recurring thought for those of us who sold our soul to the industry years ago.

Indeed, while the idea of combatting a sense of arrested development by getting said “real job” might well appeal on paper, it’s also something that Sturino knows is better in theory than in practice.

As such, Quitter is a record that bristles with both a fragile vulnerability, but also a defiant sense of self-awareness. For the most part this defiance is something to be celebrated, but it hasn’t come without its negatives either. Her drive and her passion have seemingly cost Sturino multiple friendships. It's these which inform a large part of the record, with tracks such as "Everything is Better” addressing the issue with a sense resonance but also with the same wry self-deprecation that punctuates the record on occasion.

Elsewhere, opener "Bargain Bin" is an emotional and emphatic introduction to the record and an early highlight, building from the outset, before culminating in rousing and cathartic conclusion. "Spew" provides a snottier scuzzier side to the band; the cynicism that’s been bubbling under the record’s surface finally erupting in a torrent of sweet/sour indie-pop that’s impossible to ignore.

Certainly, the same could be said for the record as a whole. Though it might be called Quitter, the sheer urgency and energy harboured by Sturino, Annie Hoffman (bass/vocals) and Adam Hand (drums) show that they’re anything but. And while it seems comparisons to bands such as Waxahatchee or Diet Cig certainly aren’t unfounded, those acts peddle in a brand of indie-pop that feels a little more twee than anything Weakened Friends have on offer here.

Instead, comparisons to bands such as Muncie Girls might be more accurate (despite the best attempts of album closer "Point of Interest") but the reality is Weakened Friends are very much their own band, and Quitter is very much the sound of them coming into their own. A bold, brash and ballsy release that will resonate with anyone who’s worked in music. A late contender for Album of the Year? Definitely.